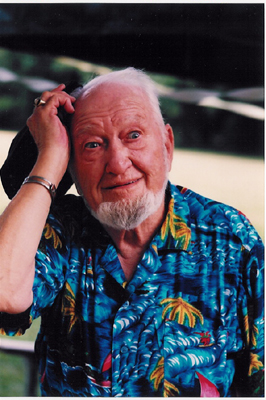 Martin Luther King, Jr. once said "The ultimate measure of a man is not where he stands in moments of comfort and convenience, but where he stands at times of challenge and controversy" There can be no memorializing my father without speaking of how he dealt with challenge and controversy. In my time on this earth, I had never known my father to shirk from his responsibilities. I have never known him to be beneath doing whatever he needed to do to care for his family. There was no job to menial, no task too difficult. But above that, I never knew my father to turn away from facing the demons that plagued him throughout his life. Yes, there were times when my father walked on the dark side, but as the bible says, "Let him without sin cast the first stone".

Above all other things, my father cherished his family. His love for my mother, for my brothers and sisters, and for me, was unwavering and without condition. There was nothing he would deny us and no struggle to great to protect us. Especially where I was concerned, I'm sure there were times where my father didn't like us very much. But not one of us ever doubted just how much he loved us.

Of all the things I am grateful for, I am most grateful that my father lived long enough to see each of his children grow into loving spouses, caring parents, and compassionate individuals. I'm grateful that he lived long enough to witness the lessons that he and my mother instilled in each of us, to watch them take root and help us develop into the people we have become. My father was fond of giving my mother all the credit for raising us, and while it's true that my mother worked hard to raise her children, no one could fairly discount my father's role in our lives, or in our hearts.

To have known my father is to know that he never had a cross word for anyone. He allowed people to have their feelings, and never passed judgment on them, even if they did not reciprocate. And while there were some who disagreed with my father on any number of issues, he never once spoke an ill word about anyone. If he ever cared for someone, he always cared for them, regardless of circumstance. This was not a conscious effort for my father, it was his nature, and it was the essence of his heart.

Oliver Goldsmith once wrote "The greatest object in the universe, says a certain philosopher, is a good man struggling with adversity; yet there is still a greater, which is the good man who comes to relieve it." There can be no question that the road my father walked at times was a difficult one. But what always amazed me was the courage my father showed in facing those difficult times. He took responsibility for his actions, something not too many of us can really lay claim to, and he did whatever needed to be done to make the situation right with himself, with his family and with his God. When he would emerge from the other side of these challenges, he did not rest on his laurels, and he did not pat himself on the back for his ingenuity in conquering his demons. Rather, he took the wisdom that only experience can bestow upon us, and he used that to help others that shared his path. He used it not to extol his virtue, or to set himself apart as a role model, but to help build a beacon in the dark for other lost souls.

For those of you that shared that road with him, I must tell you that you, more so than even his children, are my fathers greatest legacy. For you are now charged with the heavy responsibility of following in his footsteps. Of carrying the message, of showing to others the kind of love, support and understanding that he showed to you. It falls you to you to help ensure that the experience and wisdom that my father amassed in his time on this earth is carried forward. Always remember that in 20 years, there will be someone who was helped, by someone who was helped, by someone who was helped by my father. I can not think of a greater, more poignant tribute to all that my father believed and held dear.

As I was preparing thoughts for this, I was reminded of a poem that my father was fond of reciting when he would speak at A.A. meetings. I don't know who the original author was, but I think it bears reciting today as it so eloquently captures the essence of how I will remember my father: "He drew a circle and shut us out. Heretic, rebel, a thing to flout. But love and I had the will to win, we drew a circle and took him in". My father drew many circles in his life. He drew in many people, and offered them his experience, his strength and his hope. He gave his love and support without condition, and rejoiced in the success of those he loved.

My father taught me many things in my life; lessons that I've held close to my heart. With those lessons, I've gone many places, met many people, and done many things. But of all the things I've done, and of all the things I am, that thing that I am most proud of, is that I am my father's son. To look at his life, and the man he was, and to hope that I could demonstrate the sort of gentle love and kindness that was my father's hallmark.

On his prayer card, it says "As long as I have the love of each of you, I can live my life in the hearts of all of you". As I believe that, I also believe that my father's spirit and all that was good and right about him, will live on forever.