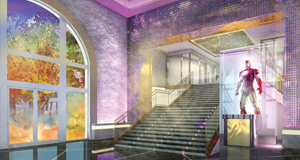 Planet Hollywood has been closed at Disney Springs for almost a year as it is being remodeled into Planet Hollywood Observatory. Reservations are now open for January 3, 2017 and beyond.  A few weeks ago, we announced that reservations were open for December 1; commenters on the original story report having been able to make them for December, so it appears that the restaurant might be releasing them in stages as part of a soft opening.  Either way, it looks like Planet Hollywood Observatory is making its way toward an official opening soon.

Are you looking forward to trying out the new menu?