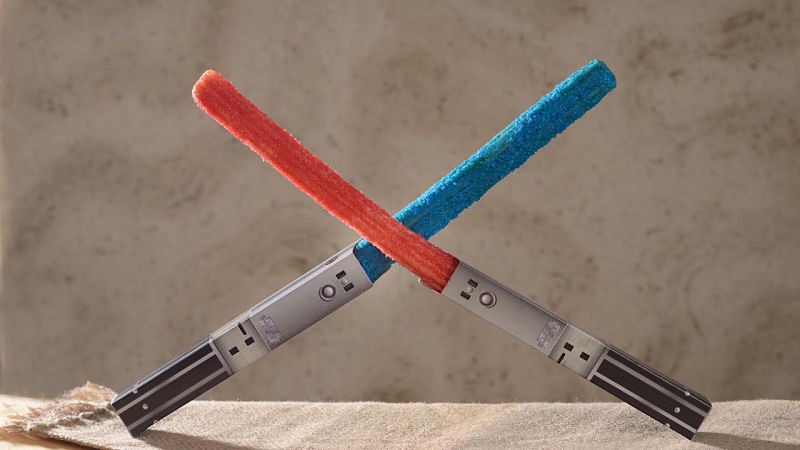 ShareTweetSubscribe
On December 16, the special ticketed event, Star Wars: Galactic Nights will once again take over Disney’s Hollywood Studios. Those planning on attending the event will have a wide variety of uniquely inspired Star Wars-themed snack and food options to choose from! First, the Lightsaber Churro is back! This popular snack option from last year will be returning. Guests of the event can choose either a red or blue sugar-covered churro, which resembles a Lightsaber. Additionally, a Lightsaber Churro Sundae will be offered this year, which is “a vanilla ice cream sundae topped with chocolate sauce and red and blue churros.” Another snack option is the Sweet and Crunchy Popcorn, which was inspired by the iconic garbage chute scene in Star Wars: Episode IV - A New Hope. The Tatooine Bisque is inspired from…you guessed it the planet of Tatooine. More specifically, the moisture farming that takes place on the planet. The bisque is a thick cream soup made with pureed rutabaga, turnips, carrots, and parsnips. Of course, there are Star Wars-inspired beverages as well including Jettison Juice, which is a watermelon lemonade served with a Death Star Glow Cube. Guests 21 and over can enjoy the Skywalker Wine Flight which is a Sommità Chardonnay, a Pinot Noir Rosé, and a Sommità Pinot Noir all from Skywalker Vineyards in Marin County, California. If several of these items have intrigued you and you’ve decided that you can’t just pick one or two, consider trying the Galactic Tasting and Viewing Package. This sampler package will give you a taste of five items with over 25 options to choose from! The Galactic Tasting and Viewing Package can be booked online or by calling (407) WDW-DINE. Again, these items will only be available at the Star Wars: Galactic Nights event on December 16, 2017, from 7:00 p.m. to midnight, so if it is something you’re interested in then you’ll most likely want to book as soon as possible before tickets sell out. Credit: Disney Parks Blog
ShareTweetSubscribe