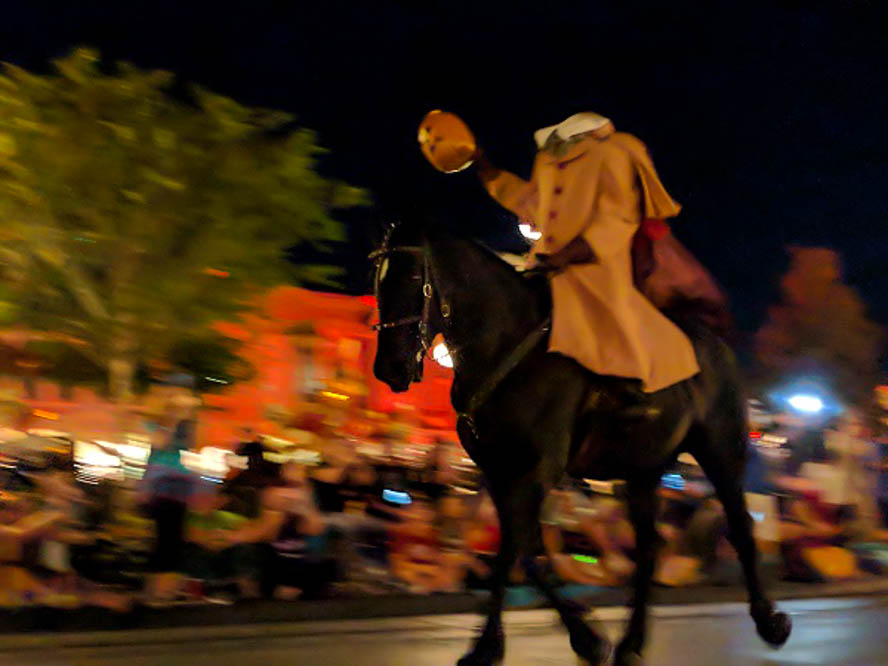 ShareTweetSubscribe
The first Mickey's Not So Scary Halloween party has come and gone. Walt Disney World added three new attraction "overlays" to this year's party and the reviews are...not great. The Mad Tea Party added some lights, Space Mountain turned out the lights, and Pirates of the Caribbean added three live pirates to the queue and attraction. If those overlays weren't quite enough for you, what would you like to see? I have a couple of my own ideas that I think would add to the Halloween atmosphere around the parks. "it's a small world" Come on, we were all thinking it; I'm just saying it out loud. Change the sign from "The Happiest Cruise that Ever Sailed" to "The Most Grateful Cruise Just to Survive." Turn the lights down real low. Add plenty of fog seeping over the water and over the bow of the boats. Turn down the tempo of the music by about half to give it a surreal quality. Position some strobe lights in strategic spots. Is that doll coming closer? You aren't sure, but there! That one stretched out its arm towards the boat. You hear a splash in the water ahead. The lights go out. You hear splashing coming closer to the boat. The boat starts to thump and shake as if little hands are scrabbling to get aboard. The lights flicker and a puff of air sweeps by your face. Now the lights are flashing red. All of a sudden you emerge back into the main loading area. You've never been so relieved that a ride is over. The song is going to stick with you, and all of a sudden you find yourself wishing for the happy tune of the original. Big Thunder Mountain Railroad: Ghost Town People love to ride Big Thunder Mountain Railroad in the dark. It's a whole different experience than riding during the daylight. So why not just give it a spooky twist for the Halloween season? As soon as the sun goes down, a prospector comes out to the entrance of the queue. He will tell the story of the flood that destroyed the small town of Tumbleweed and its subsequent haunting. The attraction will be engulfed in fog and eerie lighting effects. A mysterious song will also play. For those brave enough to board the train, you might catch a glimpse of ghostly apparitions in the town as the train rushes by. The ghostly apparitions could be easily done by projections. While this overlay wouldn't be groundbreaking, I think it'd add a little extra flair to the MK come party time. Country Bears Halloween Hootenany Who doesn't want to see Big Al in a Halloween costume? With that image in your mind, I'd like to introduce the Country Bears Halloween Hootenany. Come join the bears as they show you how they celebrate Halloween. The Bear Band could do a great job dressed up as classic monsters (think Frankenstein, Dracula) and sing "The Monster Mash." Teddi Berra would be cute dressed as a black cat. She could sing some verses from "I Put a Spell on You." I kind of want to see Trixie with some Eeyore ears; I think she could pull off the persona. Trixie could do a good job with "Sally's Song" from The Nightmare Before Christmas. Though I would absolutely love to see Big Al in a costume, I have no doubt that he'd be that lone person to show up at a costume party without a costume. I'm also pretty sure he'd just stick with his old timeless classic "Blood on the Saddle." ExtraTERRORestrial Alien Encounter This is a no-brainer. Alien Encounter is the attraction that used to occupy the space that now houses Stitch's Great Escape. It wouldn't be too difficult to bring it back for the Halloween season. All Disney needs to do is drag out the alien animatronic and change the effects/sounds inside the theater. As you may have heard, this attraction was terrifying for adults and children alike. Seriously, it had blood splatters. It was very intense. Bring. It. Back. You may have noticed that I've jumped over to Hollywood Studios. I think it's time that WDW stopped confining Halloween to MK. Let's allow the other parks to play too, shall we? Toy Story Midway Mania of Terror Midway Mania is an easy choice. The attraction is screen based, so it won't take much to change it over. I'm basing this overlay off the made-for-TV special, Toy Story of Terror! If you never saw the special, Mr. Pricklepants is a horror movie expert and he narrates the action during the show. In my overlay, Mr. Pricklepants would narrate. He would explain classic monster movies and let the riders know the best way to conquer these monsters. Each game screen will feature a class monster, so instead of throwing rings around the green aliens, you'll throw silver hoops around cartoonish werewolves. A couple other ideas are wooden stakes into vampires, or a jet of water for the witches (Wizard of Oz rules). Too bad proton streams for ghosts is probably trademarked. The Three Caballeros Presents Dia de los Muertos I'm very excited about this idea. It's also very easy, since it just involves screens. The premise of the attraction can be quickly explained in the queue with some new posters and banners. Miguel has been invited to perform with the Three Caballeros in a special concert for the night of Dia de los Muertos. The rest of the attraction will follow Miguel and his dog, Dante, as they try to make it to the show on time. Miguel somehow manages to run all over Mexico, but he does make it on time for the show. The ending will still have the three Caballeros animatronics, but they will be performing a new song and Miguel will be performing along with them on the screens behind them. I would also love if there were orange petals streaming down from the sky in this scene, showing that the beloved deceased have come to listen to the concert. Since Disney likes to make money with food booths, they can set up a little festival area outside of the attraction and add another food booth featuring traditional Dia de los Muertos snacks. The Sanderson Sisters The Hocus Pocus show at MNSSHP has proven to be very popular. They can bring some of that fun to Epcot. The outdoor American Gardens Theatre would be a fantastic place to do a stage show featuring the Sanderson Sisters. A historical expert could begin the show by explaining America's history with witches. A few minutes into it, the Sanderson Sisters will interrupt and take over the show. Shenanigans ensue. You know the drill. The show will be performed several times a day and could even feature a meet and greet with the sisters at the end of the show. Once again, Disney can capitalize on this and add a Halloween treat food booth next to the stage with traditional Halloween treats and drinks. Mission Space: Alien Edition Let's get creative here. Disney just acquired Fox. I know this will never happen, but how great would it be if Mission Space had an Alien takeover. Instead of a normal, everyday trip to Mars, your spaceship will respond to a distress call and have to fight off an attack from an Alien. Better not let that thing onto the ship. It's Tough to be a Ghoul As a Disney fan, I know it's tough to be a bug; however, it's also tough to be a ghoul. This can be a new 4-D show hosted by the Haunted Mansion's hitchhiking ghosts. They'll talk about how hard it is to be a scary entity, especially around Halloween. Traditional Halloween Critters Animal Kingdom loves to educate. Halloween gives them a great opportunity to further this goal. The animal experts can give a talk on the music stage in Discovery Island. The cast members can bring out animals that have been given a bad name by Halloween traditions. Animals like bats, black cats and spiders. After discussing why that particular animal is associated with Halloween, the animal expert can praise the animal's good, helpful traits. After the show, the kids are invited to come up front for a closer encounter with the animals. What do you think? Would you look forward to any of these attraction layovers, or do you have better ideas?
ShareTweetSubscribe