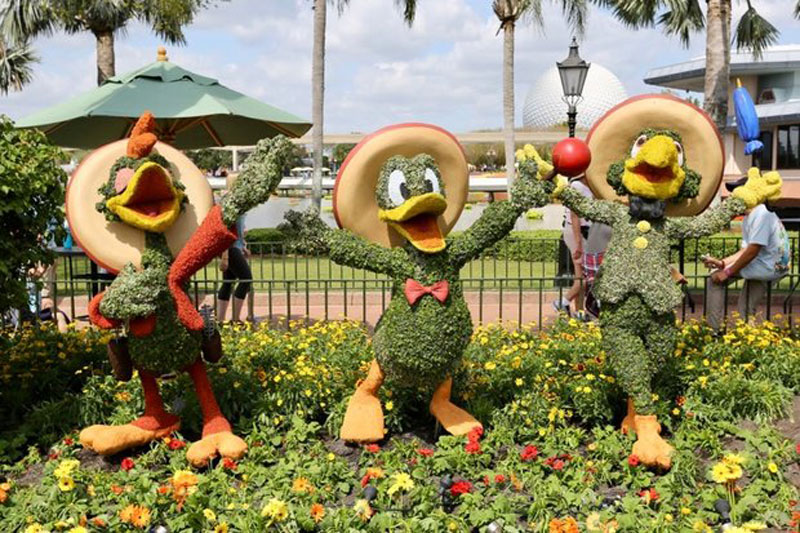 ShareTweetSubscribe
I recently returned from a week long trip to Walt Disney World with my family and as always, it was a blast. My wife and I are annual passholders, and therefore frequent the parks whenever possible, but in the case of our family, they are only able to make the journey every two to three years. This being the case, they are unsurprisingly creatures of habit whenever they find themselves in the "Happiest Place on Earth," and certainly, I cannot in good conscience hold that against them. They want to ride certain rides, eat at certain places, and attempt to re-create their previous vacations anytime they are lucky enough to make the trip. However, perhaps I have become a Disney snob, perhaps I am just a trend setter, but I have assigned myself in determination to ensure that I experience Disney in a different way on every given trip. Was this not the goal of Walt Disney? Can we honestly say that he did not want his Imagineers to create not only a play place for both children and adults, but one that would allow for an ever-changing, customizable vacation with every return? Can you blame me for not wanting to repeat the exact same calendar of events beginning with driving down I-95 at great personal risk to myself? With this in mind, I set out to accomplish one goal during my most recent vacation: to introduce my family to some new aspect of Disney that they had not previously enjoyed. The funny thing is, they are my wife’s family and they have been going to Disney since before my wife was actually born. (Their trip count is now somewhere in the thirties.) As for me, I did not grow up going to Disney and it was, in fact, this family who introduced me to the Walt Disney World Resort to begin with. So therefore, you can understand my motivation to take a group of people who have literally gone to Disney more than anyone else that I know and force them to get outside of the box. After all, as we all know, Disney is an expensive trip. Somehow, as a self-acclaimed connoisseur of Disney, I feel it my personal obligation to help anyone visiting the resort with me to enjoy their experience to the fullest and to not only understand the reasoning behind the price, but to come to appreciate the exclusivity and premium nature of it. Now you may already be screaming at the computer screen as you read this saying, “What is it? Tell me!? What happened?” Well, let me just start by saying, this was far more complicated than I had originally imagined and I caution anyone attempting the same feat to not allow this charge to overshadow your overall vacation. While “plus-ing” your trip may, in my opinion, be an important aspect of any Disney adventure, convincing your family to do the same is not worth the arguing and repeat statements of, “I payed $5,000 for this trip!” Nevertheless, after a couple of days of playing into their habitual repetition, inspiration came in the most obvious of all places — a rainstorm. Halfway through our week, we had planned to take a full day in Disney's Animal Kingdom in order to see Pandora, ride Avatar Flight of Passage, and enjoy Rivers of Light. In fact, we had booked the FastPasses three months in advance, so this was already a day I had intended to be my absolute highlight for the trip. Beyond this, we had also planned an early morning doing something else very unique and new to the Disney experience: cake decorating at Amorette’s Patisserie. I must take a moment to brag about the incredible opportunity that this turned out to be. This is something you must book in advance and there are only so many days that Amorette’s has this class per week, with seats also being limited. However, it is $150 per couple, you keep the chiffon cake which you decorate to look like Mickey Mouse, they teach you all about how they make it, give you a class on the decorating, tell amazing stories of themselves as cast members, and give you an excellent background story for the bakery itself. I thoroughly enjoyed this experience and would highly recommend it to anyone who is a fan of pastries and/or Amorette’s in general. Getting back to my story…it was during this class, which began at 9am, that storm clouds began to amass all around the Disney Springs area. Darkness set in as if to retell the horror of Chernabog and Bald Mountain, and given the rolling thunder and flashes of lightning, we quickly understood that the trip to Animal Kingdom would be a waste of a ticket for my family, who only had six days of tickets for our seven-day trip. My family members therefore came to the decision that they would take this day off and instead enter the parks on the day which we would be leaving. “We will just shop for a little bit and when it starts raining, we can go hang out in the room,” was the explanation given to me. It was at this moment that I decided to act. Indeed, the monotonous repetition of our trip had come to an end…where is my pixie dust!? I must turn this around! “No!” Said I, “we will not lose our animal adventure! To the Animal Kingdom Lodge!,” I exclaimed to everyone's great surprise. “Why would we go there?” they replied. And ignoring my inhibitions to such a statement, I simply replied, “Trust me.” And so we were off. We drove to the Animal Kingdom Lodge and began our adventure in the Jambo House. Did you know that Sanaa opens its restaurant with an African drum line presentation? Well, we found out, simply by adventuring downstairs in hopes of getting an early reservation. We were presented with the entire host team chanting, clapping, and drumming; to which we applauded, laughed, and sang along. After a fantastic meal highlighted by a phenomenal bread service and lunch entrees, we then ventured outside during a brief break in the rain. While talking to an animal expert on the Jambo House Savannah, we learned that there were baby Giraffes at Kidani Village and so, our adventure continued. We enjoyed a walk through the main resort’s gift shop, took in the sights in the lobby, and then ventured to the food court, where we enjoyed a dessert of zebra domes (mmmmm). After this we found our way to the pool area where the six- and seven-month-old giraffes were located on the Kidani Village Savannah. We stood watching them frolic through the grass and were told facts and figures from another animal expert, also stationed at the savannah. As I said previously, I had assigned this day to be the highlight of my trip and, in case you could not tell from my retelling, it was — just not in the way I had originally intended. It was amazing to hear my family telling of our adventures at the end of the day and to see the smiles on their faces while sitting around the dinner table at Port Orleans, enjoying a beignet sundae. “How did we not know about the animals at the Animal Kingdom Lodge?" they said. To which I simply chuckled and took pride in my accomplishment. In conclusion, I want to highlight the point of my article. Disney is not just a theme park, it is not just a grouping of high-quality hotels. Disney is a destination vacation and for good reason, because there is so much to experience once you get there. I encourage all who read this to not settle for the same trip each time you go because, while there is something to be said for the classics, we pay top dollar for the opportunity to visit Walt Disney World, and in my opinion, that means you should experience it as it was intended — as an adventure. Challenge yourself to change your vacation with every visit, “plus” it, just as the imagineers attempt to plus the park. Remember that Walt said the Florida project would be ever-changing and if there was one thing from his original idea which truly came to fruition, it was that there is something new to be seen, every time you go. You simply need to pack your patience, be flexible, and there will be new experiences waiting for you around every corner.