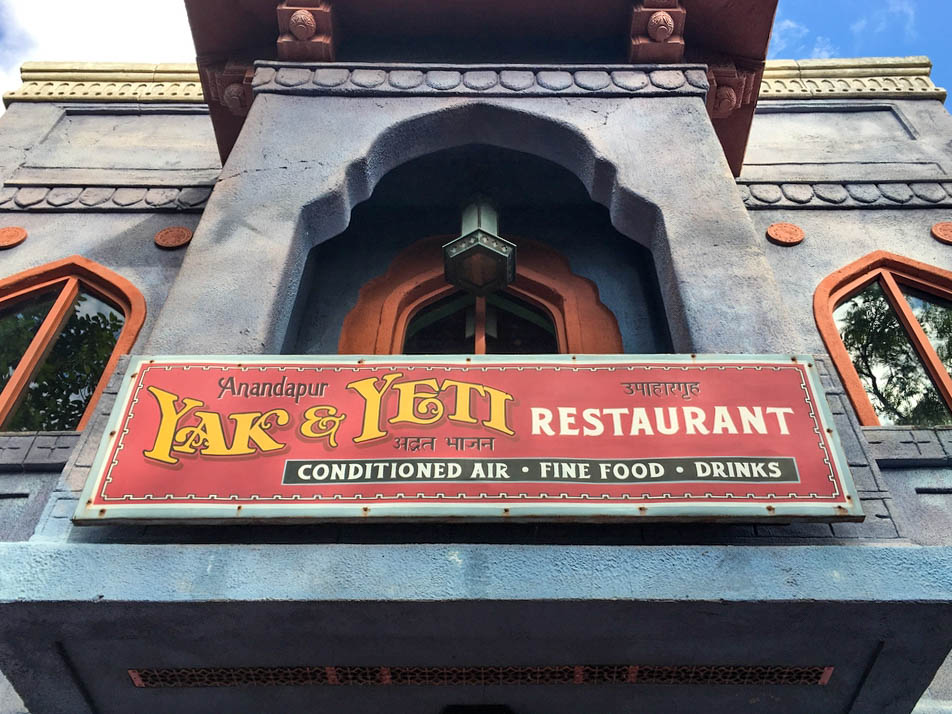 When it comes to Asian-inspired cuisine, theme parks typically don’t have a great track record. Chalk it up to the breadth of Asian food available in the world or the necessity for theme park food to be all things to all people, but there’s a reason why hamburgers and french fries are staples of the industry. Being of South Asian (Indian) descent myself, my wife and I jump at the chance to try new ethnic food at the parks whenever possible. During our latest trip to Walt Disney World, we stopped at Yak & Yeti for lunch and took note of our experience. I’ll give you my general impressions of the restaurant below, as well as how I would rate it as a food location in Animal Kingdom and at WDW in general. I’ve split the review into basic categories, so if you’re just interested in my overall feelings you can skip to the end.

Yak & Yeti is a table service restaurant located in Animal Kingdom specializing in pan-Asian cuisine. If you’re unfamiliar with the term, pan-Asian refers to the blending of several Asian cultures. While you won’t typically be getting authentic regional food at a pan-Asian location, you can expect to see highlights from across several cultures like Thai, Vietnamese, Taiwanese, Chinese and more. This location is a 1-Table Service Credit restaurant if you’re on the Disney Dining Plan, does not accept Tables in Wonderland, and offers an Annual Passholder discount (limited, more on that below). There is a quick service location for Yak & Yeti directly adjacent to the table-service location, but this review doesn’t really reflect that. For a video review of the quick service location, check out this video by Craig and Steve.

One more important distinction to make is that this is a Landry’s restaurant. That means the restaurant isn’t owned/run by Disney themselves, but by the Landry’s corporation. Other Landry’s locations include Rainforest Cafe and T-Rex, which should give you a pretty good idea of what you’re in for.

Yak & Yeti is situated in the Asia section of Animal Kingdom, one of the first things you’ll see as you enter that section of the park. Much to its credit, it can be easy to miss if you’re not paying attention. The building it’s housed in blends so well with the surrounding environment that you can easily walk right by it without even realizing it. Everything else aside, the theming here is definitely the draw. Unassuming from the outside, you’ll immediately notice on entering just how much there is to see. On the back of every menu is an elaborate backstory for the restaurant, but it essentially involves a wealthy traveler who sets up shop on his way to visit the Himalayas. You’re basically eating in his house, which explains why the decoration is so eclectic. Artifacts and tchotchkes are packed in every corner, and each have an incredible amount of character. It comes off as surprisingly authentic, and the detail in both floors of the restaurant is something to be admired. For as much fun as T-Rex and Rainforest Cafe may be for kids, subtlety is definitely not their strong suit. It may not be for Yak & Yeti either, but you can tell they spent a considerable effort in emulating the Disney style. Overall, we were thrilled with the decor and theming.

Service is a hard category to leverage against a Disney Parks restaurant, because so much of it is dependent on your cast member, time of year, and how crowded the restaurant is itself. I’ll include this here in case you want to factor it into your own decision. The day we visited was very busy at the parks, and there was a crowd gathered in the main lobby hoping to get a seat. We had made a reservation a month prior, and it took approximately 10-15 minutes from check-in before we were seated. Our waitress was nice but clearly busy, we only saw her at the important times (getting our order and delivering the check), and overall we were disappointed in the service as a whole. We did notice that she was waiting on several tables so we didn’t hold it against her, but we expect to see our server more often than the absolute minimum. Your mileage will vary, but our overall impression of the service was largely negative. At the end of the day, however, it’s all about the food. My wife and I wanted to try a few different options, and from our light researcher leading up to meal it seemed the general consensus was that the appetizers are usually better than the entrees. The plan was to try two different apps, a shareable entrée, and a dessert. You’ll notice we did not get around to the dessert, and there’s a good reason why. Our meal was for lunch, but if you’re interested in seeing the current menu for both lunch and dinner you can do so here. Our first appetizer was the Pork Pot Stickers ($9.99). We ordered them pan-seared, and they came with a soy lime dipping sauce on the side. Potstickers are a staple appetizer in the Chinese section of any frozen food aisle, as well as at most Chinese/American locations across the country. Much to our disappointment, these were probably the worst we’ve ever had. The dumpling wrapper on the outside was paper thin and the pork/vegetable filling was incredibly bland. In even the most mediocre of potstickers, you can expect a nice, thick dumpling exterior because that’s the part that requires the least cooking finesse. These couldn’t even be bothered to have that, and the dipping sauce was the only thing that made it edible. Even if they were average at best, for the price you’re paying ($2 a Potsticker), you can do much better. $10 per dish is about what I would expect to pay for an appetizer at a table service restaurant, and this was definitely not worth it. Our second appetizer was the Firecracker Shrimp ($11.99), which was only marginally better. Prior to our trip we had heard the overwhelming opinion that the firecracker shrimp are definitely the thing to get when visiting Yak & Yeti. From the pictures we had seen and the descriptions we heard, it was one of my most anticipated food items for the trip. The menu describes them as “Crispy fried shrimp tossed in a creamy, spicy sauce, Asian slaw.” Unfortunately, the disappointment was palpable the moment we bit in. Maybe I’m a fool for expecting otherwise, but there’s no doubt in my mind that the shrimp were prepared from frozen. The breading was soft in parts and hard in others, and made no pretense of even attempting to stick to the outside of the shrimp. The “creamy, spicy sauce” covered half of the shrimp at best, and lacked any distinctive flavor, either spicy or sweet. Given that it’s seafood I didn’t mind the $12 price tag, but the app was a shocking disappointment. The one positive is that they do give you a fair amount of shrimp and it can definitely be shared. Instead of an entrée we opted for a “Shareable,” items designated on the menu specifically for two. We ordered the Dim Sum Basket ($15.99), not realizing that Pork Pot Stickers were included in this dish as well. As described by the menu, the Dim Sum Basket includes “Pork pot stickers, shrimp siu mai, cha su bao, and pork siu mai steamed on a banana leaf with soy lime dipping sauce.” If you’re not familiar with Dim Sum, it’s a popular style of Cantonese cuisine where you can choose from a variety of bite sized portions of food and is typically eaten for breakfast or early lunch. It’s a favorite of ours, though we tempered our expectation accordingly, given where we were dining. The basket comes with six pieces of what are essentially variations of a dumpling, and two steamed buns with a meat filling. Surprisingly, the steamed potstickers in the basket were much better than their pan seared siblings, and were much closer to the flavor profile we were expecting the first time around. The remainder of the dumplings (shrimp and pork siu mai) were disappointments, completely lacking in any flavor and almost not worth eating. My wife loves steamed buns so she was looking forward to the cha su bao, but even those were ruined by both a lack of substantial filling and overall blandness. Of the three items we ordered, we suspected we would be the most disappointed with the basket, but even these were a step lower than frozen grocery store counterparts we had enjoyed in the past.

At this point, we were so dejected in our meal that we had largely given up on ordering a dessert. The final nail in the coffin came when the gentleman at the table next to us took one bite out of his Fried Wonton dessert before putting it back down and walking out. Not exactly a ringing endorsement. After struggling to attract the attention of our waiter and presenting our Annual Pass, she later came back apologetically to let us know that our discount did not apply to the items we ordered. It turns out that the AP discount at Yak & Yeti specifically only applies to items listed under “Entrées” and nothing else. It was the perfect cherry on an incredibly disappointing cake.

Given its prime location in the park and top-notch theming, I was disappointed in just how poor the food at Yak & Yeti was. We’re savvy enough to know how to adjust our expectations when it comes to Asian food at the parks, but we expect a minimum level of quality that Yak & Yeti still managed to miss. Animal Kingdom doesn’t have a wide array of table-service to choose from, but this is definitely low on the list and I would much sooner choose most other quick service locations over this. For obvious reasons we never went back to try their quick service counterpart, but if you’re looking for Asian food on property, look to the far superior Morimoto Asia in Disney Springs or even the sushi at California Grill. Given what we had heard before visiting, I don’t expect our experience is the norm, and nothing is the bane of Disney dining more than inconsistency. I can only judge the restaurant based on our experience, however, and the only thing I would recommend at Yak & Yeti is a quick walk-through.