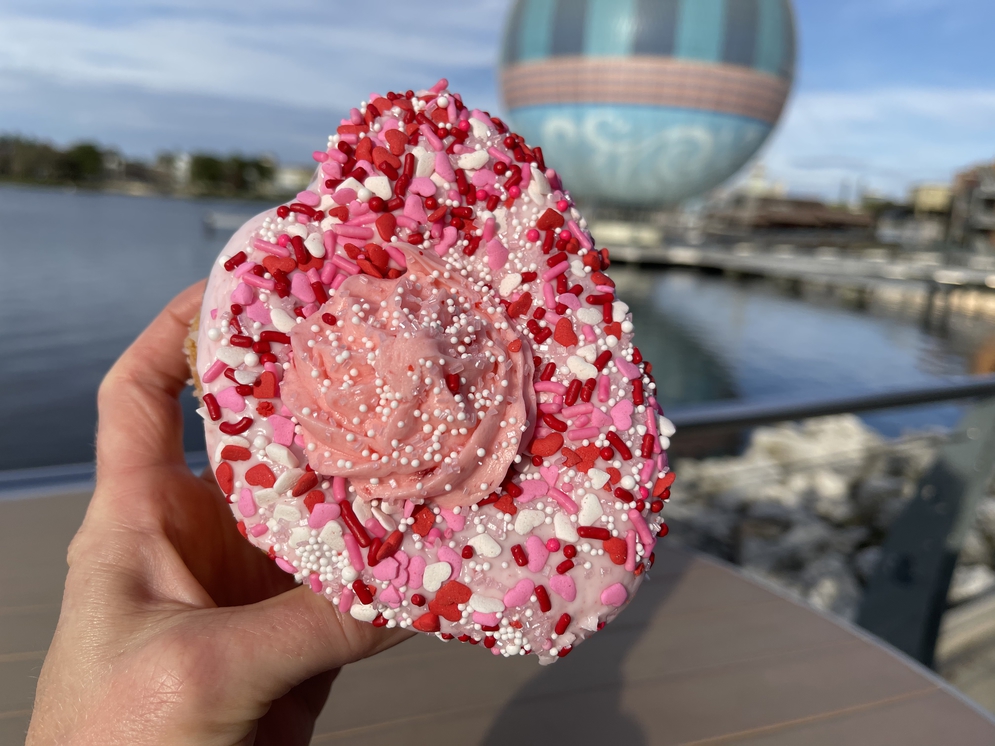 Just in case you're wondering if we're sick of donuts 'round here, let me assuage your fears; the love is still strong.

Last week, I had the chance to swing by Disney Springs and review Everglazed Donuts & Cold Brew's limited-time Thin Mint Cookie Donut. If you missed my article or my Disney Dining review of the Girl Scout collab donut, click here to catch up.

In honor of Valentine's Day, Everglazed has created a Sweet Heart Donut. The special treat is only available for this weekend and costs $5.50.

When I arrived at Everglazed, the virtual queue was being utilized. The wait was estimated to be an hour and a half, and I so placed my name on the list and found a quiet spot in which to get some work done. Thankfully, my wait was shorter than the estimated time, and I made my way back to the shop in Disney Springs' West Side.

When I added my name to the virtual queue, the Everglazed team member, Jenni, mentioned that she watches the DIS' YouTube videos and, when I said that I was there to review the donut, she said that she thought that they still had them. Limited-time donuts means they're only available if they're not sold out, so time was of the essence.

Long story short, when I came back to the shop, Jenni came to the rescue. The Sweet Heart Donut supplies were running low, so she had grabbed one for me. How kind is that?! Thank you, Jenni!

I must state that even though the donut was gifted, I will be fully honest about my review.

The base of this donut is one of Everglazed's colossal yeast donuts. Their yeast donuts are soft and pillowy, and they're really, really nice. And, as we've seen with the shop's other Funky Bunch donuts, the toppings are over the top.

The yeast donut is covered in strawberry icing, and then topped with strawberry buttercream and heart-shaped sprinkles. It's gorgeous to look at. This is the donut version of the heart-shaped eyes emoji.

As you cut into the donut, you can see that the dollop of strawberry buttercream extends into the middle. And if you like sprinkles, you're going to be a very happy camper with the amount with which the donut's been coated.

I found the strawberry icing to be nice, but I felt that the strawberry buttercream lacked strawberry flavor. Just like I felt with the Thin Mint Cookie Donut, I feel that the flavoring needed to pack more of a punch.

The overall taste of the donut is sugar rather than strawberry. I liked the crunch of the sprinkles, and it's gorgeous to look at, but it was just so incredibly sugary sweet.

Will today's donut prevent me from trying more of Everglazed's limited-time offerings? Nope. I'll keep trying (it's good to have determination, right?), and I'll keep hoping that the donut's featured flavor gets dialed up to 11.

Have you tried Everglazed's donuts? Which one is your favorite?

ps If you missed all of the donut chat on last week's DIS Unplugged, click here to give it a watch. 