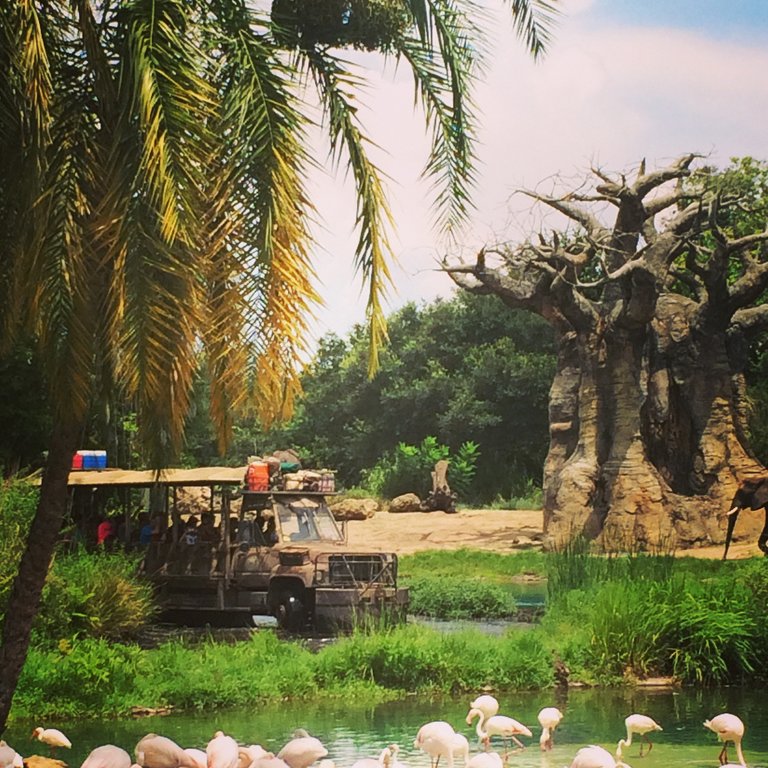 Entering the park you are in what is called the Oasis. Here you can find the Rainforest Café and a few animal sightings such as an Anteater or Spoonbill. The Oasis doesn’t offer a whole lot for the typical teen but it does have its fair share of details so be sure to look for them. Next we go into Discovery Island; the heart of Animal Kingdom. In Discovery Island you can find a lot to do. The park icon, the Tree of Life, is located right in the center and offers great opportunities for pictures. At the tree you will also find my favorite 3-D experience, which is It’s Tough to be a Bug inspired by the Disney Pixar film A Bug’s Life. Teens looking for a bite to eat will want to check out Pizzafari for  some quick service food and Creature Comforts for your Starbucks fix.

Continuing along to the left of the park we head into Africa. It is my favorite land, and it is sure to have some things for everyone including teens to do. Starting off with the Festival of the Lion King, an amazing show about the story of the Lion King. Festival of the Lion King is my favorite show on property. Kilimanjaro Safaris is one of the flagship attractions of the park. It has all types of animals including lions, elephants, and giraffes roam the African savanna. The safari is something you won’t want to miss so I recommend scheduling a Fastpass+. Moving onto food within Africa, there is a lot to choose from. One of the best character buffet meals in Walt Disney World is Donald’s Dining Safari at Tusker House. This buffet is a great choice for teens that want a lot of choices and those who want to see their favorite characters. In the brand new Harambe Market you can find Zuri’s Sweet Shop, which will curb the sweet tooth that many teens including myself have. Moving clockwise around the park we are taken to Asia, a hot spot for the thrill seeking teen. Kali River Rapids is a great raft ride on a hot day. Teens looking to get wet need to check this ride out. The granddaddy of the park is also located in Asia: Expedition Everest. This high-speed Himalayan train ride will take you backwards and down some drops as you try to avoid the Yeti. I highly recommend this attraction to all teens and it is popular so use a Fastpass+ here.

Finally, we are taken to DinoLand U.S.A which is more for the smaller kids but teens are destined to find a few things. My third Fastpass+ recommendation would be fore Dinosaur; a fun ride through prehistoric times to try and save a dinosaur. For teens that love spinning attractions head over to Primeval Whirl. Lastly, another great show is Finding Nemo: The Musical, a must do if you’ve never experienced it before.

Animal Kingdom is really a stunning park with all of its hidden details. Teens are sure to find thrills, great eats, and so much more in this one of a kind theme park.