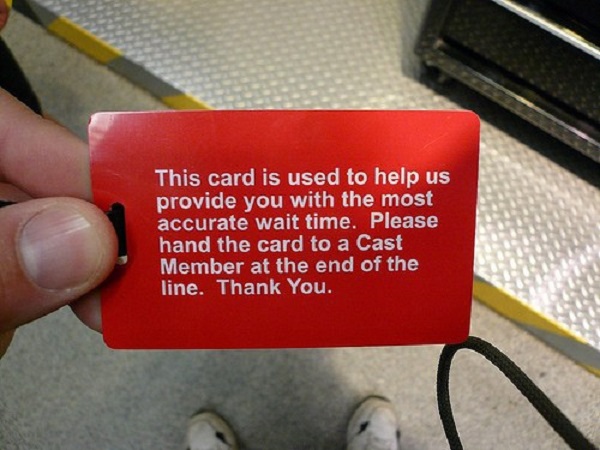 One of the “unwritten” must-dos at many Disney Parks is to get a “red card,” or as they are officially known as, FLIK Cards. According to an online story on the Inquisitr, writer Danny Cox says that these red cards will be a thing of the past.

These FLIK Cards – or “red cards” as guests call them – give Cast Members the sense of how long the standby wait time will be at any Disney attraction. At various times during the day, a Cast Member, at the entrance of each attraction, will scan a red card and randomly hand it to a guest. Once the guest walks through the queue, with the red card – attached to a black lanyard – they hand it to another Cast Member who scans the card. The system reads the card and calculates the current wait time for that attraction.

Written on the card: “This card is used to help provide you with the most accurate wait time. Please hand the card to a cast member at the end of the line. Thank you.”

No matter what the attraction is or how long the wait time is, guests were excited to be chosen to receive a red card. “Disney fans have taken this red card being handed to them as them being the ‘chosen ones,’” writes Cox.

Cox says there was talk the red cards would be going away for a weeks now. “A longtime cast member, with a Legacy name tag, advised that the cards are indeed being phased out and it is all because of the MagicBands.”

“Soon, the cards will be completely taken out of Disney theme parks,” wrote Cox. “As MagicBands will be used to measure the wait time from the start of a line to the end of it.

A Future World supervisor at Epcot and Guest Relations at the Magic Kingdom confirmed the red card phase out with Cox.

The supervisor at Epcot told Cox, “… (The) phasing out of the red cards is already taking place, but there is no set date for them to be gone entirely. It’s just a time-saving matter and the fact that technology has rendered the wait time cards as obsolete.”

Even though guests get excited to get one of these cards, most probably won’t notice they are gone. “While many attractions still have them, others have already done away with them,” says Cox. “Mission: Space at Epcot is already one of the rides that no longer uses them at all and they will soon be gone from Test Track, as well.”

We reached out to Disney for comment and a spokesperson said, “I’m asking around. I haven’t heard anything like that.”