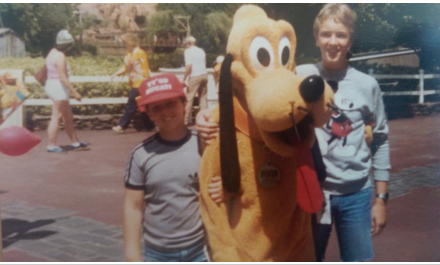 Firstly I would like to say a big hello, as this is my first blog post here. I of course am passionate about and obsessed with Disney, especially Walt Disney World Resort, and have visited many times over the last thirty plus years.

On that note, I still have very clear memories about my first visit all those years ago. It was 1980, and even though I only spent two days in the Magic Kingdom, as that was the only park to visit, something about the experience clearly resonated deeply with me, and now here we are in 2014, much the poorer for my obsession, but also much the richer for it in non-financial ways too.

It goes without saying that much has changed since that first time, with the Magic Kingdom now looking very different. This is ironic for a destination and brands that trade on memories, nostalgia and familiarity. I wouldn’t say that Disney has always managed change well over the years, as in my opinion, Stitch’s Great Escape will testify, but overall, I am still in love with the place despite the fact that so little of what drew me in initially has now gone to be replaced by new attractions. Those childhood memories (as I was a child in 1980 I promise) are so strong and treasured that Disney must walk a very thin line between keeping things fresh, new and engaging but also not ripping up and throwing away all that has made them so popular over the years.

Attractions such as 20,000 Leagues Under The Sea have long since moved to the great theme park in the sky, but I can remember as if it were yesterday climbing aboard that ride and loving every second. Similarly the Skyway cable car ride over Tomorrowland still plays in my mind like an HD movie with a ten year old me gazing down on the rooftops of the rides and crowds below. I don’t remember mourning the loss of these attractions in anything like the same way I remember enjoying them. Why is this? Well, in my case, I suspect I was always excited about what was coming next. Newer rides, mostly better experiences and better technology normally followed a closure and I embraced them (Stitch aside) trusting Disney to deliver the goods and to know what they are doing.

A side effect of my life long infatuation with the place is the same obsession now residing in my children, with my eldest daughter especially lapping up every morsel of Disney news like a thirsty dog in August. She is very similar to me in many ways when it comes to Disney, but one area in which we differ considerably is her resistance and unhappiness to change at her favourite place. It may be that the pace of change was slower all those years ago at WDW, and of course there wasn’t as much to change as there is now. Perhaps it may be a symptom of the seemingly endless list of changes, specifically at Hollywood Studios that has pushed Emily, my daughter, over the edge.

With every new announcement she groans a little more and questions why change must happen. She sees each attraction removal as another chip away at her childhood and the plans to remove the hat from Hollywood Studios was met with an angst ridden yelp and gnashing of teeth. “They are ruining my childhood memories” she cries staring at her phone which brings her almost all of her Disney news.

Whilst I will temporarily go all misty eyed at the thought of an old favourite being moved on, I am much more stoical about the whole thing. Maybe it’s an age thing? Having seen over thirty years of development and change deliver what is still the best holiday (vacation) experience on the planet, I am happy to assume that will continue, even if I don’t get the rationale behind every change (have I mentioned I don’t like Stitch’s Great Escape?).

Emily is less than convinced about Avatar Land, not understanding how one film a few years ago can justify such a huge change at the Animal Kingdom. I’ve already outlined her distress about the hat, and as for moving Star Wars in wholesale, again at the Studios she is one more change away from a sit in at Disney HQ.

I try to explain that Disney also have to keep an eye on the neighbours. With Universal rolling out huge Potter related changes, Disney can’t stand still. Whilst there will always be a diehard audience for a Disney trip, it is undeniable that WDW would ignore the competition at their peril. That is one of the benefits of these two recreation giants existing so closely. They keep each other fresh, competitive and ever changing which can only be a good thing for us, the paying public.

Emily declares to me that she needs to be an Imagineer, and steer Disney in the right direction. From large projects like Avatar Land to why Ariel always wears the wrong dress when out in the parks, she has a lot to input. Maybe that is proof in itself that Disney’s fans care, and care a lot. They feel invested in the brand, the experience and the future and hence keep going back, and back, and back.

Does Disney get the balance right between retaining the essence of what makes it special and keeping things fresh and new? Well, you’ll get a different answer from each fan you ask. For me, I trust them, love them and can’t wait to see what they do next. However, if Stitch isn’t gone soon I’m going to stage a protest through Tomorrowland!

Till the next time….. 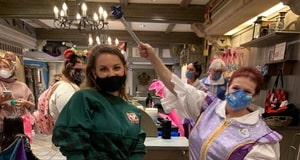