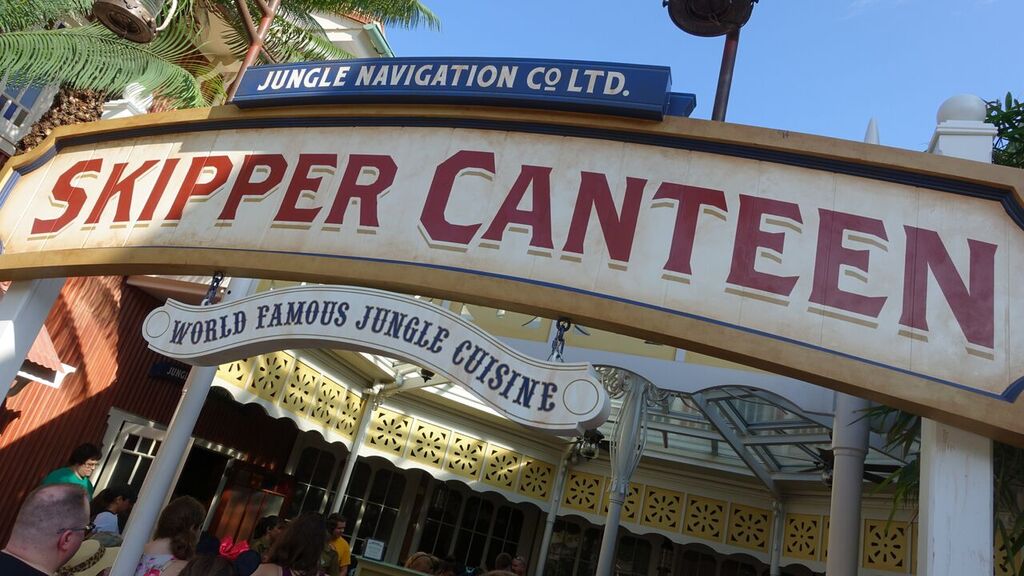 The anticipation and excitement around the Skipper Canteen, the newest table service restaurant at the Magic Kingdom, was palpable.  For months before the restaurant’s opening, fans waited and wondered about every aspect of the restaurant – from food to décor to experience.  After all, being tied directly with one of Disney’s most iconic attractions (Jungle Cruise) is going to garner some attention.  The response from fans after the restaurant opened has ranged from muted disinterest to disdain. There are two areas where this restaurant is breaking new ground for Disney.  The first is in Advanced Dining Reservations (ADRs) – or more specifically, the fact that you can’t make one for this location.  Disney is conducting a test with Skipper Canteen – you can’t make reservations, you need to walk up to the podium when you’re ready to eat.

The second area that’s a departure for Disney is in the menu.  No burgers and fries on hand here – instead, you have a menu inspired by the geographic regions represented in the Jungle Cruise attraction (Africa, South America and Asia).  Dishes such as Char Siu pork, House made Arepas, and Hot and Sour Soup are among the offerings – and they’re good.  In fact, I find them to be VERY good. However, this restaurant has a problem – namely, people aren’t eating there.  While some speculate that it’s a function of not accepting ADRs, others feel it’s the menu that is scaring people away.  I think it’s a combination of both.  Disney is under constant criticism over the difficulty in obtaining reservations for the ‘must have’ restaurant of the moment (Be our Guest anyone?), yet they are also fielding massive complaints over the entire My Disney Experience roll-out, with many lamenting that they have to plan everything 6 months in advance.  Disney is in a no-win situation with that – people want an existential experience; they just want to be able to plan every aspect of it.

The food is the other culprit here – and on this point, I understand.  Americans (generally speaking) are not known for their adventurous palates when it comes to food.  We pretty much invented the concept of comfort food, and we like what we know.  This is especially true when it comes to theme parks and food offerings.  Even in Epcot, where culinary experiences from around the world take center stage, the menus have been ‘toned down’ in order to appeal to a broader market.   One suggestion I’ve heard was that Skipper Canteen should do something similar to what Disney Cruise Line does with its menu.  They offer menus representing different styles, but also have ‘stand-by favorites’ available for those who don’t find anything they like.

Either way, I expect that before long we’ll see some changes to this restaurant – either with the opening of ADRs or an expansion of the menu.  What I hope Disney doesn’t do is dumb down this menu to appeal to the lowest common denominator.  They could also possibly rename the items on the menu – instead of falafel, we could call it “Tasty Rice Balls”, instead of Sea Shu Mai, they could call it “Fishy Dumplings” – Char Siu Pork could become “BBQ Pork (Chinese style)”  (Of course, I’m being sarcastic here – just in case anyone thinks I’m being serious).  However, a ‘rebranding’ of the food items (same dish, different names) might entice otherwise skeptical guests to give it a try.  So far, I’ve eaten at this location twice and loved my meal both times.  You have a real chef cooking food here – someone who seems to know what he/she is doing and has brought a real air of fun and creativity to the menu.  Let’s encourage more of that, rather than ranting for a cheeseburger as we scrape our knuckles on the ground.