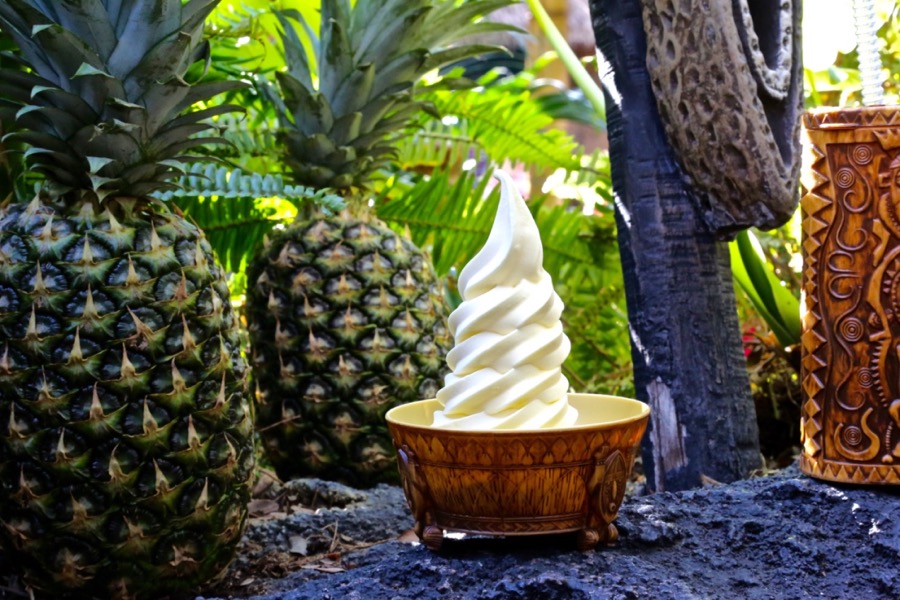 ShareTweetSubscribe
The Pineapple Dole Whip is one of the most popular food/beverage items at Walt Disney World. Dole Whip is light and creamy, sweet, nondairy frozen pineapple treat. Once only sold at Aloha Isle in Adventureland at Magic Kingdom, this beloved frozen treat can now be found all over property and in other parts of the world. This includes Tiki Juice Bar in Disneyland, Tamu Tamu Refreshments in Disney's Animal Kingdom, Pineapple Lanai at Disney's Polynesian Village Resort, Marketplace Snacks at Disney Springs, Aulani, the Dole Plantation in Hawaii, as well as at the Epcot Flower & Garden and Food & Wine Festival. Dole Whip is dominating the frozen dessert market at Walt Disney World, even rivaling the iconic Mickey shaped ice cream bar. Dole Whip has cast such a large shadow over its dessert friends that the Citrus Swirl now appears to be underrated and underappreciated. Returning to Sunshine Tree Terrace in Magic Kingdom’s Adventureland in 2012 after a mysterious hiatus, the Citrus Swirl is a frozen desert, twisted of frozen orange juice and vanilla soft serve. It is a contrast of flavor profiles, tartness from the orange slush, accompanied by the silky sweetness of the vanilla soft serve. The first time I had a Citrus Swirl, it immediately reminded me of having a creamsicle, one of my all time favorite frozen treats. The most unique part about this frozen treat surprisingly enough is not its flavor; it’s the fact that it was promoted early on around an Orange Bird, a cartoon character formed for promotional purposes between the Walt Disney Company and the Florida Citrus Commission (FCC). In 1969 the two companies agreed to a contract that said the FCC would sponsor the Sunshine Pavillion (currently the Enchanted Tiki Room) along with Sunshine Tree Terrace, the neighboring quick service food and beverage stand. Outside sponsorships were quite common during Walt Disney World’s early years in order to help pay for park expenses. The Orange Bird was a major icon during Magic Kingdom’s early years. Like other partnerships at Walt Disney World, the FCC decided not to renew its partnership with Disney in 1986, therefore the Orange Bird vanished from Magic Kingdom until its comeback story to Walt Disney World in 2009. If the Orange Bird never disappeared from Magic Kingdom and it sponsored Citrus Swirl since Magic Kingdom’s opening in 1971, do you believe a popular commodity like the Orange Bird would have over shadowed the characterless Dole Whip? The Citrus Swirl has a following; otherwise, they probably wouldn’t have brought it back. It’s not nearly the pandemonium that is Dole Whip though. Why is that?
Maybe Citrus Swirl doesn’t hit the notes of Dole Whip because of its use of frozen orange juice?
Americans just aren’t indulging in orange juice as they once did. According to Erin Brodwin of Business Insider, orange juice, nutritionally speaking, "isn’t much better for you than a glass of soda or any other sweetened beverage." From 2012-2016 Orange Juice Sales were down a whopping 13%. To further that sentiment, frozen orange juice (half of the Citrus Swirl) sales have fallen 39% in that four-year span. According to The Wall Street Journal, "Florida once had more than four dozen processing plants but now only has seven." Is the decline of Orange Juice playing a contributing factor into Citrus Swirl’s popularity? Maybe it’s the fact that Pineapple Dole Whip is dairy free, appealing to a larger target market than Citrus Swirl that has dairy in its soft serve vanilla. Maybe Citrus Swirl’s flavor profile is just misunderstood. As I mentioned earlier, the orange juice portion of the frozen treat has a tartness to it that not everyone’s taste buds appreciate, especially when compared to the easy to eat creamy Dole Whip texture. However, Citrus Swirl is not intended to have all the frozen orange juice consumed and then all of the vanilla or vice versa. It’s a classic twist treat, meaning both flavors are supposed to coincide with one another. Pairing the orange and vanilla in a single bite or lick creates a perfect contrast of flavors working together. The story of the Orange Bird and flavor makes the Citrus Swirl special. What makes Citrus Swirl truly a wonder of Walt Disney World though is its scarcity. You can find Dole Whip, Mickey ice cream bars, churros, turkey legs, Mickey pretzels etc all over Walt Disney World and in other parts of the world; but Citrus Swirl can only be found at Sunshine Tree Terrace, in Adventureland, in Magic Kingdom. Being able to experience a Citrus Swirl at just one place in the world makes it unique, makes it a true Disney experience. Have you tried a Citrus Swirl? What did you think? Leave a comment below!
ShareTweetSubscribe