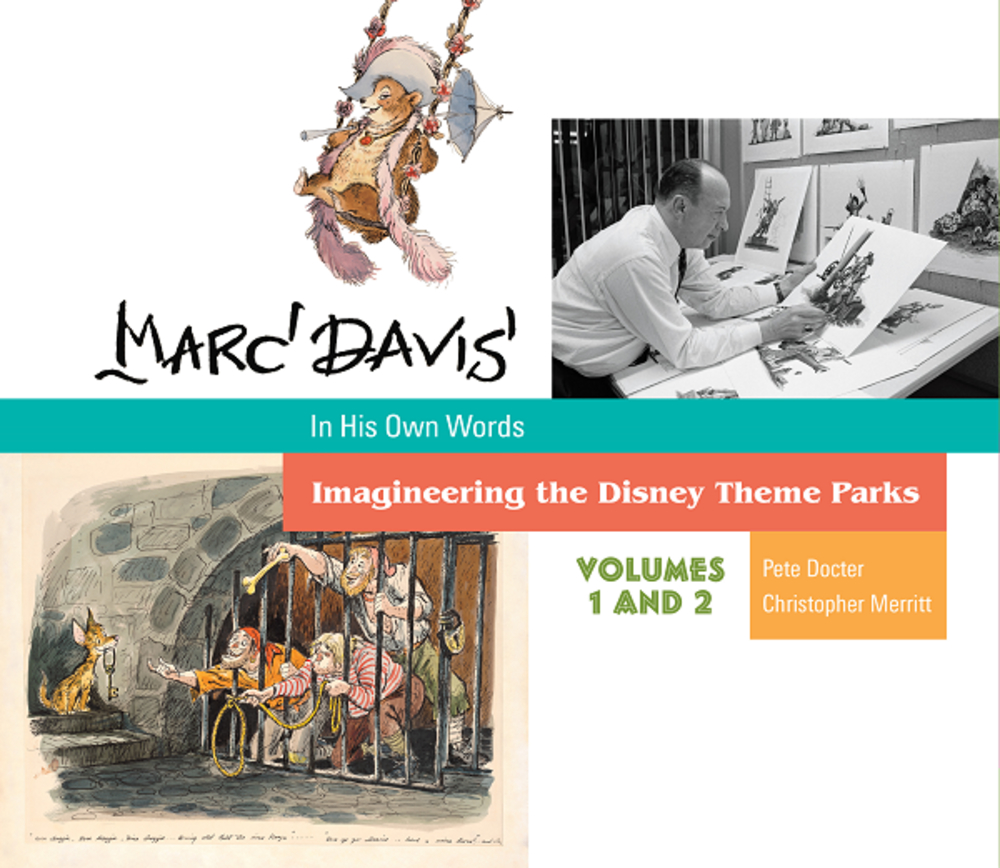 ShareTweetSubscribe
"Marc can do anything I ask,” said Walt Disney. “He can do story, he can develop characters, he can animate, he can design these rides. I have a whole building over there filled with animators, but I have only one Renaissance man, and that’s Marc.” Marc Davis truly was a Renaissance man. And, if there was any doubt or question about it, the latest book from Disney Editions will answer any remaining questions. Marc Davis in His Own Words: Imagineering the Disney Theme Parks is a two-volume set chocked full of stories, photos, drawings, and interviews about this amazing Disney Imagineer and Disney Legend. Oh, did I mention it also weighs 11 pounds?! Why is Davis the quintessential Renaissance man? Well, not only did Davis create some of Disney’s most recognizable animated characters, but he is also responsible for some of the most popular attraction characters in Disney parks. He started drawing when he was a child, mostly so the bullies at his school wouldn’t beat him up. At 22 years old, Davis started his career with The Walt Disney Company as an assistant animator on Snow White and the Seven Dwarfs. He animated many iconic characters, but he specialized in females. Because of this, around the studio, he was known as the “ladies man.” Some of his beloved characters include Cinderella, Alice in Wonderland, Tinker Bell, Aurora, Maleficent, and Cruella de Vil. Walt Disney was not happy with one of the earliest Disneyland attractions, “Rainbow Caverns Mine Train,” which opened in mid-1956. In 1959, he asked Davis to go to Disneyland and take a good, long, and critical look at the attraction and report back his thoughts and ideas. According to the authors, “Marc Davis’s initial work for Disneyland involved mainly improving (or ‘plussing’) attractions that had already been installed but that Walt wasn’t fully content with for various reasons.” Thus began the next chapter in Davis’s career … Imagineer. For the remainder of his career, Davis either “plussed” or created original characters for some of the Disney parks' most enduring and beloved attractions including Jungle Cruise, Pirates of the Caribbean, The Carousel of Progress, Walt Disney's Enchanted Tiki Room, The Haunted Mansion, Country Bear Jamboree, and more. 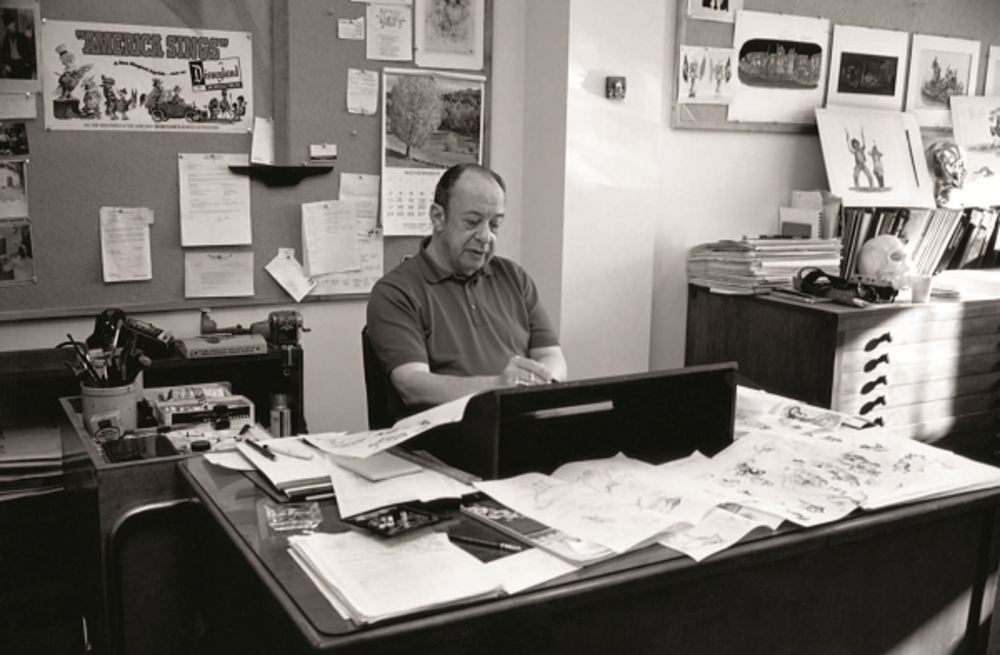 Volume 1 of Marc Davis in His Own Words: Imagineering the Disney Theme Parks covers the start of Davis’s career to the 1964-65 New York World’s Fair and though the beginnings of his Imagineering career. Volume 2 continues with Davis’s contributions to attractions at Disney parks worldwide through his retirement and death. Merritt and Docter have done an amazing job compiling drawings, photos, and interviews for this book. According to press notes, these books “includes more than 1,500 pieces from the Imagineering archives, the vast majority of which have never been published.” Chris Merritt says the inspiration for them putting this book together was because Marc Davis is arguably one of the most significant artists to ever design theme park attractions for Walt Disney Imagineering (known as WED Enterprises in the 1960s and 70s). "His designs used in classic Disneyland attractions such as the Jungle Cruise, it’s a Small World, Haunted Mansion, Pirates of the Caribbean, Country Bear Jamboree, Walt Disney’s Enchanted Tiki Room, and many others that are so iconic," said Merritt. "His background as a master animator during Disney’s golden age of animation really served him well in terms of how to stage and design characters and environments – a rare skill set that he brought to Imagineering when Walt Disney asked him to start to “take a look” at Disneyland attractions in the early 1960s. Pete and I really wanted to get this out through our book by showcasing all the amazing artwork and rare photos we were able to dig up during our research process." 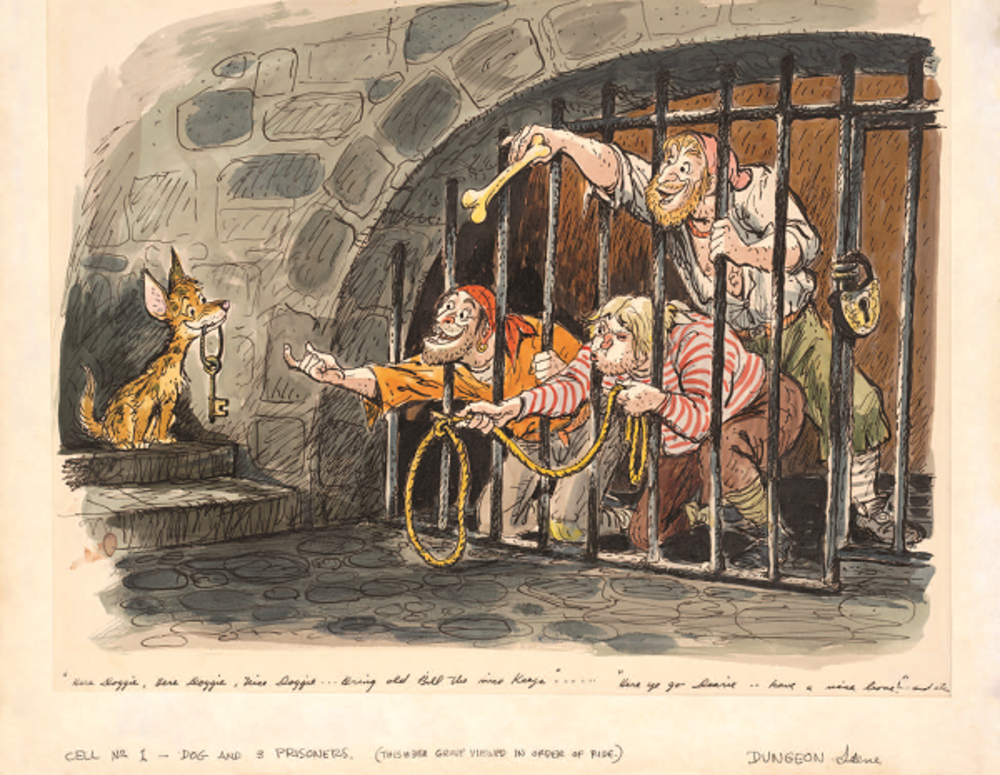 These two volumes come across more like a documentary film. A protégé of Davis, Merritt sat down with Davis in the 1990s and interviewed him about his career. Many of those hundreds of hours of interview are included in this book. Alice Davis, Marc’s wife, gave Merritt and Docter access to thousands of documents, drawings, and photographs in their home. The Walt Disney Archives did the same. There are also quotes about Davis from many other Disney Imagineers including Rolly Crump, Mary Blair, Blaine Gibson, Claude Coats, Bob Gurr, and even from the man himself … Walt Disney. But what makes this book like no other book about Disney are the hundreds of photographs and drawings, sketches, and painting detailing every little aspect of many of the attractions. The authors even included never-realized characters and attractions that Davis worked on. "I first met Marc and Alice Davis in 1990, when I sent a letter to him asking if I could interview him for a student paper I was writing for a class in Art History I was taking, while simultaneously working as a Jungle Cruise skipper at Disneyland," said Merritt. "To my surprise, not only did he say yes, but he also invited me up to his house to spend the day with him and his equally talented wife Alice. Their house was a revelation of original artwork, memorabilia and artifacts from their world travels. At age 20, it was a bit of a gob smacking experience for me! Beyond my student paper, my long term plans weren’t to do this book. But after my first visit I kept in touch and they became mentors to me. While attending classes at CalArts, it was fairly easy for me to drive down and have lunch with them and pepper them with questions about their work on classic Disneyland attractions, and I started tape recording these conversations. Many other historians were also doing this, so combining what I recorded along with recordings done by others, and transcribing his lectures and other speaking engagements, gave Pete and I a wealth of his words to choose from. We really wanted to put this book in his voice, and give the reader a similar experience to what Pete and I had when we were lucky enough to visit with them in our 20s. Our hope is that the reader feels like they are getting a personal lecture from him, explaining his design theories and sharing stories about working directly with Walt Disney on Disneyland." Merritt started working on gathering materials for the book while he was still on assignment in China, working on Shanghai Disneyland back in 2014. "I was communicating with Alice Davis occasionally and told her about this idea I had, and she very sweetly said, “Oh my yes – Marc would be so pleased!” (Marc passed away in January of 2000.) The challenges were many – not the least of which was transcribing all the interviews I could get my hands on, and putting them in some semblance of order that made sense. Then the hunt for rare and previously unseen images was important to me as well, and that definitely was a challenge. Between scouring the collections at the Walt Disney Imagineering Archives, the Walt Disney Archives and Photo Collection at the Studio, contacting photographers who took photos at WED Enterprises in the 1960s, private collectors and all the items Marc and Alice saved at their home – well, it was daunting to say the least! We even found a treasure trove of photographs at the Library of Congress that (to me anyway) are jaw dropping – they show Walt Disney, Marc Davis and his core team of Imagineers not posing for the camera – but actually hard at work creating the attractions millions of guests are still enjoying today." Of all the material that Merritt and Docter combed through, Merritt said what surprised him the most was that the fact that he did design work for Disneyland's opening year (the Golden Horseshoe). "I’d always thought he didn’t start on Imagineering projects until his work on Nature’s Wonderland and the Jungle Cruise in the early 1960s."

Merritt said it took about five years to research and write this book. He said the first two years were just getting organized, hunting for rare images/photos and transcribing old interviews and lectures Marc gave. "It was a ridiculous amount of work – mostly done on lunch breaks, bus rides in China and train rides in Southern California!" One of their favorite discoveries was The “Squeaky Door Ghost!" "This was a ghost gag designed for Florida’s Haunted Mansion, that I always assumed never got further than Marc’s drawing table," said Merritt. "It turns out they made a full-sized mock-up of her (we found photos), which I’d never heard of prior to this project. She’s certainly not in any of the show set drawings or on the production schedule – so it really is a mystery as to what happened there." Cory Doctorow writes in BoingBoing.net, “His latest book, Marc Davis in His Own Words: Imagineering the Disney Theme Parks, is his magnum opus: a gorgeous, two-volume, slip-cased set on the life, philosophy, reminisces, career, and designs of Marc Davis …” Although Docter and Merritt never worked with Marc per se, Merritt says, "He was more of an unofficial mentor and friend to me – I think Pete would say the same. I certainly did try to learn as much as I could from him when I was visiting throughout the 1990s." Merritt says that this may be hard to believe, but they got about 95% of what they wanted in the book. "You certainly can’t print everything he ever did – that would have made this a 3-volume book that would likely make you fall over from the weight! I really credit Wendy Lefkon of Disney Editions for getting behind this project and making it as big as it is. I couldn’t be happier with it – it feels like Marc finally got the book he always deserved about his Imagineering years. The combination of Marc’s words and the incredible concept art is pretty powerful to see all together in one place." Merritt said he was able to sit with Alice and show her the two volumes about 9 months ago. "It was just the best," said Merritt. "She held my hand as I swiped through the book on my iPad and said, 'Oh, my love!' whenever a photo of Marc would show up." Like visiting a Disney park, there is so much information contained in these books that it is easy to re-read these books over and over again and still learn something new each time. These books are really a treasure-trove for Disney fans, as well as anyone who has ever visited a Disney park. I asked Merritt if he and/or Docter have any plans to write another book - in this manner - on other Imagineers. And he said, "I do! Put your votes in now!" Marc Davis in His Own Words Imagineering the Disney Theme Parks By Pete Docter and Christopher Merritt Pages: Volume 1 – 367 & Volume 2 – 367 . Disney Editions. $150.00
ShareTweetSubscribe