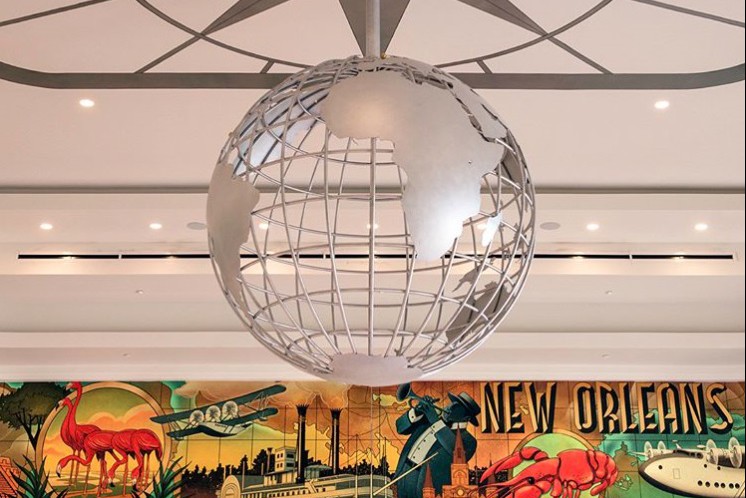 On Wednesday, December 13, 2017, I had the opportunity to get a sneak peek of Maria & Enzo’s, Enzo’s Hideaway, and The Edison. Our tour guide gave our group a better understanding of the theming and storyline of these new dining locations coming to Disney Springs!

As the story goes, Maria & Enzo owned and operated a bakery at the Disney Springs air terminal. Eventually, the air terminal was shut down in the middle of the golden age of travel, so Maria & Enzo decided to buy the old terminal to open their dream Italian restaurant, and their old bakery was converted into Pizza Ponte, a quick service pizza location.

The details of the menu haven’t been released, however, we were told that it will be a light southern Italian style cuisine, similar to Tutto Italia Ristorante, but with its own unique style. Chef Theo Schoenegger is the head chef, but won’t be in-house every night similar to Chef Masaharu Morimoto.

The restaurant is casual-elegant. Meaning you can wear theme park clothing, but guests might feel uncomfortable wearing baseball caps and sandals.

Maria & Enzo’s restaurant is massive, filling the entire space of what was the massive lobby, boarding, and ticketing area of the air terminal. The lobby is wrapped with an impressive art deco mural! This restaurant can and will be used for special events like wine tastings and other exciting offerings.

Tucked away underneath Maria & Enzo’s is Enzo’s Hideaway, a bar with a speakeasy atmosphere. This will be the epicenter of signature cocktails at Disney Springs. As the story goes, these steam tunnels predate the terminal above and were eventually used to store alcohol during the prohibition. When Maria & Enzo bought the terminal they had no idea the tunnels existed but when they found them, Enzo used them as a communal place where he, his family, and friends could all enjoy a meal together! This tradition is still kept up as the dining location will offer weekly Sunday suppers where guests can bring their own bottle of wine for free (no cork charge). Once a month, this location will also host the Smuggler’s Series for upscale cocktails and much more! This restaurant will feature a Roman cuisine. The walls are adorned with Graffiti from the years of speakeasy workers making their mark.

We ended the day at The Edison, the historic power plant of Disney Springs that has been converted into a restaurant, bar, and nightclub! As guests enter The Edison, they will be greeted with a massive clock tower, and further into the restaurant, guests will find several industrial antiques, hand-picked by The Edison developer, Andrew Meieran. The Edison has several bars that will each serve their own signature drinks. These locations will be a restaurant in the day. At 10 p.m., the restaurant will be converted to a nightclub atmosphere with only guests 21 and over allowed inside. There will be a cover charge past 10 p.m., but the cost of the cover charge hasn’t been released at this time. The nightclub will have a simple dress code with guests expected to not be in baseball caps and sandals. The Edison will offer daily entertainment including musicians and even aerial performers.