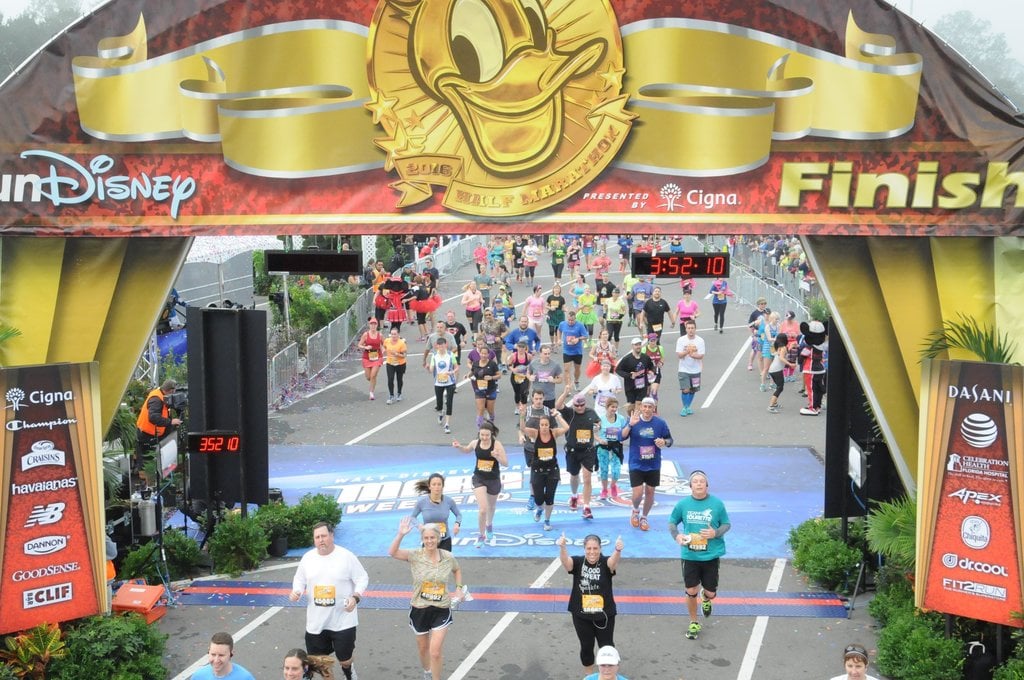 ShareTweetSubscribe
Even though I don't consider myself a "runner," I often say that every ten years I run a half marathon.  And of course I would only run this kind of race at my favorite place on earth: Walt Disney World.  The Walt Disney World Marathon Weekend, held every year in January, consists of several different races over the course of a few days, including a 5k, 10k, Half Marathon and a Full Marathon. I have run the Half Marathon (13.1 miles) twice, completing it first in 2006, and then again in 2016. I have noticed quite a few changes in the race that occurred during that 10-year span. Participants According to official race results, there were 11,786 finishers in the 2006 Disney World Half Marathon and 21,506 finishers in 2016. That's an 82% increase, almost an additional 10,000 finishers! Even before I looked up the race results,  the 2016 race definitely felt more crowded, with a seemingly endless stream of people ahead of me and behind me in the race. One of my favorite parts of the race is running through Cinderella Castle, and in 2006 I remember sprinting through the castle during the race.  But in 2016, the race was so crowded that it took almost five minutes just to get through the castle walkway. Race Sign-up For the 2006 race, I signed up to run the race in August 2005, just five months in advance of the January 2006 race day. When it was time to sign up for the 2016 race, it was much more popular.  I had heard that the 2015 race sold out within 24 hours. So, I took advantage of the early registration for Annual Pass/DVC members and signed up as soon as registration opened on April 14th, 2015 (9 months out). When general registration opened on April 28th, the Half Marathon, 10k and 5k sold out that same day!   However, I noticed that the full marathon is a bit easier to get into, with slots still available for the 2017 race last I checked (Aug '16). Corral Placement When running a popular race like the Disney World Half Marathon, runners are placed into "corrals" so that the start times can be staggered. Usually the corral placement is assigned based on the runner's stated pace and/or the order in which the runner signed up to race. When I signed up for the 2006 race, I was able to self-select my running pace which put me in corral "F" (6th from the start).   However, for 2016, Disney required a recent "proof of time" in order to be placed in any of the upfront corrals. Since this was only my 2nd half marathon and it had been ten years since my last one, I had to take whatever corral they gave me. So even though I planned and trained to run the whole race, I was assigned to corral "N" (14th from the start) and was mixed in with those who planned and trained to walk the race. Race Experience The race starts at 5:30 a.m, and participants need to be at the start line well before the race starts.  In 2006 it happened to be about 30 degrees that morning, so it was quite difficult to stand around waiting for the race to start. But for 2016, I heard that Disney was offering a "Race Retreat" before the race for an additional charge. It was a climate controlled tent by the start line, with a hot breakfast, beverages, and a place to stretch.  Remembering the misery of standing outside for 2 hours in the freezing cold years before, I jumped at the chance to purchase this add-on. Meet-and-Greets/Photo Ops In 2006, there were some characters at the start and the finish of the race, but I do not recall there being very many character meet-and-greets along the race course. I did stop from time-to-time to get my picture by the mile-marker signs (which went from being banner-style in 2006 to backlit signs by 2016). However, in 2016 there were a lot of meet-and-greet opportunities during the race, including rare characters like Scrooge McDuck. I saw him less than half a mile from the finish line and even though I really wanted to finish the race under three hours, I just had to stop. I'm so glad I did, even though my official finish time wound up being 3:01:38 (so close). The Goofy Challenge and the Dopey Challenge Back in 2006, I had learned that participants could participate in the "Goofy Challenge." This involves running the Half Marathon on one day and then the Full Marathon the next day (total of 39.3 miles over 2 days). I thought that was the craziest thing I had ever heard, but it was incredibly popular.  In fact, it was so popular that by 2016 Disney had added the "Dopey Challenge."This consists of running four races over the course of four days: 5k, 10k Half Marathon, and Full Marathon - that's 48.6 miles! One of the big lures for running all these races are the medals that the finishers receive. A "Dopey" finisher will get six medals: one for each race, one for completing the "Goofy Challenge" and one for completing the "Dopey Challenge." I love my medals, but have never been tempted to add any more to my collection in any given year. Extras In general, there were more "extras" offered in 2016 vs. 2006 and I already mentioned the "Race Retreat." Another extra that I purchased was the "Pasta in the Park Party". This was a special event held in Epcot the day before the race. The price gave admission to Epcot in the evening, plus a pasta dinner, with access to special character meet and greets, like Lotso, the bear from Toy Story. Final Thoughts Overall, I enjoyed running the race in both the years that I did it. I admit the crowd level in 2016 was a bit frustrating, especially as I was really trying to get through the crowds so I could complete it in less than three hours.  But I know that if I was a serious runner, I could have submitted a proof of time and gotten a better corral. I also enjoyed the extras that were available for this race: I would definitely do the "Race Retreat" again, but not the "Pasta in the Park Party." All in all, Walt Disney World Marathon Weekend is an awesome experience, and I'm looking forward to running my 3rd Disney 1/2 Marathon in 2026! Have you noticed any differences in the Run Disney races over the years?  Do you think the differences have been for "better" or "worse"?
ShareTweetSubscribe