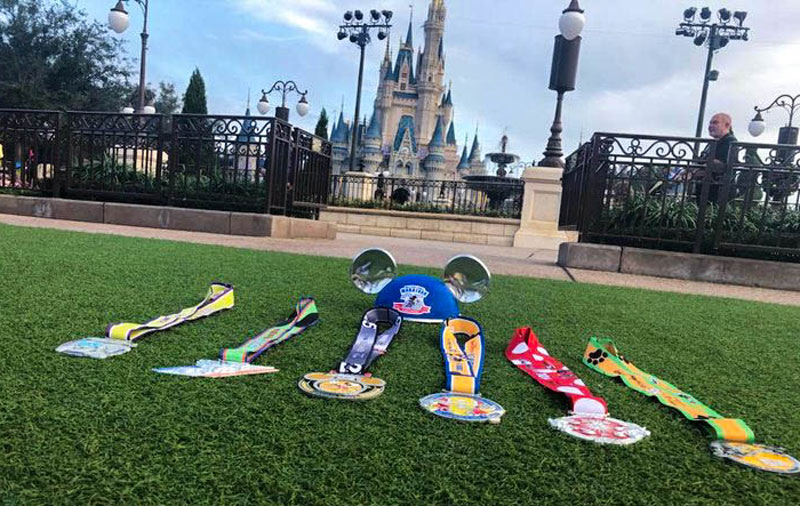 ShareTweetSubscribe
Over 25,000 runners descended upon the Epcot parking lot on the morning of January 7th, 2018. The 25th running of the Walt Disney World Marathon was met with huge excitement, and roughly 20,050 finishers crossed the finish line and earned themselves a unique 25th anniversary medal to commemorate the event. The Walt Disney World Marathon Weekend events kicked off on Wednesday, January 3rd, 2018 with the runDisney Health and Fitness Expo at the ESPN Wide World of Sports. People flocked to the expo to pick up their race bibs and get their hands on commemorative weekend merchandise. This created up to two-hour waits just to get in to look at the merchandise. The expo ran from January 3rd to the 6th. Thursday, January 4th was the Walt Disney World 5K, which has changed over the 25 years in many ways, however, it remains the more family-focused event of the weekend. The course starts in the Epcot parking lot and enters backstage before turning into World Showcase, where runners run around the lagoon with music playing and the torches lit. Friday, January 5th was the 5th annual Walt Disney World 10K. This course starts in the parking lot again and goes out the Epcot entrance before turning back towards Epcot and again into World Showcase. The course also runs past the Epcot area resorts before finishing back out in the parking lot, where runners earned a Minnie Mouse-themed medal. This year, both the 5K and 10K were some of the coldest over their respective histories. Saturday, January 6th was the 21st running of the Walt Disney World Half Marathon. Many runners looked forward to this event, as the 2017 half was cancelled. This course begins at Epcot and runs through the Magic Kingdom and back into Epcot. The ever rare Ear Force One Mickey hot air balloon even made an appearance on course. Donald Duck is the theme of the half marathon. Finally, Sunday, January 7th was the big day — the 25th running of the Walt Disney World Marathon. 20,000 plus runners set out to take on 26.2 miles through all four Walt Disney World theme parks and the ESPN Wide World of Sports. Characters such as the Evil Queen, Sebastian, the Up characters, Hades, Adventurers Club, old ride vehicles, and more were spread throughout the course. One of the big highlights of the marathon is the opportunity to ride attractions during the race. The park must be open when passing through though. Many runners stop and ride Expedition Everest, for example, which is at roughly the halfway point of the marathon. Other runners will try to ride Rock 'n' Roller Coaster or Tower of Terror when passing through Hollywood Studios. This year, the mile marker for mile 25 was a photo stop for runners to have a chance with a large banner showing 2018's medal and logo. Running through to the finish, runners were awarded the large Mickey Mouse-themed medal with a spinning feature that included the quote, "If you can dream it, you can do it!" Finishers were also surprised with commemorative Mickey ears in celebration of the anniversary. Many runners, including myself, went to get the ears embroidered in the parks after the race. The conclusion of the marathon also meant the conclusion of the two challenges that many participants take on. The Goofy Race and a Half Challenge is when runners complete both the half and the full marathons back to back. The Dopey Challenge has runners complete all four races of the weekend. This was also the 5th anniversary of the Dopey Challenge and many people earned "perfect" status, which means they have run every single challenge to date. This accomplishment earns you a special set of bibs and a special finisher's ribbon for your medal. The marathon had 76 perfect marathoners who had completed every single Walt Disney World Marathon. runDisney held a special dinner for these runners over the weekend and all 76 perfects were awarded marathon registration for life. As long as they keep running they can run the Walt Disney World Marathon for free! Nick Hilton surprised everyone by winning the 25th Walt Disney World Marathon, the first American to do so since 2004. Fredison Costa was the favorite going in, after winning the last four marathons in a row. Unfortunately, he did not finish the race due to illness. Brazilian Giovanni Martins won on the women's side. The Walt Disney World Marathon and related events remain some of the best races in the country, and it was a pleasure to participate in the 25th anniversary of the marathon and the 5th anniversary of the Dopey Challenge. I hope everyone who wishes gets to experience these races when they can. To learn about these races and more, join in the discussion on the runDisney board on Disboards.com and read my article on the history of this race event.
ShareTweetSubscribe