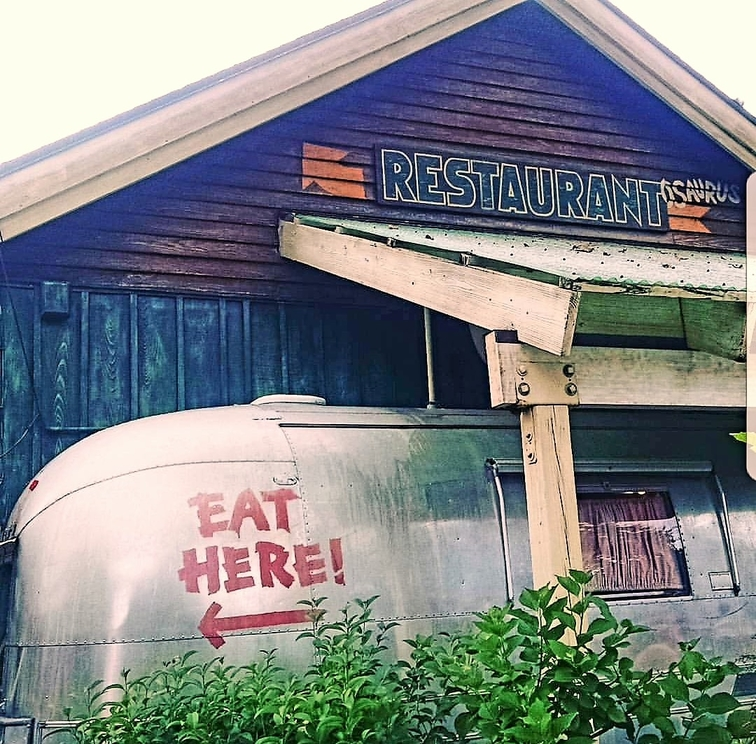 Theming is how Walt Disney World separates itself from the competition. It is an integral part of connecting guests to a story that an everyday amusement park back home maybe cannot.

This is not about the food at each restaurant, as I know taste buds differ vastly from person to person.

These are the quick-service restaurants at Walt Disney World that, in my opinion, provide the most cohesive storytelling to the guest. The restaurant is broken down into the Automotive and Stunt sections, Machine Shop, Paint and Plastic Departments, Scenic Department and Studio Shops. In the Paint Department, there are two paint cans, catsup red and mustard yellow, to give a cohesive theming between food and warehouse. Take notice of the tables and chairs used in the dining rooms. They’re not mismatched by mistake, this is a warehouse after all, they use what they have available to them.

There are Stunt and Paint Department offices to look into which gives the appearance of this being an active movie warehouse. Props from past attractions can be found here, including a hovercraft part that was used at Horizons (1983-1999) in Epcot. There are murals that would be used for backgrounds in movies, auto parts, tools, plaster castings and much more. With so much to look at, despite it being a restaurant, you really do feel like you are in an operating movie warehouse; and that’s the point of theming, to take you to another place.

Be Our Guest Restaurant – Magic Kingdom Be Our Guest Restaurant appears to be the most popular full-service restaurant since its opening in 2012 as part of the new Fantasyland expansion.

It’s stayed so popular that you better make advanced dining reservations 180 days out or you may find yourself constantly looking for availability up until your visit.

There’s good news if you miss out on a dinner reservation; this restaurant acts as a quick-service location during the morning/afternoon. Although still busy, there is an alternative route for you and your family to experience the inside of Beast’s Castle.

Straight out of the movie, you have the chance to eat in either the Ballroom, the Rose Gallery or the West Wing. Even if you are just there for lunch, you’ll still be dished up on china dishware, suggesting that you are still dining in a castle, no matter the occasion. Considering you are eating inside the Beast’s Castle, from one of the most beloved Disney movies of all time, it would have to be considered one of the best theming options within quick-service dining. Columbia Harbour House opened its doors in 1972 in Magic Kingdom. Based on where the building sits, it lies in both Fantasyland and Liberty Square. The theming of the restaurant is to a New England waterfront during colonial times. From the first sight of the restaurant, theming is evident in even the smallest of details. “Harbour” in Columbia Harbour House is spelled with a “u”, which would have been the correct spelling of that time period due to British influence. The restaurant is comprised of twelve individual dining rooms which includes the second story (one of the quietest places to eat in Magic Kingdom.)

Each room is comprised of things such as nautical ship models and maps based on each location. Depending on where you are in the restaurant, you might get a more European or Colonial vibe since the restaurant spans across both Fantasyland and Liberty Square as said earlier.

There is so much detail that went into Columbia Harbour House, not even the location of a restroom went overlooked In 2015 the African area in Disney’s Animal Kingdom expanded, including the Harambe Marketplace.

The theming is based around an African street market residing around a colonial-era train depot.

The word Harambee means working or pulling together and that’s what the Harambe Market represents. The scenery includes what appears to be a vibrant flea market.

Located right next to the Wildlife Express Train of Rafiki’s Planet Watch, the passing train suggests this train depot truly is a bustling area.

You can really get lost in the wall art and posters in the area with clever themed sayings.

I think this area of Disney’s Animal Kingdom goes particularly under the radar. For one, its actual location in Africa isn’t part of the main walkway, and two, the fact that it is an outdoor market, meaning dining here can become quite hot depending on the time of the year. There is even a sign in the marketplace saying “It Is Hot Today”. I believe Africa to be one of the best-themed lands in all of Walt Disney World; Harambe Market is supporting evidence. Restaurantosaurus, the dinosaur-themed restaurant inside of Dinoland USA, opened with the rest of Disney’s Animal Kingdom on April 22nd, 1998.

I believe this restaurant to be a part of one of the most in-depth themings ever created at Walt Disney World. So in depth is how Restaurantosaurus came to be, that the rest of Dinoland USA’s story must be told as well.

In 1946, alongside US 498 (month and year Disney’s Animal Kingdom opened) was a fishing lodge. Like many small towns, there was a gas station, owned by Chester and Hester who provided to the few visitors.

In 1947, the landscape in this small town changed forever when an amateur paleontologist found authentic dinosaur bones. Soon after, the fishing lodge was purchased by a group of paleontologists in hopes of continued dinosaur unearthing. The lodge became the first of two Dino Institutes, practically acting as a paleontologist college as professors and grad students gathered from all around.

Like other colleges with young adults attending, mischief and practical jokes made their way to the Dino Institute. Signs throughout the Institute started to see the suffix of “osaurus” added to them, including the large name Restaurant on the outside, becoming Restaurantosaurus. Inside, numerous signs ended up becoming pranks including a sign that used to say “SLOW 5 M.P.H. ONE WAY” to “SLOW 65 M. illion years P. H. ONE WAY”. In need of additional funding, the lodge opened up a cafeteria, named “Restaurant” and an outside walk-up counter for passing tourists named “Dino-Bite Snacks”. The popularity of the site grew immensely, and the dig site known as the Boneyard was no longer the only attraction for tourists. So many discoveries were made that the Dino Institute turned into a museum of sorts.

A much-needed expansion at the Institute ensued with the Quonset hut which acted as a maintenance bay. In this wing you’ll notice Sinclair oil cans in the Quonset hut, the same oil sold at Chester and Hester’s. It’s a perfect representation of realism in a Dino Institute as Sinclair is a real-life oil and refining company that uses a green brontosaurus as its logo. Sinclair even sponsored a dinosaur exhibit at the same 1964-65 New York’s World Fair that the one and only Walt Disney attended. The exhibit was named Dinoland. Sound familiar? (There even hangs a picture of Walt with dinosaur animatronics at Restaurantosaurus.)

The expedition continued to grow, and so did the Institute, with the addition of the auxiliary tents. Here you will mostly find camping gear and a classic practical joke. Pass through the wrong door and you might take an unexpected shower.

“The Hip Joint” was created for recreation use for students; call it their version of a college recreation and wellness center. The room contains board games, basketball hoop and sporting equipment like Frisbees, badminton, croquet etc. The Hip Joint also contains painted rocks with a message from students who completed the internship. It really gives a personal touch of residence occurring inside the institute. Campuses all over the world often contain a large boulder where students over the years paint/leave messages on. Just beyond The Hip Joint is a converted small dining room from an airstream. The dining room contains a jukebox with an ironic playlist, one song being “All Dug Up” by Elvis Presley. Stop and look at the rest, they’re dinomite! Sometime in the early 70’s, Dr. Helen Marsh was hired to help bring in funding to the Institute. Six months later, Dr. Marsh announced her team; Chrono-Tech Inc. had invented the “Time Rover”, a vehicle capable of traveling back to the time of the dinosaurs. The Time Rover gave the institute the necessary funding, meaning a brand new institute could be built.

Remember earlier when I said this Dino Institute was the first of two to come. The new institute opened April 22nd, 1978 (20 years prior to Disney’s Animal Kingdom opened). The new institute you see today is known as the attraction Dinosaur, where that Time Rover is used. The Dino Institute wasn’t the only one to cash in on the opportunity; back down the road at Chester and Hester’s, the couple began to sell souvenir merchandise to capitalize on tourism.

The whole area became a boon for all.

From the early beginnings of a fishing lodge, the original Dino Institute, Restaurantosaurus, was the centerpiece for the creation of what Dinoland USA is today. The realism of a typical college campus and entrepreneurialism meshed with Dinosaurs, which is basically fantasy to the world at this time, is what makes Restaurantosaurus one of the most fantastic themings to ever walk the Earth. (Dr. Marsh pun for you Dinosaur lovers)

Are there any themings that you particularly enjoy at Walt Disney World quick service restaurants? Leave a comment below!