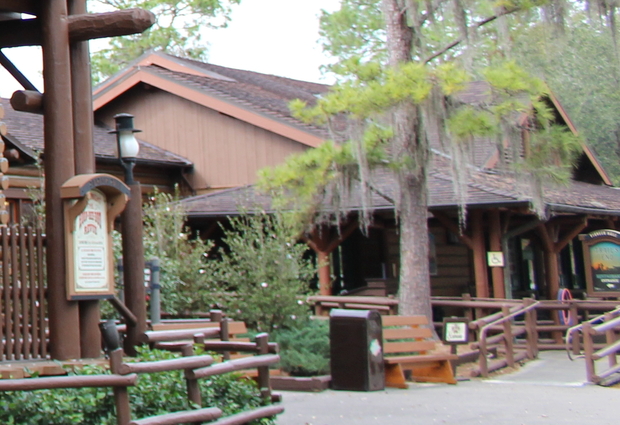 During our stay at Ft. Wilderness, we had gone to the take out area at Trail’s End Restaurant for a “Lone Rider” fried chicken 2-piece with fries (which were really good and crispy) and mac & cheese all for $9.99, which was a really good value. We walked back to our site, sat down, and came to the consensus that everything tasted safely bland (nothing over-spiced). Deciding to return on another day to have a sit-down meal (before tackling the Magic Kingdom in the rain), we figured that ordering different items on the lunch menu instead and at a higher price than the take out menu, there would probably be more flavor. Oh, were we ever right… Upon arrival, we walked the covered, wrap-around decking that had rocking chairs in the corners and the deck was wide enough for a few picnic tables. These areas are very useful if you’ve ordered beer, wine, or cocktails at Crockett’s Tavern’s walk-up window and want to relax before heading next door to the Hoop-Dee-Doo Musical Revue at Pioneer Hall. We made our way back around and were hanging out near the outside counter and the senior staff were busy training a new cast member. Finally, we got to put in our name (with no one else around) and went inside to be seated moments later. The décor is what you would expect: “wooden” everything with trail-themed excursion gear on the walls. Old lanterns, jugs, signs, flags, boats and farm equipment are scattered to exude a cowboy-cozy atmosphere. The drinks were served in mason jars with straws and our food was served on white plates. Our server, Mr. Ed (seriously, that’s what he was asked to be called), was cordial and prompt with our drink refills, but he got uncomfortably close to my face when he was talking and disappeared a lot. Between the loud, happy-hour party behind us (which wasn’t too bad) and the baby crying with an extra loud tablet that screeched, “1-2, buckle my shoe” on repeat to our side, the setting was anything but relaxing despite the warm colors around us and the rain starting to pour outside. Our food was already out when these things started to annoy me, but I eat fairly fast, and they were there before us (I assumed they’d be finished soon), so I just decided to grin-and-bear-it instead of asking to be moved to another table. What we ordered… My wife had two appetizers: southern fried green tomatoes with craw fish rémoulade for $9.00 and the soup of beans and greens that consisted of black-eyed peas, collard greens, and ham which came with cornbread croutons on the side for $7.00. I had an entrée, the Angus chuck cheeseburger that comes with candied bacon, hickory-smoked shredded sharp cheddar, fried onions, lettuce and smokehouse sweet relish sauce (that I asked to be put on the side) with fries for $16.00. I’m not going to bury the lede here… let me tell you, my burger ensemble literally tasted like how a campfire smells. Not joking. I picked apart a few ingredients here and there after my initial bite to see if it was something in particular that was causing this atrocity on my tongue, but to my surprise it was actually just the combination of everything. I couldn’t help but take bite after bite to see if my brain was playing a trick on me, but it was a consistent flavor of burning wood (minus the heat). The candied bacon was great on its own, the sweet relish sauce was surprisingly superb (on its own), the fried onions were fine, and the burger itself was prepared to my liking. I tried adding a dab of ketchup, but it just altered it to ketchup-covered campfire. I assume this flavor is what they’re going for with this entrée, but the joke’s on me, I suppose.

My wife had a much better experience with her two appetizers. She raved about the cornbread croutons and how they especially complimented the soup. The portion of the soup was small, but hot. The presentation of the fried green tomatoes was unexpectedly excellent considering where we were and the style the restaurant has going for it (the take out section we had earlier in the week had given us a bag of fries-like the same brown bag you would take to school). I nibbled on a few crawfish from her plate and could taste the lake or river where the little guys came from, which is fine because it gave a salty characteristic in the after taste without the presence of salt. This dining experience is a 4.5 out of 10. It took awhile to have the opportunity to ask for the check and then receive the check. It took longer to come back for payment, have the card rung up, and return to give the card back. After tax and a begrudgingly, more-than-deserved 17.5% tip we left, our total was $40.00 even. It seemed as though the highlights of our experience couldn’t sway any of the negatives out of our minds. Location is definitely a perk, since I was more than happy to escape the dark clutches of the interior as the cold, gray, rainy, short walk to the Magic Kingdom Transportation Boats immediately lifted my spirits by juxtaposition alone. I guess the next time we eat at Trail’s End, it will have to be the highly-acclaimed breakfast buffet, because this lunch experience came up short.