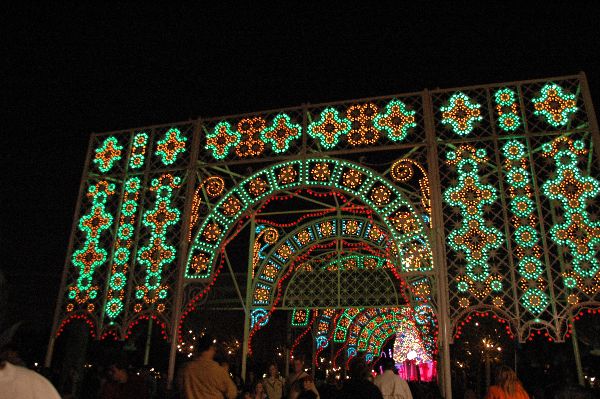 The 2015 holiday season is over and with it, gone is the Osborne lights. For me, this was THE go to attraction during the holiday season!  As a seasonal holiday attraction, what would you like to see replace our beloved Osborne Lights? Here are some thoughts:

The Christmas store at Disney Springs

I have seen folks on the internet say how cool it would be to relocate the Osborne lights to Disney Springs. This would be great, but where would they put it? Also, in my opinion this will never happen because the setup is costly for a totally free attraction. “It’s already free”, you say, but as we know, we must have a ticket to get into Disney’s Hollywood Studios, so there is a cost justification there.  If moved to Disney Springs, because it’s open to the general public, in my opinion, the bean counters at Disney would never go for it.

Bring back the Lights of Winter as version 2.0!

Lights of winter in EPCOT from long ago.

This would be GREAT! This new version could incorporate the canopy like we had in the Osborne Lights, and it can be supersized. I worry about the traffic issues it will cause in that area between Future World and World Showcase when this becomes as much of a “must see” attraction as the Osborne Lights was.

A total Holiday overlay of the Wonders of Life pavilion, inside and out

Wonders of Life pavilion at EPCOT

I am thinking outside the box on this one! In EPCOT, Future World, what was once called the “Wonders of Life” pavilion that is now used for the festival center during Food and Wine and Flower and Garden; what if they did the same “over the top” dancing lights we had in Osborne, both inside and outside the pavilion, or the outside could have dancing lights and the inside could have all sorts of holiday, food, gifts, characters etc. Give us this in Walt Disney World too! I suspect we never got it in Orlando because they wanted it unique to Disneyland?  A plus for the bean counters, I suspect that it costs less than the Osborne lights. Considerations as to not to do this is maybe it would attract too much traffic in the already overcrowded Magic Kingdom? Another overlay we don’t get here in Orlando. Again less costly than Osborne lights, again, maybe it would attract too much traffic in the already overcrowded Magic Kingdom as a negative.

My  dream.  Osborne Lights moved to the city streets in Universal Orlando

I am thinking outside the Disney bubble now! How great would this be! And it would be another volley here in Orlando in the Disney VS. Universal battle! Universal buys the rights and, they have city streets already. I have not looked at the maps side by side; I think Disney Hollywood Studios’ city streets were a larger area, but even a smaller version at Universal would be cool!

The possibilities are endless. Let’s discuss.