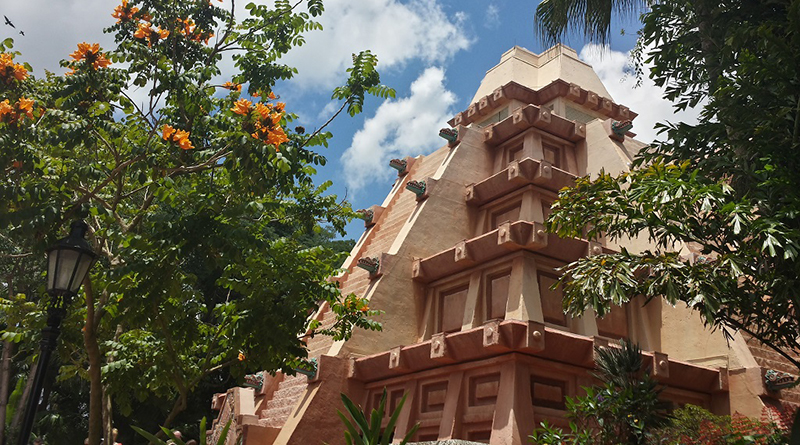 The Mexico Pavilion at Epcot opened in 1982. It was one of the original World Showcase pavilions and has been operating since day one.

While the pavilion was being designed, the Imagineers were going to go with a Spanish Colonial theme; however, a designer who was from Mexico argued in favor of going with a pre-Colombian theme which ended up winning out.

The centerpiece of the pavilion is the pyramid. It was made to resemble a Mesoamerican pyramid.  The pyramid has influences from Mayan, Aztec and Toltec cultures. You climb several flights of stairs and encounter a relief sculpture of Montezuma. It depicts his first encounter with the European explorers; you can make out their blue eyes. The story goes that Montezuma mistook the European explorers for their gods, mainly Quetzalcoatl. Off to the side of the pyramid, still outside, you can see 4 faces of a god with a large nose carved into the pyramid. This is Tlaloc, the god of rain. The purpose behind the large nose is that the nose would actually be a bucket to gather rainfall.

Once inside, you’ll pass by a display of Mexican artwork before you reach the main event.

The main area is themed to a twilit outdoor Mexican village and marketplace, Plaza de los Amigos. At the very end of the plaza is a table service restaurant, San Angel Inn. The restaurant overlooks water and there is another temple off in the distance. Further away still is an erupting volcano. Off to the right is the loading area for the pavilion’s ride, Gran Fiesta Tour Starring the Three Caballeros. Gran Fiesta Tour Starring the Three Caballeros is a slow-moving boat ride that opened in 2007. The premise of the attraction is that we are following along in modern day Mexico as Donald tours popular landmarks. Panchito and Jose attempt to find him in time for a concert they are putting on in Mexico City. The ride features screens, physical scenery, dolls akin to those in it’s a small world, and animatronics of Donald, Jose and Panchito at the end of the ride. When the pavilion opened in 1982, the attraction was originally El Rio del Tiempo, or “The River of Time”. The ride structure was the same as it is now, but it was about the history of Mexico and did not feature the three caballeros. The beginning of the ride went way back to the formation of the world. It was actually a little bit trippy. Oddly enough, lots of people’s favorite part of the ride was the merchandise hawkers who followed your boat and tried to sell you souvenirs.

This pavilion is full of great merchandise. There is a crystal shop, La Princesa de Cristal which features crystal and glassware from the Arribas Brothers. La Tienda Encantada has accessories and fine jewelry. There are enormous sombreros for purchase or picture taking. The marketplace is full of piñatas, t-shirts, shot glasses, carved wooden animals, tequila, hot sauce and original artwork.  Just take some time and wander around the market, you never know what you might find. Donald Duck, dressed in a festive Mexican serape, meets outside the pyramid. If it is raining, he meets inside the Pyramid near the fountain.

San Angel Inn is a table service restaurant inside the pyramid. It is possible to get a waterside table so you can watch the boats from the attraction float by. San Angel Inn is loosely based off a famous Mexico City restaurant of the same name. One of the pavilion’s most popular features is La Cava del Tequila, a tequila bar inside the pyramid. Inside you’ll find over 200 tequilas. The margaritas in here are to die for. You might want to start drinking early, however, as the line is usually out the door.

The pavilion came to notoriety recently when a man was caught by security while attempting to scale the pyramid. He made it almost all the way to the top. Tequila and intense heat do weird things to people.

You may not know, but there is a short trail right after the pyramid’s main entrance. It meanders towards a side exit to the pyramid and along the way there are usually multiple beautiful orchids. At the time this article went to print, there are rumors that the Gran Fiesta Tour attraction might be re-themed to the upcoming Pixar movie, Coco.

The top of the pyramid contains the control tower for Illuminations.

Save Up to 20% On Rooms at Select Disney Resort Hotels Now Through Spring! For arrivals most nights now through April 25, 2020. Book by March 7, 2020
More Information | Get a Quote