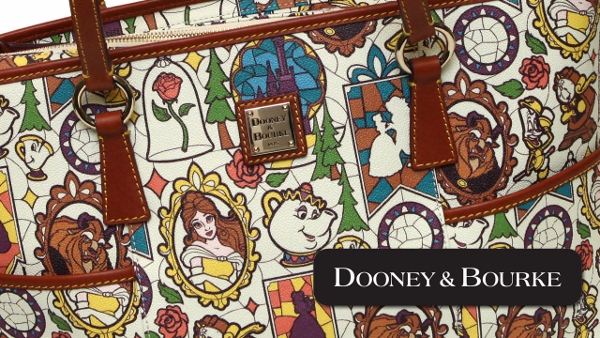 I can’t even express my excitement! Three new, and absolutely fabulous, Dooney & Bourke prints are set for release this month! With all of the designs popping up in stores lately, it is definitely going to be tricky picking just one to take home. However, I do find fault in a few aspects of this release. Be sure to read to the end of this article to find out exactly why. After some delay and the subsequent increasing anticipation, the Beauty & the Beast collection is officially set for release in just two weeks, on August 15. The design features a stained glass print featuring beloved characters from the Disney classic such as Belle, Beast, Cogsworth, and more. It is the perfect option for fall due to its earthy tones and will be even more fun to carry when seeing the live action remake of the movie coming out in March. Styles include the ever-popular letter carrier, a wristlet, and a Helena tote which features two front pockets perfect for keys or a cellphone. Even though I adore the Beauty & the Beast print, I have to admit that the Alice in Wonderland collection is right up there on my favorite list. Titled “Tea Time,” this whimsical design features Alice as she learns a lot of things from the flowers on a golden afternoon. Along the way, she is greeted by a rose, daisy, and, of course, a cheery tea pot ready for a party. You’ll find “Tea Time” in a letter carrier, wristlet, and shopper tote beginning August 22. To help celebrate the 75th anniversary of Walt Disney’s “Dumbo,” be sure to check out this collection being released on August 29. Elephants fly in a chalkboard-inspired print featuring our long-eared friend as he snacks on peanuts throughout the circus ground. Select styles including the shopper tote and letter carrier will include a special anniversary tag honoring the film’s release back in October of 1941. A wristlet will also be available.

The Good & the Bad

I’ve been waiting for the Beauty & the Beast print for months now and am glad to see that it will finally be available. The Alice print was a bit of a surprise but definitely a welcome one being that merchandise for this franchise is often limited especially when it comes to collectibles. These two will probably make their way into my collection.

While I’m absolutely fangirling over these new prints, I will have to admit I also have some concerns.  All three will be made from a coated cotton, not the quality leather construction that Dooney & Bourke is known for. This has me a bit disappointed especially when you consider that the pricing structure will remain along the same lines as leather bags. I’m not the only one either. Disney has received several complaints on social media regarding this move; it has me curious as to how sales will do as a result. To be honest, unless one looks closely at the description, it is not that obvious that cotton is being used. Take a closer look at the Beauty & the Beast design; doesn’t it look like leather? I can imagine the disappointment of those who don’t recognize this when ordering…which leads me to my next issue…

At least for now, the only way you will be able to purchase the bags will be through the Shop Disney Parks mobile app. Disney has been pushing this app quite a bit since the spring and even advertises it on store shelves in the parks. I’m assuming that debuting the new Dooneys through the app is just another way to promote it. However, is that the best option? Fans are used to visiting stores and selecting a bag with that perfect placement of the design elements; this is not possible when ordering through the app. While Disney is insisting there is no information on whether or not we will see these bags in the stores, I highly doubt that they will only be available in this way because they want to put the merchandise out in front of guests. I imagine we will see these three collections on store shelves by September. A similar scenario held true for the Americana print which was originally only on sale via the app, but then quietly made its way to stores within a few weeks. Time will tell.

What do you think of the new Dooney & Bourke designs? Let me know in the comments below! Happy shopping!