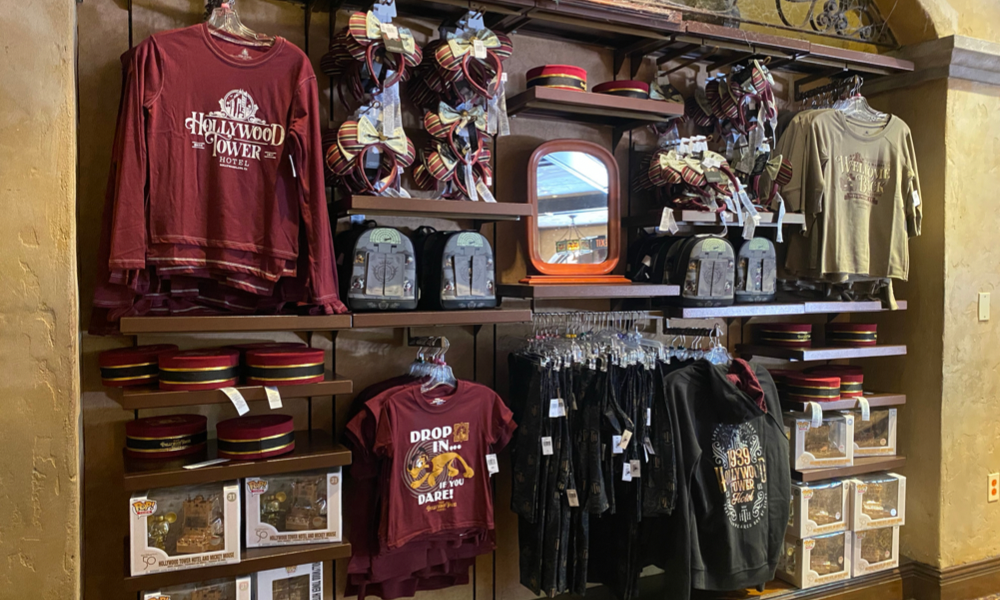 Calling all Tower of Terror fans! New merch has dropped into the beloved hotel gift shop. This store is one of those that amaze me with how themed it is. So themed that sometimes the store even gives me the creeps. Let’s take a look at what’s new in Tower Hotel Gifts at Hollywood Studios.

First up, we have a Hollywood Tower Hotel Red Long-sleeve Shirt that is priced at $44.99. The shirt is soft and a thin material which is perfect for those chilly Orlando days that sneak up on us. It’s definitely a piece that you could wear with layers on colder days.

Next we have the Hollywood Tower Hotel Hoodie which looks so comfy. I am not a fan of zip up hoodies but I adore the design on the back of the jacket so that makes up for the zipper. This hoodie goes for $69.99 which is normal for Disney hoodies and jackets.

This next one is actually really cute. I love the design of Minnie on this Grey Hollywood Tower Hotel Sweater. This sweater has a cut-off look to it making it look a little more fashionable than the other new pieces of merchandise. This sweater cost $39.99. I also love the saying they used for this sweater, overall this is a perfect sweater and I would buy it.

As I was snapping pictures a Cast Member came up to me and let me know the kids shirt in this area is new too.

This Red Hollywood Tower Hotel Youth T-shirt is adorable, I mean just look at how cute Pluto looks. This t-shirt is priced at $19.99 which is normal for kids shirts these days.

This next item is not new to the store but it is something that sells out very quick.

This Hollywood Tower Loungefly could be the cutest and coolest Loungefly ever. The front of the bag has elevator doors that open and close. When he doors open they reveal Mickey and Minnie in the elevator. Now we all know these bags aren’t cheap, the bag goes for $85, do you think this bag is worth $85?

Well friends, that is it for us here at Tower Hotel Gifts at Hollywood Studios. Did any of the new merch catch your eye? If so which piece would you buy? Let us know in the comments.