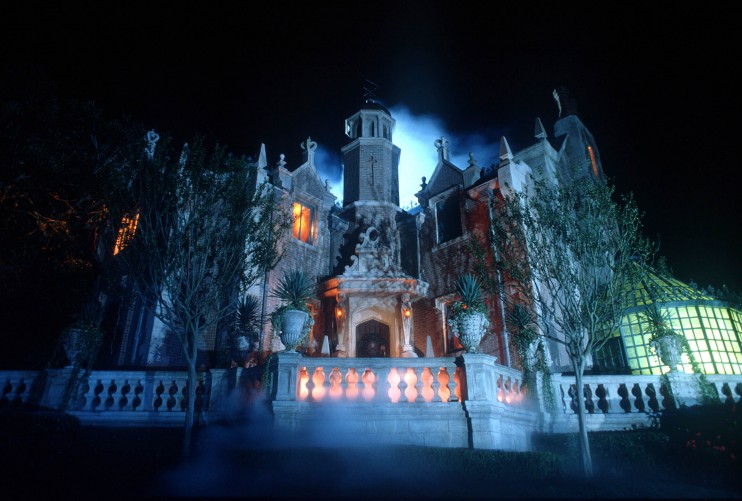 Get ready, foolish mortals! Three brand new books featuring a favorite Disney Parks attraction, The Haunted Mansion, are on their way! Including well-known characters and new stories, these texts are sure to be fan favorites. The books are geared towards different age levels and each have their own unique spin on the attraction itself. Let’s take a look at what is to come!

Tales from the Haunted Mansion – Volume 1 : The Fearsome Foursome

Tales from the Haunted Mansion – Volume 1: The Fearsome Foursome is the first in a new series of chapter books for upper elementary to middle school readers. The texts center around the previously unknown stories of several of the Mansion’s 999 ghosts – one ghoul per book. Each features eerie illustrations and a three-piece cloth cover; they are all designed to look like they came directly out of the library in the Haunted Mansion. To top it off, the books’ narrator (and mysterious author) is the house librarian, Amicus Arcane.

“Our library is well stocked with priceless first editions, only ghost stories of course, hmhmh. And marble busts, of the greatest ghost writers, the literary world has even known.”

Haunted Mansion fans will delight in seeing elements of the attraction sprinkled throughout the story. This includes tidbits from the ride spiel, appearances by familiar characters, and even references to famous Mansion artifacts (is this haunted room actually stretching? Or is it your imagination?). Because the stories are geared towards older readers, note that some might find them a bit frightening a la R.L. Stine. They are a level up from Goosebumps, but not too spooky for most. Reluctant readers, in particular, will eat this series right up. Want a sneak peak? You can take a look at the first chapter by clicking here. Looking for something a bit tamer? Disney Parks Presents: The Haunted Mansion might be more your style. This hardcover picture book celebrates the Haunted Mansion attraction that leaves everyone singing “Grim Grinning Ghosts,” which was penned in the late 1960s. Gilleard’s textured illustrations take readers on a guided tour deeper and deeper into the Mansion including stops at the grand hall, portrait gallery, attic, and more. To top things off, all copies of the book come complete with a CD featuring music from the attraction. In the future, other attractions will be the focus of upcoming Disney Parks Presents books including Jungle Cruise and Pirates of the Caribbean. Eric Geron, Associate Editor with Disney Publishing, said, “The books are a fantastic way for readers to relive classic Disney attractions from the comfort of their own homes or to experience them for the very first time.” This would be a great way to introduce younger Disney fans to what they might see on a trip to Walt Disney World or Disneyland.

Comic books your thing? Beginning in March, Marvel debuted a new Disney Kingdoms comic focusing on the Haunted Mansion. The comics join together in a series of five issues, all of which have not hit the shelves yet. However, hold yourself off just a bit longer for the hardcover collection which will be released in the fall. Each individual comic will be included and tells the story of Danny who finds himself trapped in the Mansion. Along the way, he meets some creepy characters including Madame Leota, Constance the Bride, and even the legendary Hatbox Ghost, who are committed to keeping him in their grasps! Will our fearless protagonist escape? There’s only one way to find out! All in all, I am excited for these new books to make their way onto the shelves. There’s something for everyone! Which one is your favorite?