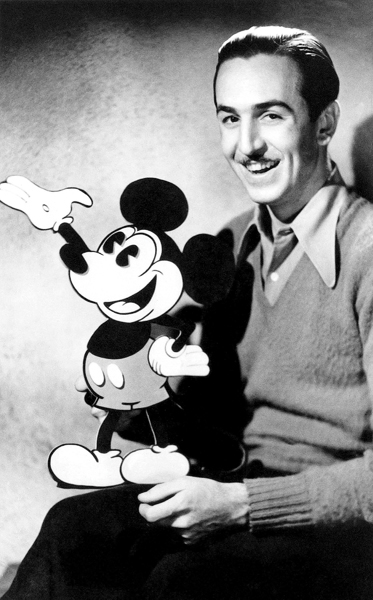 ShareTweetSubscribe
Walt Disney is a part of Disneyland. This Magic Kingdom was his idea - his dream. Unlike his films, which were finished the moment the director yelled, "That's a wrap!", Disneyland would be alive and everchanging. A Park that reacted to its visitors, and a Park that Walt Disney could endlessly reimagine, innovate, and grow. As a result, guests can feel the spirit of Walt Disney in Disneyland to this day. Walt Disney with his pal Mickey Mouse. Walt Disney passed away on December 15, 1966, and Disney California Adventure opened on February 8, 2001. You would assume the hand of Walt did not touch that Park. But Walt did have a hand in planning Disney California Adventure. A few years after Disneyland opened, Walt began thinking about building a second park at Disneyland. One of the ideas Walt had was a park showcasing all that California had to offer. Sound familiar? Of course, with Walt a small idea would grow into a large one. He put aside the idea of a second theme park in California to focus on an idea he had to improve the future of humanity by building the City of the Future. A city that would solve the urban problems modern cities were grappling with. Despite Walt Disney never having designed or setting foot in Disney California Adventure, there are many ways you can still connect with Walt. When you walk through the gate of California Adventure and step onto Buena Vista Street, you are taking a step into the story of Walt's life. Buena Vista Street is a nostalgic and sanitized look at Los Angeles as it could have appeared to Walt Disney when he stepped off the train in California in 1923 and through the 1930s when Walt and Roy were starting their studio. The Streamline Moderne entrance you just walked through is based on the Pan Pacific Auditorium in the Fairfax District of Los Angeles that opened in 1935. One of the designers of that auditorium was Welton Becket. Walt and Welton became friends, and Welton designed the Progressland Pavilion at the 1964-65 World's Fair and several resorts at Walt Disney World including the Contemporary Hotel. Let's walk down Buena Vista Street together to see and hear more of the stories it has to tell about the life of Walt Disney. Welcome to Disney California Adventure! In Buena Vista Plaza, look to your right and you'll see the Sepulveda Building and the location of the washrooms. There you'll see a sign for Lessing, Kamen and James Counselors at Law. These are three men who played central roles in the legal history of Walt Disney. Gunther Lessing was a lawyer hired by Walt to protect the copyrights of Mickey Mouse. He rose to become a company vice president and general counsel. Kay Kamen was the exclusive representative of Disney character merchandising from 1932 - 1949. Cyril James was a London-based lawyer responsible for Disney's international merchandising and film distribution from 1938 - 1972. Walt's legal team. Across the street, Oswald's Gas Station is named for Oswald the Lucky Rabbit who is Walt Disney's first popular cartoon character. Oswald starred in 26 silent Disney cartoons in 1927 and 1928. Unfortunately, due to a contract dispute, Walt Disney lost the rights to Oswald to Universal Studios. However, this loss inspired Walt to create Mickey Mouse. The story ends happily, though, because in 2006 Disney secured the rights to Oswald the Lucky Rabbit and brought him home. Oswald now enjoys greeting guests on Buena Vista Street. What a lucky rabbit!

Gas up at Oswald's! The Chamber of Commerce and Guest Relations is at 2610 Buena Vista Street. The "10" in the address number refers to 1910, the year Elias Disney moved his family from Marceline, Missouri to Kansas City.

Next door the Los Feliz Five & Dime is themed to a vintage five-and-dime or variety store that could have been found in Los Angeles' Los Feliz neighborhood, where Walt Disney moved his cartoon studio after he had outgrown his original location on Kingswell Avenue.

Los Feliz Five & Dime Big Top Toys Store, 2642 Buena Vista Street, is a tribute to Walt Disney's animated classic Dumbo. The "42" in the address recognizes the year Dumbo was released - 1941. That may seem strange, but only even numbers are used on the east side of Buena Vista Street so the number was rounded up. However, Dumbo was still playing in theatres in 1942.

Big Top Toys You most likely are standing beneath the Hyperion Bridge that spans across Buena Vista Street. This bridge is modeled after the Glendale-Hyperion Bridge, built in 1928, connecting Los Angeles' Silver Lake neighborhood to Glendale. Carthay Circle Theatre - Then and Now. Continuing back down the west side of Buena Vista Street, we'll see the Fiddler, Fifer and Practical Cafe. The cafe is named after Fiddler Pig, Fifer Pig and Practical Pig - the Three Little Pigs from Walt Disney's 1933 Silly Symphony. The film's award-winning song, "Who's Afraid of the Big Bad Wolf," rallied our Depression-weary nation.

Enjoy a bite to eat and watch the world go by. Clarabelle's Hand Scooped Ice Cream Parlour, 926 Carthay Circle, promises an "udderly incredible" experience. An ad for the shop claims, "Our cones provide a moo-veable feast." This ice cream and soda fountain is a tribute to Clarabelle Cow, a character who debuted in the 1928 short Plane Crazy as Mickey Mouse's friend. She has played a supporting role in many Disney films. The 926 address refers to 1926, the year Walt Disney moved his growing cartoon studio from Kingswell Avenue in Los Angeles to a larger studio at 2719 Hyperion Avenue. The sweetness continues at Trolley Treats Candy Store named after the electric Red Car Trolley that travels up and down Buena Vista Street. The Red Car Trolley is modeled after the real Los Angeles Red Car Line. In the shop window is a model of Rock Candy Mountain which was once a feature planned for Disneyland's Storybook Canal Boats. Had it been built, it would have been Disneyland's first mountain. The original model was sculpted by Imagineer Harriet Burns. Rock Candy Mountain - Looks good enough to eat! After purchasing your favourite sweet at Trolley Treats, go next door to Atwater Ink & Paint Supply Store. Atwater refers to the Atwater Village district of Los Angeles, a neighborhood frequently visited by Walt's animators in the early years of the Walt Disney Studio and the location of the Tam O'Shanter Inn. Ink & Paint was the name of the Disney Animation Department that used to hand-trace the outlines and hand-paint the colours for all Disney films and cartoons. Walt Disney's wife, Lillian, was working as an ink-and-paint artist when she met Walt. Above the supply store is the Atwater School of Art and Animation. Look for the sign listing the school's instructors - Messrs. Clark, Larson, Johnston, Thomas, Kimball, Davis, Kahl, Lounsbery and Reitherman. These were the last names of Walt Disney's most trusted animators, frequently referred to as the Nine Old Men.

A homage to Walt Disney's senior animators. Next door you'll find Julius Katz & Sons Appliance Store, 2705 Buena Vista Street. Julius Katz refers to Julius the Cat, an animated cat who starred with the live-action Alice character in Walt Disney's silent Alice in Cartoonland short films of the 1920s. The "05" in the address refers to 1905 and the year Elias Disney moved his family from Chicago to Marceline. Despite being born in Chicago, Walt so loved Marceline he always considered it his hometown.

Julius Katz & Sons Julius Katz' original shop, Julius Katz Show and Watch Repair, is next door at 2701 Buena Vista Street. The "01" in the street address is a tribute to 1901, the year Walt Disney was born. For a healthy snack, stop by Mortimer's Market. Mortimer is the name Walt Disney first gave to Mickey Mouse. As the story goes, Lillian thought the name Mortimer was too stuffy and suggested Mickey as a more friendly-sounding name. Walt wisely listened to his wife. However, Walt Disney later created a second mouse named Mortimer who debuted in the 1936 cartoon short Mickey's Rival. If you look closely at the grey, bas-relief panels on the second story of the building, you may spot two mice.

Mortimer's Market We are now back in Buena Vista Plaza at the Kingswell Camera Shop. This shop is named after Los Angeles' Kingswell Avenue, the street where Walt and Roy Disney opened the Disney Brothers Studio in 1923. Now you have walked through the early life of Walt Disney. You are, no doubt, tired. Why not ride the Red Car Trolley to your next destination? Be sure to take notice of the number of your trolley. Trolley 623 is a nod to 1923, the year Walt Disney arrived in California. Trolley 717 reminds us of the date Disneyland opened in 1955 - July 17.

Clang, clang, clang! As you explore all the lands of Disney California Adventure, be sure to stop by the Storytellers statue of Walt Disney and Mickey Mouse, and note the depiction of Walt as a humble, optimistic, young man filled with grand ideas. May Walt's life and example lead you to reaching your potential and fulfilling your dreams.