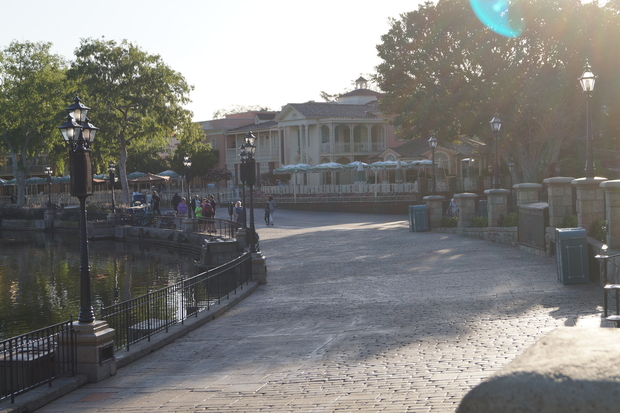 ShareTweetSubscribe
When Disneyland opens at 8 a.m., it's a magical time. Even for people who are not morning people, the benefits of showing up from the beginning of the day shouldn't be discounted. Remember, waking up for you is just as hard as it is for most other people. That means between 8 a.m. and 10 a.m. the park is at its emptiest - and that's a big advantage. 1) (Almost) Line-free riding It's getting harder and harder to find short lines in Disneyland, but the early morning is still the best bet. An hour in the early morning is worth at least two during the cramped afternoon. If the goal of your visit is to ride on as many attractions as possible, the morning can't be beat. To really get the most out of those quiet hours, go to Peter Pan's Flight in Disneyland, or Toy Story Midway Mania in California Adventure. These two rides tend to get huge lines later on in the day and don't have FastPasses. 2) Greetings Disney cast members don their over-sized Mickey gloves and station themselves at the end of the tram trip, the entrance, and along Main Street waiting to greet guests. It'd be a shame if there were no one to say hello to. It's the added touches that makes Disneyland a gold standard in theme parks, and having lines of morning greeters is a pretty nice extra. 3) Climate Anaheim gets hot. Standing among tens of thousands of other guests in the broiling sun is inevitable, but enjoying a few hours of cool, refreshing serenity is possible for those who make the effort. Why not try and knock out the most heat-intense outdoor lines - Matterhorn, Pirates of the Caribbean, Splash Mountain, Haunted Mansion, Peter Pan - early in the morning, then retreat to shaded shows and indoor activities when the sun is blazing? Don't forget about California Adventure, the early morning there is also beautiful.

4) Breakfast Mickey-shaped pancakes aren't served all day. It's only a special treat for people who are willing to fight an alarm clock for it. You can find them at Rancho Del Zocalo restaurante in Frontierland (they moved from River Belle Terrace in February). There's also the character breakfast in the Plaza Inn, but that can be kind of expensive. 5) Meltdown-Free Atmosphere Perhaps the most important reason to come during the morning is because everyone is just more pleasant. Sure, getting out of bed first thing in the morning will frustrate a few kids, and adults, and put them in a bad mood, but it's far more relaxed then the mid-afternoon crankiness and occasional complete family breakdown. Being around happy people is just more pleasant. For a little extra bonus, the duck families in Disneyland come out more often in the mornings, before the hordes of humans arrive. Watching some adorable ducklings isn't probably a high priority for most families, yet they can easily become a highlight of the day for little kids. Granted, it's only a seasonal event for Spring visitors.
ShareTweetSubscribe
Get 2 Extra Days Added to Your WALT DISNEY WORLD Ticket!