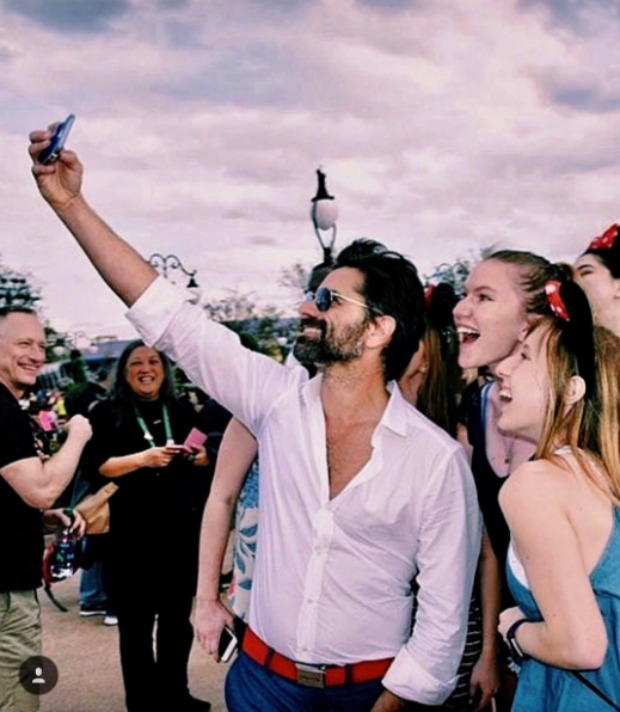 If you’ve been watching ABCs The View taking place at Disney’s Animal Kingdom this week, you may have heard John Stamos talking a little bit about DisneyBounding. For those of you who are not aware, DisneyBounding is when you wear your own regular clothes in such a way that they resemble your favorite Disney character. For example, red shorts with yellow Converse, and a black t-shirt could be considered DisneyBounding as Mickey Mouse; you get the idea. Here is an excerpt from the show where he along with Whoopie Goldberg and the rest of the hosts had the discussion.

It appears that Stamos had quite a bit of fun during his trip to Walt Disney World with his girlfriend. He mentioned that she’s quite the big Disney fan and had been going through his closets for a couple of weeks prior to their trip to see what kinds of outfits could be put together. Take a look at the photos he posted to his Instagram account during his trip!

In this first photo, he was DisneyBounding as Piglet from Winnie the Pooh.

Bert as the Chimney Sweep from Mary Poppins.

Stamos DisneyBounding as Nick Wilde from Zootopia might be my favorite!

And, this last one where he is DisneyBounding as Prince Eric from The Little Mermaid is adorable!

I’ll be Prince Eric to your Ariel any ol’ time. ❤ @caitlinskybound #disneybound

As you can see, some of the outfits are not quite as obvious as others. You could easily miss this fun little detail if you weren’t paying attention.

If you’re a DisneyBounder, share your photos with us and tell us who you’re dressed as! Also, be sure to stop by the Theme Parks Attractions and Strategies board over on DISboards.com to look at the “Do You DisneyBound?” thread and see where lots of posters there have shared their DisneyBound masterpieces with us already.