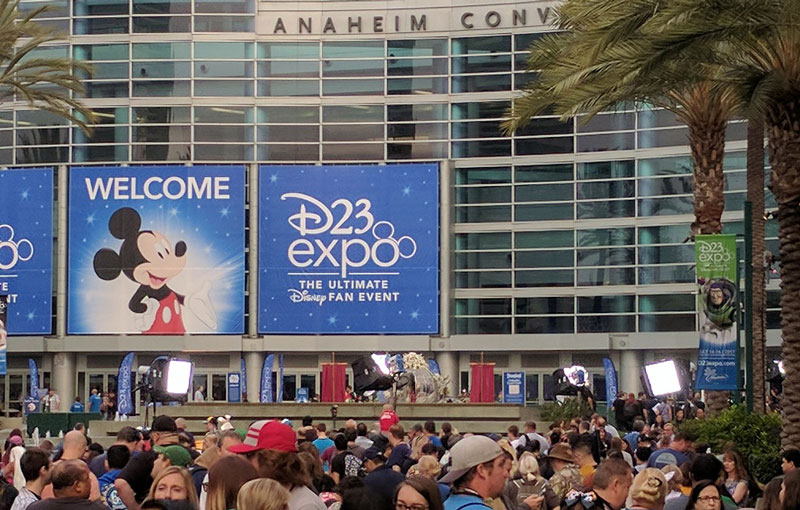 If you are an avid Disney fan, by now you will have heard lots of horror stories about the 2017 D23 Expo. You have also most likely heard some great stories, however, and you might be conflicted on whether you should attend the next Expo.

This was my first year attending. I have been to different fan conventions in the past so I had a decent idea of how it was going to work.

First, a lot of the horror stories were true and I experienced them firsthand. D23 is staffed by cast members and convention center volunteers. Sadly, the volunteers and sometimes even the cast members are just not well informed by management and it’s not that they want to give you misinformation, it is that they truly do not know what is going on.

D23 does a good job of taking feedback and trying to improve upon the experience, but the first thing you are going to have to accept if you want to attend is that you won’t always be able to get solid answers out of the cast members or volunteers. Be ready to ask several different people your questions and even then, I would never fully trust them. A big problem at this year’s expo was the Disney Music Emporium’s autograph signings. We wanted to meet Moana’s voice, Auli’i Cravalho, and composer Michael Giacchino. The first time my boyfriend approached the workers at the booth he was told to come back on each artist’s signing day and to purchase the merchandise you needed for a wrist band on those days. Luckily, we are seasoned convention goers and we didn’t quite believe that, so we kept asking around and discovered the we could get in line that day and obtain the wrist bands, which we did. Sadly, there were a lot of disappointed people who were either given misinformation or they just didn’t know what to do and missed the signings.

That is another thing. If you want to attend, be ready to miss out on things and not get to do everything you want. This doesn’t mean you won’t be able to see or do anything you want, you just need realistic expectations and you need to have a solid game plan going into the convention.

For instance, my group had a long list of wants for Friday. We had them in order so our ‘must dos’ were on the top of the list. I think our initial list had about 12 things on it and we were able to do 5 of those. You really just need to temper your expectations. You will get to do and see amazing things, just not all the things you want to do. There was a lot of disorganization with the lines, and a lot of people who had been waiting all morning for the Animation panel got shut out while people who had been waiting an hour or two got in. This was very bad, but D23 tried to make it up to them and they were offered the compensation of a guaranteed seat wrist band for the Live-Action or Parks and Resorts headliner panels the following day.

You also need to plan. The schedule of panels and the D23 app were both released in advance this year.

Many people seemed to not have the first clue about how things worked. In some cases, like the Disney Animation and Pixar booth’s signings, no one knew how things worked because there was never a set plan on how to distribute wrist bands. The first day, wrist bands for the super popular signings were handed out half an hour before the signing. This caused fans to hover in the area and clog the space up for hours in advance. So the two remaining days the employees just randomly handed out the wrist bands and refused to say when that would be. That was probably the worst sign of organization that I saw all weekend. However, just because some signings and booths were very disorganized didn’t mean that others were. I cannot count how many times I heard sad stories about people not getting wrist bands for music signings because they didn’t know you had to purchase the CD or vinyl record. The app plainly stated that you needed to purchase these items in order to meet the celebrity. It is really, really important to look over all the provided materials before you attend. At this point you might be shaking your head and thinking to yourself… “this sounds terrible, I’m not paying money for this”. You need to trust your gut on this; conventions aren’t for everyone. There are excruciating early morning wake ups, food is terribly overpriced, there are lots of lines for everything, and lots of waiting followed by small euphoric moments of happiness and excitement. For many, myself included, these small moments make it all worthwhile.

I had really wanted to meet legendary Disney animators Mark Henn (he’s drawn almost every recent Disney princess) and Eric Goldberg, however, they were at the disaster that was the Disney Animation and Pixar signing. At 2 hours to go until signing there must have been at least 300 people hovering, waiting for wrist bands to be handed out and we had no idea if they’d be handed out in 5 minutes or an hour and a half.

Sadly, we decided it wasn’t worth it so we headed out. We walked around the booth to the other side and what do we see but Mark Henn himself, just hanging out and talking to the one or two people who recognized him. So we were able to chat with him for a few minutes and get a picture with him.

We stopped by Talent Central on Saturday night, right before the floor closed, to ask about the Tangled cast signing on Sunday and how that would work. Ben Schwartz of Parks and Rec fame (he was there because he is going to voice Dewey in the new Duck Tales cartoon) was just hanging out taking selfies with the small group of fans who had spotted him. We ended up hanging out with a bunch of friends we made on a DIS exclusive Adventures by Disney Backstage Magic trip. We ended up making random new friends while waiting in hour-long lines.

I had the time of my life at the Animation panel. We got live performances from Josh Gad (Olaf’s voice) and Benjamin Bratt (a voice in the new Pixar movie Coco). I got to see most of the Disney princesses’ voices. My boyfriend randomly caught a t-shirt from Lasseter and gave it to me.

So this is why you go. You go for those small moments that are so magical and epic that it ends up making the entire trip worthwhile. Hearing Richard Sherman play “Feed the Birds” will be a highlight for me for a long time to come. You go because you are surrounded by so many like-minded people. Just look at some of these epic cosplays. If these people don’t love Disney, I don’t know who does. As John Stamos said in the Imagineering Legends panel on Sunday: “I’ve found my people”.

You’ll see things that will make you impossibly excited for the future of your beloved Disney parks, like the peek into Star Wars: Galaxy’s Edge. You’ll see relics of Disney Parks past that will leave you awed at the parks’ rich legacy.