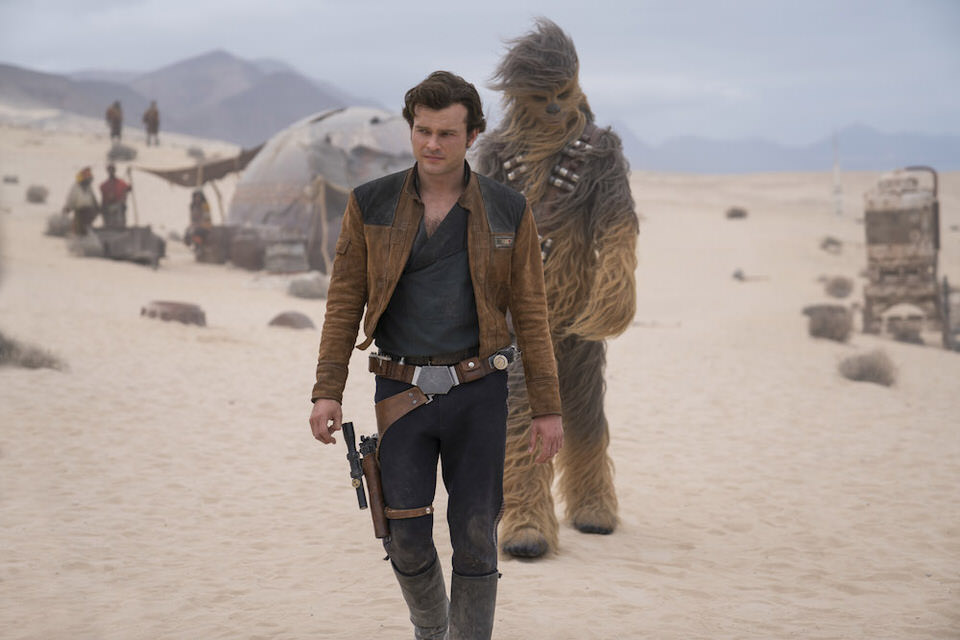 I never thought I’d say it, but Solo: A Star Wars Story actually ended up being very enjoyable. After Rogue One and The Last Jedi things were looking bleak. I’m not pointing at the quality of those two movies, but more or less the tone of the films, with Rogue One being the greater offender. Solo is not without its dramatic moments, but overall it brings back classic Star Wars fun without feeling like one giant fan-pleasing film.

Solo: A Star Wars Story picks up with young Han (Alden Ehrenreich) trying to escape from Corellia to find freedom in the galaxy and become the pilot of his own ship. After a brief turn to the Empire to help achieve his dreams, Solo befriends Chewbacca (Joonas Suotamo), Beckett (Woody Harrelson), and of course, Lando Calrissian (Donald Glover) in order to pull off a job that will get him his ship. Along the way we get a train heist (which you’d expect from any good western movie), romance, betrayal, and most importantly – the Kessel Run. The best aspect of Solo by far is the action sequences. Ron Howard may not be known for his action movies, but the sequences his team put together were gripping for the most part. The train heist seen in the trailers was tense from start to finish. The Kessel Run was visually mesmerizing, albeit a bit short, but left you on the edge of your seat at times. Ultimately, if this is the first time we’d met Han and Chewie and didn’t know their fate then these moments would carry even more gravitas. Knowing that they will walk away from it all does cast a small shadow on the intensity. As far as the acting, it was generally good. Donald Glover was by far the standout as Lando. He perfectly channeled the attitude and charisma behind the character without it feeling like one big imitation. Lando didnt’ get nearly enough time on the screen, but it wasn’t his movie. Alden Ehrenreich gave a good performance, but in my opinion he was only Han by name. After seeing the movie, I’m not really sure that any actor out there could perfectly become Han Solo, but I’m not going to beat up on Ehrenreich too much because of it. I applaud the fact that he didn’t try to do one long Harrison Ford impression, but instead he just portrayed his take on the character. I still don’t believe he was well cast in this movie, but he made the best of the situation. I also have to give credit to Emilia Clarke, Thandie Newton, and Paul Bettany for their supporting roles. It’s always nice seeing Emilia Clarke shining away from Game of Thrones and I think she held her ground in Solo. Woody Harrelson was Woody Harrelson and I don’t mean that as an insult, but it felt like he just showed up to set one day, so they gave him an important part and some time to memorize lines and then threw him in. He’s always good, but his style of non-acting pulled me a bit out of the Star Wars universe.

The ultimate mistake when it comes to characters has to be Rio Durant (Jon Favreau) and L3-37 (Phoebe Waller-Bridge). Rio is an Ardennian pilot that looks like the love child of E.T. and a chimpanzee. He is just utterly obnoxious every time he’s on screen. L3 is Lando’s droid sidekick that’s equally annoying. This could be an issue with the writing or influence from the director, but whoever approved these characters for screen needs a re-evaluation. The movie was paced very well from start to finish, but there could’ve been some significant cuts made, which seems to be the issue with Star Wars movies right now, especially after following in the footsteps of The Last Jedi. The opening sequence drags on a bit and then there are at least two moments where I felt like the movie could’ve ended perfectly, but then it kept going, which reminded me of Rogue One. This wasn’t an issue for the first viewing, but it’s something I feel could have an impact with repeat viewings of the movie.

Overall, considering the production issues that Solo went through with the change in directors, reshoots, and coaching for the main star, I think Solo: A Star Wars Story came out better than it should have. It’s not perfect, but it’s enjoyable the entire time, and I wouldn’t even be against seeing the further adventures of Han and Chewie between Solo and A New Hope. Plus, after the bleaknesses that was the ending of Avengers: Infinity War, this is the perfect cure for the Disney-Pixar-Marvel-Lucasfilm family – a good dose of fun.