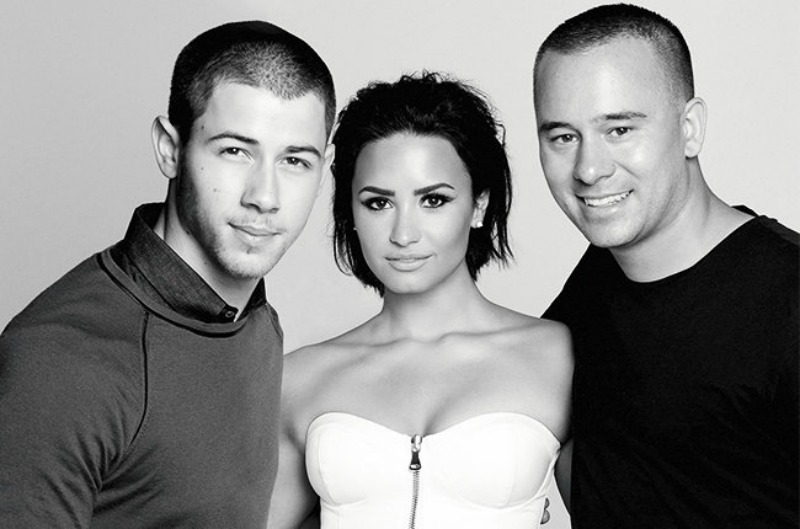 Phil McIntyre (far right above), who has managed several well-known musicians such as Demi Lovato, Nick Jonas, Iggy Azalea, and Joe Jonas/DNCE, will soon be bringing his industry know-how to ABC’s American Idol. Although this is new territory for McIntyre, the manager is no stranger to television work – having collaborated with Disney who was the springboard for the Jonas Brothers and Lovato.

In an interview, McIntyre told Variety,

“I understand the balance between artist development and making good television. I think we have the platform and the heritage brand to be able to do that [with Idol].”

Continue reading below for the exclusive interview Variety recently had with McIntyre to learn more about his role on the show.

“What was the common vision for Idol that you shared with UTA and Fremantle?”
McIntyre: “I see it as, this is a show that has a longstanding history of finding talent, pairing that talent over the course of the season with the right songs and the right creatives, and ultimately taking advantage and leveraging that platform to resonate with pop culture. That’s what makes Idol stand out.”

“There are a lot of music competition shows currently airing, including Fox newcomer The Four. Where does Idol fit in?”
“It all comes down to people want greatness. They want to be entertained. I think that after a two-year hiatus for the show, it feels like the right time. It feels like America is going to be excited to have something they were so accustomed to come back. Based on the talent I saw throughout the auditions, I was very impressed.”

“Talent from the show will be releasing music through Hollywood Records, a label with whom you’ve worked frequently. How do you see the company’s approach to the artists from the show?”
“I’m incredibly excited. Both Demi and the Jonas Brothers were signed to Hollywood Records and ultimately had a tremendous amount of success. So, for me, it’s understanding how to utilize all the platforms and assets of the Disney system to the best of your ability. When you do that, [Disney] is an incredible partner. And Hollywood Records is one of the best labels for developing artists. They understand how to take talent from television platforms and invest in them and guide them. It’s a system I know well and it’s incredibly powerful.”

“Is there a plan to bring in outside music people to work with the contestants?”

“Absolutely. Part of the show will be celebrity duets and we’ll bring in established talent to participate in that.”

“What of your TV experience are you bringing to the Idol table?”
“I was with Demi Lovato every step of the way during the time she was on The X Factor. I was instrumental in her becoming a judge on the show, working with Simon Cowell for a year to help him develop his talent strategy in the U.S., like for Fith Harmony. But I think the hats I wear and the reason they wanted me to be a part of the Idol team is, ultimately, because I am an artist-focused producer. That is my specialty. I understand talent and I understand the art of artist development. I think that the objective is to do that over the course of the season, consending the time period of a typical artist development timeline.”

“Demi’s continued success, now going on over a decade, is impressive. If there was a throughline to her career, what would that be?”
“One of my favorite things about working with Demi is it’s a constant relentless pursuit to evolve. There’s this sense of always pushing to be the best version of yourself, to be able to grow. And that led to so many opportunities for her, whether it’s different duets that she’s done, like Luis Fonsi’s Echame La Culpa that she has out right now and the incredible international streaming it’s doing, or the Cheat Codes song, No Promises. Demi’s documentary, Simply Complicated, that came out in 2017 with YouTube, was a very successful project both from the metrics side and from the impact of sharing her story. That was very much a labor of love and passion and what we kept hearing over and over is how real and authentic it was.”

“The Philymack roster has grown to include Iggy Azalea and The Band Perry. Are you in expansion mode?”
“In the fourth quarter of last year, we felt like we were in the position to grow the roster. We understand our strong suits and what we’re really great at and we’re ready to start that growth. We signed two new artists, The Band Perry and Iggy Azalea, who we’re incredibly excited about.”

“What are your visions for these two acts?”
Both artists are excited to reinvent and I think that’s what we do best. Ultimately, it comes down to music and I think both have made the best music of their careers that the world has not heard yet. Now it’s just about smart marketing and a smart rollout.

“Can we expect to see a Philymack client on Idol as a mentor or duet partner?”
“I don’t know. We’re going to wait and see what talent makes it through Hollywood week and what the pairings are looking like. And at that point, we’ll decide what people make sense.”