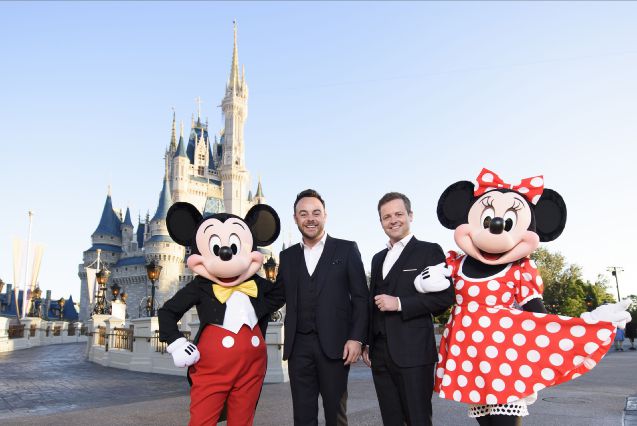 If you are curious about the stage currently occupying the flag pole area in the Magic Kingdom, or perhaps a change in parade hours, there is a perfectly good explanation. Ant and Dec will be filming their 14th series(or season, in America) finale for the Saturday Night Takeaway, a popular program from the United Kingdom. ‘Ant and Dec’ are Anthony McPartlin and Declan Donnelly, a comedy/production duo who have hosted the Saturday night show since 2002. They will be joined at the park by co-hosts Scarlett Moffatt and Stephen Mulhern, as well as 200 of their viewers who will be flown in for the show. The finale will air live this Saturday, April 8th, in the United Kingdom at 7 pm. Disney’s afternoon Festival of Fantasy Parade has been rescheduled from 3pm to 5pm for this Saturday.

Updated 4/10/17 to add an excerpt from the taping where Ant & Dec perform Supercalifragilisticexpialidocious: