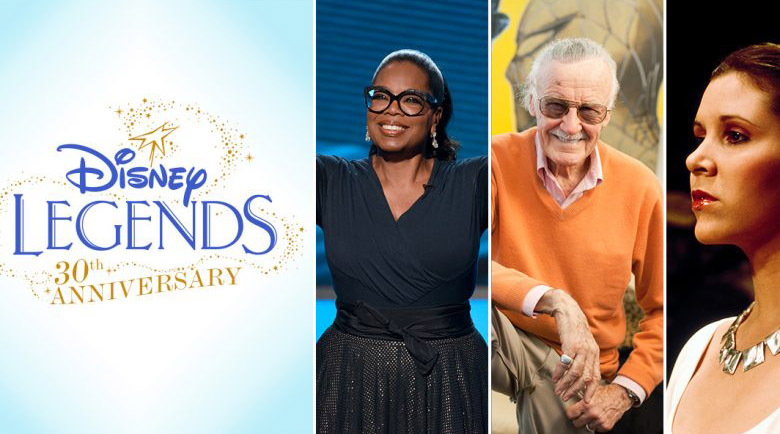 This year marks the 30th anniversary of the Disney Legends award, created to honor those who have made significant contributions to the Disney legacy. To mark the occasion, D23 has created a unique stand-alone issue featuring all 267 current honorees, as well as the 10 new Legends who were inducted this morning at the D23 Expo. Since 1987, the award has been given to individuals who have worked with and for Disney in front of the camera and behind the scenes, from the shining stars of the silver and small screen to the creative minds behind its films, attractions, music, and entertainment.

Carrie Fisher: Disney films included Scream 3 and Jay and Silent Bob Strike back, but, of course, her most notable role was as Princess Leia throughout the Star Wars franchise. Clyde “Gerry” Geronimi: Worked as an animator on Mickey Mouse, Silly Symphony, and Pluto cartoons. Sequence Director on Victory Through Air Power, contributed to The Three Caballeros, The Adventures of Ichabod and Mr. Toad, Cinderella, Peter Pan, and One Hundred and One Dalmatians. Supervising Director for Sleeping Beauty. Clyde’s kids accepted his award. Mark Hamill: Recognized for his roles on ABC’s General Hospital, Disney’s Miles from Tomorrowland and Milo Murphy’s Law, but most notably as Luke Skywalker in the Star Wars franchise. Wayne Jackson: A technician and machinist who started at Disney rebuilding attractions from the 1964-65 World’s Fair for Disneyland. Helped develop Audio-Animatronics® technology, as well as helping bring “Pirates of the Caribbean” and “The Haunted Mansion” to Disneyland. Julie Taymor: A Grammy, Emmy, and Tony award-winning filmmaker, with successful Broadway credits such as her adaptation of The Lion King which has earned 11 Tony nominations and earned her Best Director, Best Costume Designer, and Best Musical for the show. Her film resume is also impressive: A Midsummer’s Night Dream, Titus, The Tempest, the Golden Globe-nominated Across the Universe, and the Oscar-winning Frida. Oprah Winfrey: An award-winning producer, actress, talk show host, and philanthropist best known for The Oprah Winfrey Show, which ran for 25 seasons. Her acting/producing credits include: The Color Purple, Beloved, The Women of Brewster Place, Tuesdays with Morrie, Before Women Had Wings, Their Eyes Were Watching God,The Princess and the Frog, and Disney’s upcoming A Wrinkle in Time. Whoopi Goldberg: The big surprise of the Disney Legends Awards Ceremony – Whoopi Goldberg has just been honored as a Disney Legend! Whoopi Goldberg is one of a very elite group of artists who is an EGOT, which is an acronym for a person who’s won an Emmy, Grammy, Oscar, and Tony. She has won Emmys (as host of AMC’s Beyond Tara: The Extraordinary Life of Hattie McDaniel, and a Daytime Emmy for The View), a Grammy (Whoopi Goldberg), an Oscar (Ghost) and a Tony (Producer of Thoroughly Modern Millie). Today at D23 EXPO: The Ultimate Disney Fan Event, she can add Disney Legend to this impressive list, making her the one and only LEGOT recipient! What an honor!