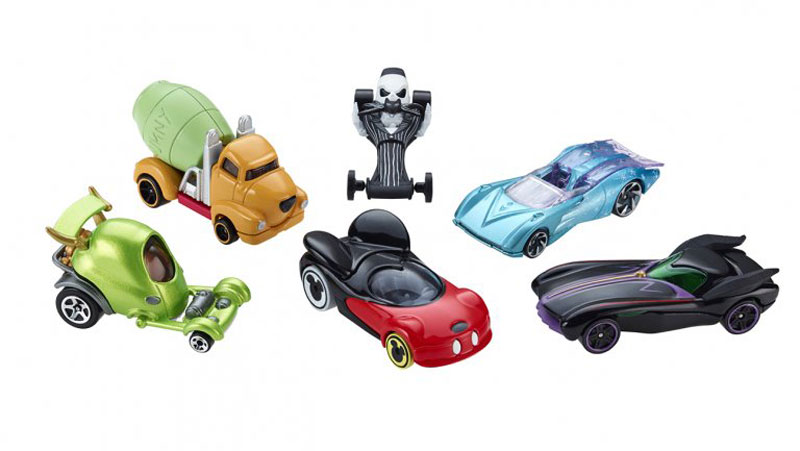 ShareTweetSubscribe
Some new toys will be hitting the streets in the near future that are sure to be a must-have for Disney fans and collectible car enthusiasts of every age, all thanks to a partnership between Disney and Mattel. New entries to the Hot Wheels Character Cars line will include beloved Disney favorites, with the initial launch showcasing unique designs for Mickey Mouse, Winnie the Pooh, Frozen's Elsa, Monsters Inc.'s Mike Wazowski, A Nightmare Before Christmas' Jack Skellington and Sleeping Beauty's Maleficent. These aren't just decals thrown on the side of classic cars, either. Hot Wheels design manager Brian Benedict explained some of the detail behind the creation of the new toys, saying

"When creating a Hot Wheels Character Car, we carefully consider how to merge elements of real-life vehicles with those of fictional characters to bring the car to life in creative and fun ways that we know will appeal to kids and collectors alike. With the new Mickey Mouse car from our Disney Character Car line, Mickey has an iconic look that our team reimagined as the quintessential sports car, with a heavy circular theme carried throughout the entire vehicles design, reflective of his famous ears." Hot Wheels is currently the #1 toy brand in the world. First launched in 1968, Hot Wheels currently has 800 models available, and Mattel boasts that there are 8 cars sold every second. The Character Cars line is a large part of that success, having already created designs for Disney franchises Marvel, Star Wars, and the Muppets, as well as properties like Super Mario, the DC Universe, and Looney Tunes. Hot Wheels senior vice president and general manager Chris Down said, "Character Cars, introduced in 2010, are now an evergreen part of our vehicle assortment and have been instrumental in growing Hot Wheels licensed die-cast by double digits." The Disney Character Cars will be available for purchase later this year.