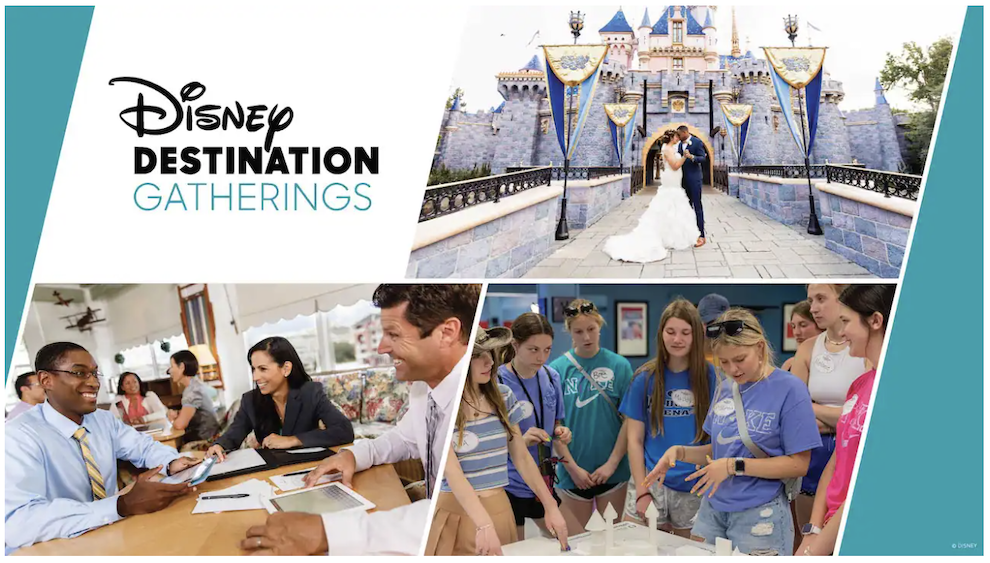 If you have ever dreamed of taking your event planning to the next level and adding a few sprinkles of pixie dust, look no further. The most recent concept from Disney is centered around reconnecting with friends and loved ones. It’s a celebration of events that create memories bedazzled with the magic of Disney. From family reunions and weddings to school trips and conventions, Disney is bringing guests together in meaningful ways to make up for lost time. Have a look at the new promotion below:

With a meticulous approach to every need, Disney professionals bring the Disney difference to conferences, association meetings, incentive programs, social events and corporate meetings held at Walt Disney World Resort in Florida, Disneyland Resort in California, and Aulani, A Disney Resort & Spa in Hawaii, and aboard Disney Cruise Line ships.

Bring on a love story and Disney does the rest. For three decades, engagements, weddings, honeymoons, and vow renewals have come to life in magical ways thanks to the pixie dust that Disney brings to each celebratory event held at Walt Disney World Resort;  Disneyland Resort; Aulani, A Disney Resort & Spa; or aboard Disney Cruise Line ships.

Imagination is at the heart of what Disney does; it’s a spirit of creativity that also drives real-world applications for students, inspiring them in the topics of leadership and innovation, arts and humanities, science and technology and performing arts. Workshops offered at Walt Disney World and Disneyland Resorts include immersive hands-on learning so students from elementary through high school and college can build their skill sets and prepare for life’s adventures.

Can you picture an upcoming event you might have Disney-fied to the point of enchantment? I’m fighting the urge not to turn all of my events into Disney Destination Gatherings! Well, my credit card balance is, anyway.

What would your dream Disney Destination Gathering be?