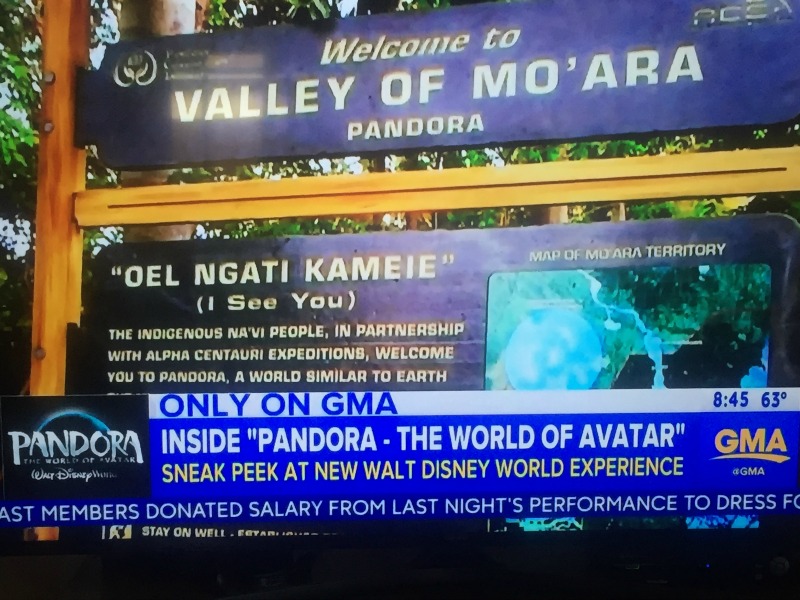 We told you yesterday that ABC would be offering sneak peeks into Pandora – The World of AVATAR throughout the day today. In case you missed the first excerpt on Good Morning America, we’ve got you covered.

They started off with a little teaser of Paula Faris heading into the new world at Disney’s Animal Kingdom through the familiar door we’ve been seeing online.

Faris took a little tour with Pandora producer Jon Landau and Imagineer Joe Rohde where she was given a bit of history on how when the movie was made, it was completely a virtual world and how they did not build any of the Pandoran sets. We learned that there are 4 sequels in the works and that everything Pandora – The World of AVATAR reveals will become research for the production designers and their cast so that they will feel like they’ve actually been to Pandora. It was said that there are two Pandoras; one during the day and another at night. The bio-luminescent flowers and lush plants will look completely different depending on the time of day guests visit. There will even be themed food – check out the Na’vi Blueberry Cheesecake. Landau toured Faris into what looked to be the attraction queue of Avatar Flight of Passage where they were scanned and matched to their own Avatar and then they were “decontaminated” before entering the ride. Here is a look at the clip that aired on this morning’s show:

Be sure to tune into “The View,” at 11:00 a.m. Eastern where James Cameron will take Whoopi Goldberg on a tour, then “The Chew” at 1:00 p.m. Eastern, and lastly, “Nightline” will offer an in-depth look at the fascinating new land.