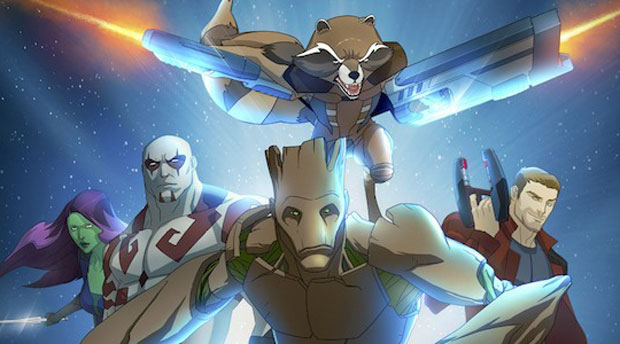 During the Marvel Animation panel at the San Diego Comic-Con this weekend, the studio gave us an idea of what to expect from Disney XD’s animated Guardians of the Galaxy program and how it relates to the Disneyland Resort attraction. Season 3 of the show’s plot will expand on the storyline from Guardians of the Galaxy – Mission: BREAKOUT!

Marsha Griffin, Marvel Animation’s Senior Vice President of Production, had this to say,

The Disney California Adventure attraction allows guests to take part in a new adventure for the Guardians, as they try to escape the Collector. Taneleer Tivan has captured the team to display in his collection, and Rocket enlists the help of the guests to break them out.

Season 3 of the show will also use different art styles for a few of its episodes, and feature an animated cameo by Stan Lee as an elevator operator at the Collector’s museum.

Intertwining their animated content with their park attractions seems to be a natural cross-promotion for Disney. What degree of success it will have, only time will tell, but it is not inconceivable for this to become a larger trend as Disney expands its parks and its animated content.