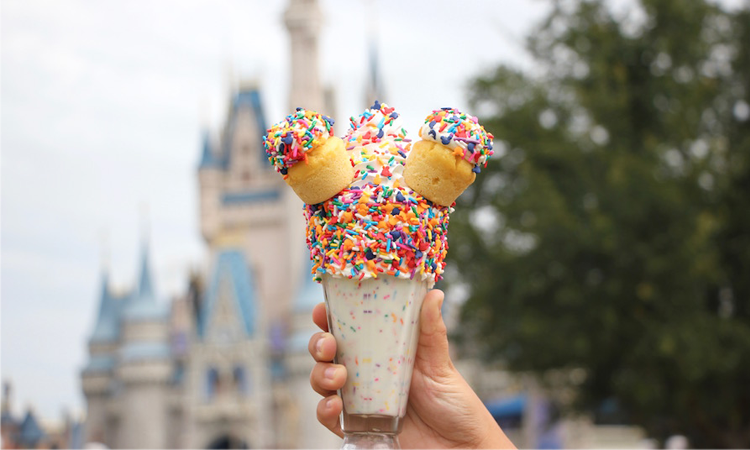 The Disney Parks Blog just released their monthly overview of the treats and snacks available in the Disney parks. September is coming to an end in a few days, so many of these treats will only be available for a short time, but they’ve also shared sneak peeks of what is to come in October.

The Plaza Restaurant in the Magic Kingdom is offering a limited time Birthday Cake Milkshake, which will be available until the end of the month. The Birthday Cake Milkshake is made of confetti vanilla ice cream and has “a sprinkle-rimmed glass topped with whipped cream, more sprinkles, and two mini birthday cake cupcakes.” The Plaza Ice Cream Parlor offers an ice cream flavor of the month. Get the chocolate chip flavor while it still last, and get excited for the just-announced pumpkin flavor which will be available on October 1. Over at Disney’s Animal Kingdom, there are new Apple Cider Donut Holes, which are available at the Isle of Java. This sugary treat is covered in icing and cinnamon sugar. New Coconut Macaroons are available over at the BoardWalk Bakery. In addition to the macaroons, the Boardwalk Bakery will also be offering a Mermaid Cupcake, which is a “yellow cupcake filled with coconut cream mousse and topped with whipped cream, toasted coconut, a white chocolate mermaid tale, fondant shells, and crispy pearls.” Intermission Food Court at Disney’s All-Star Music Resort has a Mermaid Cupcake of their own, which “is a vanilla cupcake topped with buttercream and filled with white crispy pearls,” but this one will only be available until the end of the month. Don’t fret if you’re going to miss out on this limited time Mermaid Cupcake because starting in October Intermission Food Court will be offering a Maleficent Cupcake. The Maleficent Cupcake is a “chocolate cupcake is filled with spiced chocolate and topped with vanilla buttercream and chocolate horns.” Fans of the green aliens from the Toy Story films might be interested to know that The Artist’s Palette at Disney’s Saratoga Springs Resort & Spa will be offering a dessert named The Chosen One. This dessert features “a green apple mousse with a caramel center.”