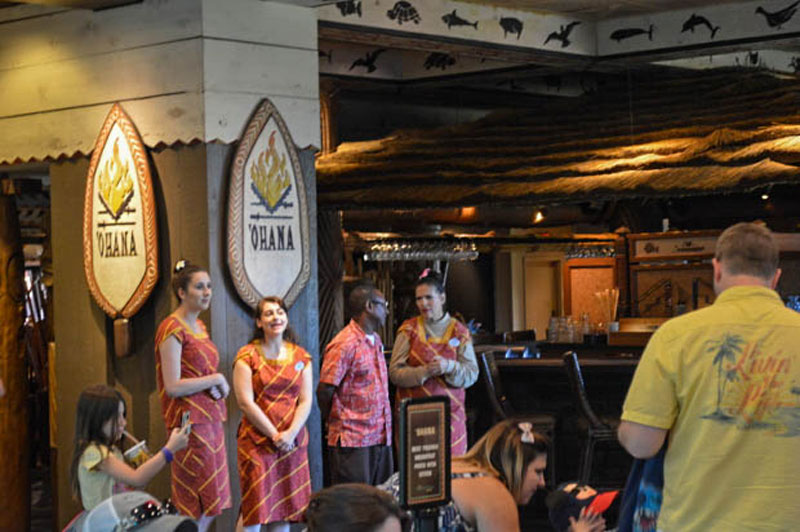 Dining alone is a weird taboo that honestly we should all get over. It’s especially great in Walt Disney World, whether your group has split up to do different things, or you’re an Orlando resident peckish for your fave Disney dish. The servers are always friendly, and happy to recommend excellent dishes.

Not many restaurants on property are as loved as ‘Ohana at the Polynesian Village Resort, and for good reason. Can you eat there, and at other buffet/family-style restaurants, on your own though?

Well, the short answer is: yes.

Booking online, you’ll only be able to book for a minimum of two, however, over the phone you can book for one person or amend your online booking. Even if you book for two, the restaurants won’t really have a problem with you turning up on your own.

So while you technically can eat on your own at ‘Ohana and other restaurants, the question then becomes, should you?

While you may be seated as one, you’ll be served with the same portion sizes as two people. Does it end up being too much food? Let’s look at a few family-style restaurants and find out. Seating for one looks remarkably like a booth for many.

The Garden Grill is a popular breakfast spot in Epcot’s The Land Pavilion, where you meet Chip ‘n’ Dale, Pluto, and Mickey on a revolving restaurant. It’s famous for Chip’s Sticky Bun Bake which is, frankly, out-of-this-world amazing. It’s an incredible cinnamon roll. On top of that, you get skillets filled with Disney breakfast favourites such as eggs, sausages, bacon, potato barrels, and Mickey waffles, which can all be refilled when you’re done with them. It’s all very tasty, but is it too much? No, not really. The skillet is mostly packed with meat and eggs after all, and those scrambled eggs just fill in any available space. With a full day of Epcot ahead, I managed to fairly comfortably finish the skillet along with just over half the sticky bun. Unfortunately, they wouldn’t let me take the rest away. So if you’re the breakfast-eating type (and you should be when you’ll be walking up to ten miles every day) and you’re hungry when you get to the park, you should have no problem. Located in Liberty Square of the Magic Kingdom, the American Revolution-themed restaurant Liberty Tree Tavern serves Thanksgiving dinners all year round, although they do also have an á la carte option at lunch.

While this restaurant was a little awkward to attend as a Brit, my mind was immediately put at ease when the food was put in front of me.

Filled with mashed potatoes, turkey, pot roast, stuffing, green beans and accompanied by some mac ‘n’ cheese, it does feel like a lot of food. It isn’t though! The mac ‘n’ cheese is extremely bland, bordering on bad, so you can safely ignore the carb-filled pasta and attack the main attraction. It’s like a large dish at a restaurant, and doesn’t feel like it’s for two people at all. The dessert, the legendary Oooey Gooey Toffee Cake, comes in single-person servings anyway, and that slipped down nicely as well. Even though I was eating on the Disney Dining Plan, the price did seem very reasonable for one round of each course.

There’s a reason it’s called ‘Ohana. As we all know, ‘Ohana means “family,” and you either need to have not eaten all day or come with your family (or friends, friends can be family!) to make sure you get your money’s worth. Appetizers and accompaniments at ‘Ohana.

From the moment you sit down you’re being given a big loaf of amazing bread, a huge bowl of salad, and a dish of noodles, dumplings, and chicken wings. All of these would be enough by itself, but ‘Ohana’s specialty is the meat skewers brought straight to your table. Very quickly, the table for two feels like a small feast for four and if you don’t juggle your dining reservations/plans properly, you could end up stuffed by the time you’ve finished the first bits of freshly-carved steak. Which would be a shame as the Banana Bread Pudding that comes for dessert is spectacular. It also comes in a much more manageable portion.

I like to think I eat a lot, but ‘Ohana well and truly defeated me. Even my server was surprised.

Like any way you dine at Walt Disney World, planning is key. They’re definitely doable if you make sure you prepare yourself for a feast. You might need some kind of food-eating training montage for ‘Ohana though — although it’s all worth it for that bread pudding.