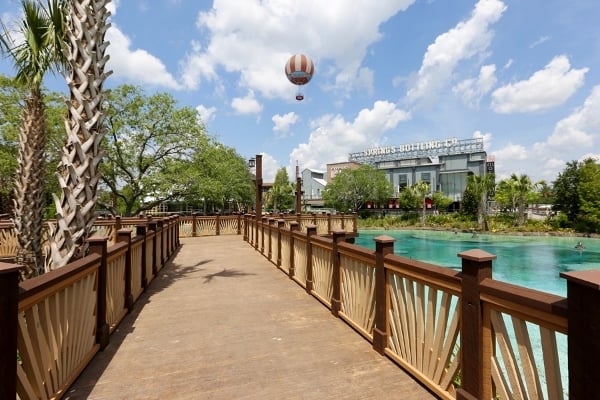 ShareTweetSubscribe
Disney Springs has been in the news a lot lately. Chefs from around the country are taking up residence, Town Center is bustling with a variety of shopping options, and nightly entertainment is becoming the norm. There's a lot to be done at the new complex; so much, in fact, that Disney Springs is more of a destination now rather than a quick "hit or miss" during one's vacation to the Walt Disney World Resort. Some are even claiming it to be Disney's answer to a "fifth gate." I decided to take a closer look at what exactly guests can find and do in a series of articles over the next several weeks. This is only the beginning.

There have been various attempts at rebranding what is now Disney Springs over the years. The complex started out as Lake Buena Vista Shopping Village, a component of the Florida Project that was not in Walt Disney's original plans in the 1960s. After reviewing his initial secret land acquisition, Disney noticed the available acreage near the I-4 and Highway 535 interchange and requested it be included in his purchase. He envisioned it as a potential entertainment and residential district. Nearly a decade later, the area opened to Walt Disney World guests. It included numerous boutiques and shops, many of which featured handcrafted items. The stores included Captain’s Tower, Gourmet Pantry, Bath Parlour, It’s a Small World After All Shop, 2Rs—Read’n & Rite’n, and Posh Pets. Any of these sound familiar? Although they are not necessarily "Mom and Pop" style stores, the current Disney Marketplace has stores like these today (think: Basin, The Spice & Tea Exchange, Mickey's Pantry, and the now defunct Tails pet accessories store). One of the handicraft shops at the Village was Pottery Chalet. There was also a candle carving shop and plant nursery.

In 1977, the area underwent a re-theming to become Walt Disney World Village. The new title and presentation made the area less confusing to guests visiting the resort. The shops adopted a more European boutique style and updated their storefronts to reflect this. The original Sir Edward’s Haberdasher store was one of the shops that updated its storefront and merchandise as time passed. Sir Edward's closed in 1992 after serving guests for close to 20 years. Shoe Time Operated from 1976-1987 in the Disney Shopping Complex

In 1989, the area became Disney Village Marketplace after another update, and Pleasure Island was added. The new nighttime complex centered around the mythological discovery of an abandoned shipbuilding operation of Merriweather Adam Pleasure; Disney designers decided to restore the area which became the popular 1990s location of several nightclubs, restaurants including the House of Blues and Planet Hollywood, a multiplex movie theater, and shops. Entertainment concluded each night with a New Year's Eve celebration.This portion of the complex is what many Disney guests grew to know as the "West Side" when the name Downtown Disney was adopted in 1997. The original shopping portion became dubbed Downtown Disney Marketplace. Pleasure Island opened in 1989 and provided adults with their own “pay to play” area at Walt Disney World.

Despite all of its changes, Downtown Disney held true to its original purpose of providing shopping opportunities away from the busy theme parks. Unfortunately though, the area began to die in popularity due to its lack of originality and the homogenized merchandising that was already prevalent in the parks. Likewise, a tremendous amount of backlash grew once Pleasure Island's nightclubs were closed in 2008. In fact, protests, petitions, podcasts, and even sit-ins were organized by guests in front of the most popular locations including The Adventurers Club and Comedy Warehouse. This led to even more feelings of discontent with the area and fewer guests began visiting. After bringing in live DJs and entertainers as attempts to lure guests back to the area, Disney Imagineers realized that a major overhaul was needed. In 2010, Disney announced a renovation to Pleasure Island to include new shops, restaurants, and even a lakeside park. The area would be called Hyperion Wharf in an attempt to attract new businesses and customers:

The district will come to life with a nostalgic yet modern take on an early 20th century port city and amusement pier. By day, stylish boutiques and innovative restaurants will draw you in and by night, thousands of lights will transform the area into an electric wonderland.

Taking its name from Hyperion, the Greek god of light, as well as the street on which Walt Disney built his first major animation studio, the wharf district will also feature a relaxing lakeside park and enhanced pedestrian walkways. And its diverse eateries will expand dining availability at Downtown Disney by more than 25 percent.

However, about a year into the project, Disney scrapped plans due to difficulties of getting new tenants in the shops of a location with a lingering bad reputation. Three years later, the current Disney Springs concept was proposed and soon thereafter construction began. With Universal Orlando's CityWalk experiencing significant success in the competitive market and development on I-Drive continuing, Disney knew it needed to change not just the Pleasure Island component to Downtown Disney, but the entire venue as well so that guests would find little reason to venture off property. In order to revitalize and connect the hodgepodge of sections together, Imagineers wrote the backstory of Disney Springs as we know it today: a small town that grew up around a natural spring, something that is quite similar to other locations in the Florida area. The Landing is just one of the districts in Disney Springs.

As the tale goes, the town developed over time, and more and more expansions occurred. This explains the different components now referred to as "districts" in Disney Springs, The Landing, Town Center, Marketplace, and West Side. "Each neighborhood reflects its function and its [fictitious] time period when it was developed," noted David Hoffman, a creative director at Disney Imagineering, during a pre-construction tour. Therefore, it served as the perfect way to unify the various sections of Disney Springs. Zara is one of the many contemporary shops located in Town Center.

The history of Disney Springs can truly help us appreciate not only where it came from but also what it has become today. To think that this bit of land was added as an afterthought to Walt's Florida Project still amazes me; the area has become synonymous with a Walt Disney World vacation. Now that the biggest transformation has been finished, it deserves a close-up. In my next installment of this series, we'll take a look at some of the newly added features to Disney Springs. Until then, happy shopping!

Born and raised in New Jersey, Nicole is an avid Disney fan and frequents both Walt Disney World and Disneyland several times each year. Interests include Walt Disney Imagineering, merchandise, dining, backstage tours, and more. You can also find her on The DIS Unplugged forum on DISBoards.com. Be sure to check out Nicole's other articles here on the DIS Blog and follow her on Twitter @DISNikkiBell for regular updates about all things Disney!