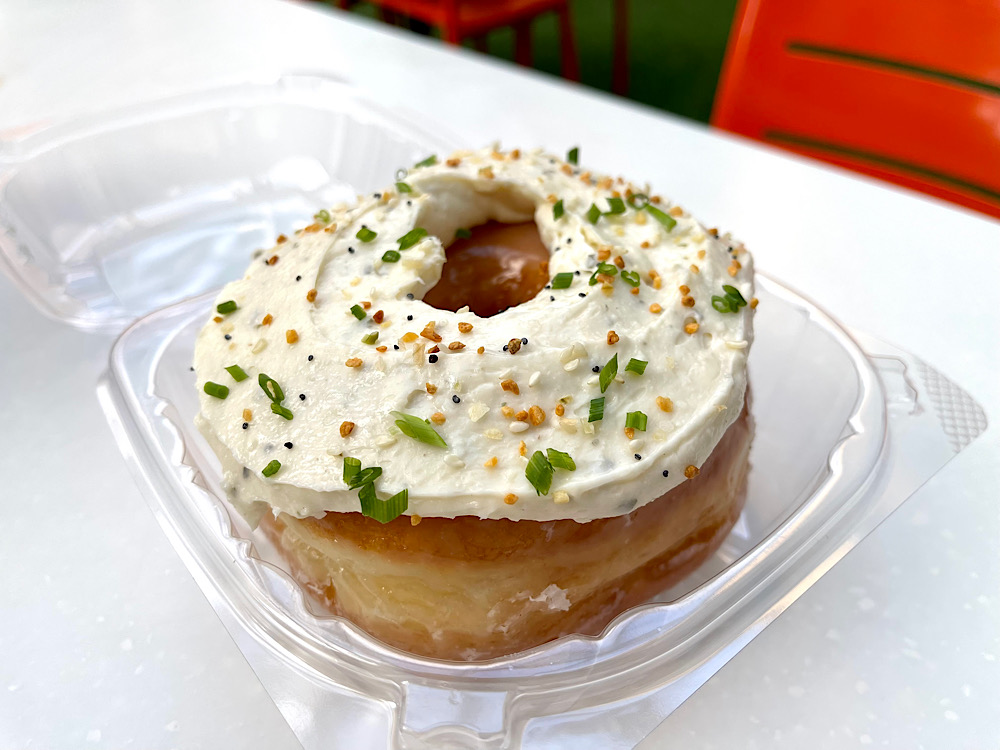 There’s a new donut in town, and being that our alter-ego is the Donut Information Station, I figured that trying it was a must-do. I’m not exactly sure who out there asked for a savory donut, but if you were among the select few, Everglazed Donuts & Cold Brew has heard your cry. Friends, the Everything Donut debuted today. Everything as in everything bagel?! Yes.

If you need a moment to fully digest the thought that an Everything Donut exists, take one. It’s understandable. Instead of a bagel, Everglazed’s signature glazed yeast donut serves as the savory snack’s foundation. Instead of a cream cheese shmear, the donut is topped by a buttercream that features Boursin cheese. Of course, as is only right with anything that channels an everything bagel, everything seasoning is sprinkled on top of the Boursin buttercream, with a few chopped chives thrown in for good measure.

The glazed yeast donut base was as it is in other Everglazed offerings: HUGE and sweet. The Boursin cheese buttercream is cold and, even as I write these words, I struggle to encapsulate it fully. I suppose that it could be equated to a sweet, less dense onion and herb cream cheese. It’s a creamy, cold, oniony and somewhat cheesy buttercream. I know, it’s a tough one to wrap your brain around, and yet, as I sit here, I think I like it. The sweet donut with the slightly sweet but mostly savory buttercream and savory everything else makes for one intriguing donut.

Don’t get me wrong; I’m not someone who loves everything bagel seasoning and will thus love this donut. You know me; I favor sweet things. My hubby? He’s in the demographic group for this donut; there are times that I think he’d choose everything bagel seasoning over me if it came down to a decision. That being said, as I listen to the debate currently ensuing in my noggin about this crazy donut, I have to say that I like it.

Be ye warned: you’ll be greeted with a wave of ONION as soon as you open the clamshell container. And this might not be the best snack choice for a date night. Ahem. Pass mints, please.

If you’ve tried Everglazed and all the sweet stuff just isn’t your thing, try the Everything Donut. It’s a fresh take on a beloved bagel, and for someone who loves savory snacks, it’ll be a welcomed thing.

The Everything Donut is $6.50 (annual passholder discounts available), is here for a limited time, and is available in limited quantities. When I arrived at Everglazed this afternoon, the baker was in the middle of prepping a fresh batch of the new treats, and the wait to receive a fresh one was 15 minutes or so. Not a big deal at all, but good to know.

Are you Team Sweet or Team Savory? Will the Everything Donut be on your must-eat list? Please let me know in the comments section below!