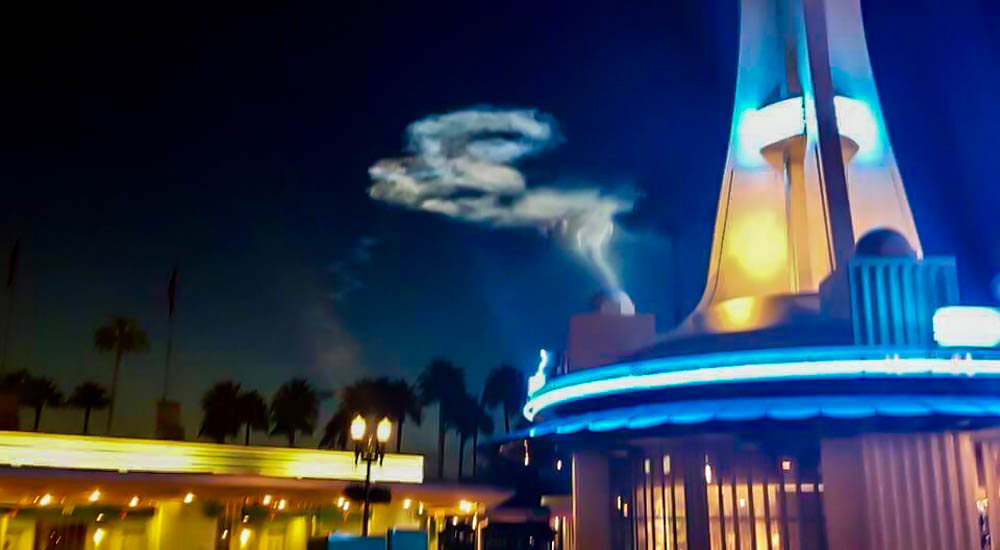 Clear blue skies above Walt Disney World have made it possible for Florida resident Tom Peterson to see a rocket launch from the resort twice. Both times, he captured images of the rocket contrail in the sky — first, from the Polynesian Village Resort in 2013 and again from Disney’s Hollywood Studios two years later.

It wasn’t something he planned, but it was a treat for him and his family.

“I honestly didn’t know it was scheduled, just happened upon it,” said Peterson, who runs his own marketing company in Clermont, Florida. He said he knows many people plan a trip to the theme parks, or a cruise from Port Canaveral, to coincide with a rocket launch.
Besides NASA, new space companies like Elon Musk’s SpaceX and Jeff Bezos’ Blue Origin are now planning more rocket launches from Florida than ever before in the history of space exploration. SpaceX alone has anticipated it may soon be launching once a week.

That means theme park guests have a better opportunity than ever to view a launch, even if they stay in Orlando, which is about 50 miles from Kennedy Space Center. A view from the top of a hotel, or a tall thrill ride, would be nice if you can time it that way.

Of course, the best way to make sure you see the launch is to be near the space center when it happens. Officials with the visitors center there are making big plans for more visitors.

Protze said Kennedy is expecting a 3 to 5 percent increase in tourist traffic over the next 24 months. The goal, he said, is to get tourists to PLAN their trip around a launch date, not just to see a launch if they happen to be in Florida.

During the age of space shuttle launches, crowds were big at the center as well as nearby Titusville and local beaches. That dropped off a lot after the shuttle program ended in 2011. But recent launches, like SpaceX’s maiden flight of the Falcon Heavy rocket in February, have begun drawing massive crowds again. It was estimated that around 100,000 people may have come to the Space Coast to view the Falcon Heavy, which carried Elon Musk’s personal red Tesla Roadster into space with a dummy named Starman in the driver’s seat.

In response to questions about launches and whether the company provides information to guests about launches, a Walt Disney World spokeswoman said Visit Orlando, the tourism agency for the area, would be a better place to look for information. Universal Orlando and SeaWorld locations are actually a tiny bit closer to the space center.

Disney Cruise Line ships depart from Port Canaveral, which is immediately south of Cape Canaveral’s launch complexes. Cruise ship passengers might have a chance to see a rocket launch nearby if the timing is right, but launch schedules are notorious for changing at the last minute due to weather or technical problems. The best overall website to see launch schedules for years now has been a niche online publication, www.SpaceFlightNow.com. Nighttime launches are especially dramatic. Like a star rising from the ground, the rocket’s light reflects off nearby water and is visible from all over Florida on some occasions.

Big crowds and traffic jams can happen even at awkward times like 3:31 a.m. (which is when a recent United Launch Alliance rocket, a Delta IV Heavy, launched NASA’s Parker Solar Probe on Aug. 12).

Protze said the visitor complex works with cruise lines to arrange buses and tours, but he declined to say if that included Disney specifically.

Daily Admission to the visitor complex is $47 for children and $57 for adults. For an additional cost, special launch viewing tickets are available for certain launches, and the complex has VIP viewing platforms set up. Protze said there are plans to add more platforms soon.

The complex has a new focus on letting the visitor feel like they are experiencing space itself, rather than reading plaques and looking at old space items.

The visitor complex just opened a new attraction, the Astronaut Training Experience (ATX), which includes things like a replica of a space capsule that astronauts ride in. The ultimate experience there is a 5-hour training course that costs $175 and includes the use of simulation technology, where a team of visitors “works together to solve real-world problems using authentic NASA science.” There are also shorter programs that cost $30 and $40.

Protze said the reaction to the ATX is “overwhelmingly positive, exceeding expectations.”

“Seven stories above the ground, on an open promenade you and your guests can see a launch like no other location in Port Canaveral. Use our high end telescopes to get a spectacular up-close and uninhibited view of the rocket before and during launch,” the Port’s website says. For example, the port had announced tickets of $25 in advance and $30 at the door to view the Parker solar probe launch.

The state’s marketing agency for space, Space Florida, rolled out a new campaign a year ago focusing on “Vacationauts” and offering a new website with info about launches, www.wearegofl.com.

Peterson said he thinks Disney could do more to cater to launch curiosity in the future, but the erratic nature of launch schedules would make that difficult.

“If Disney could hold an open event, say, on top of the Contemporary Resort, that might be something. But it would be very difficult for Disney to monetize an event they have no control over,” Peterson said. “Altering cruise schedules over this would not really make logistic sense, as cool as it was to see a rocket in the air above Disney.”