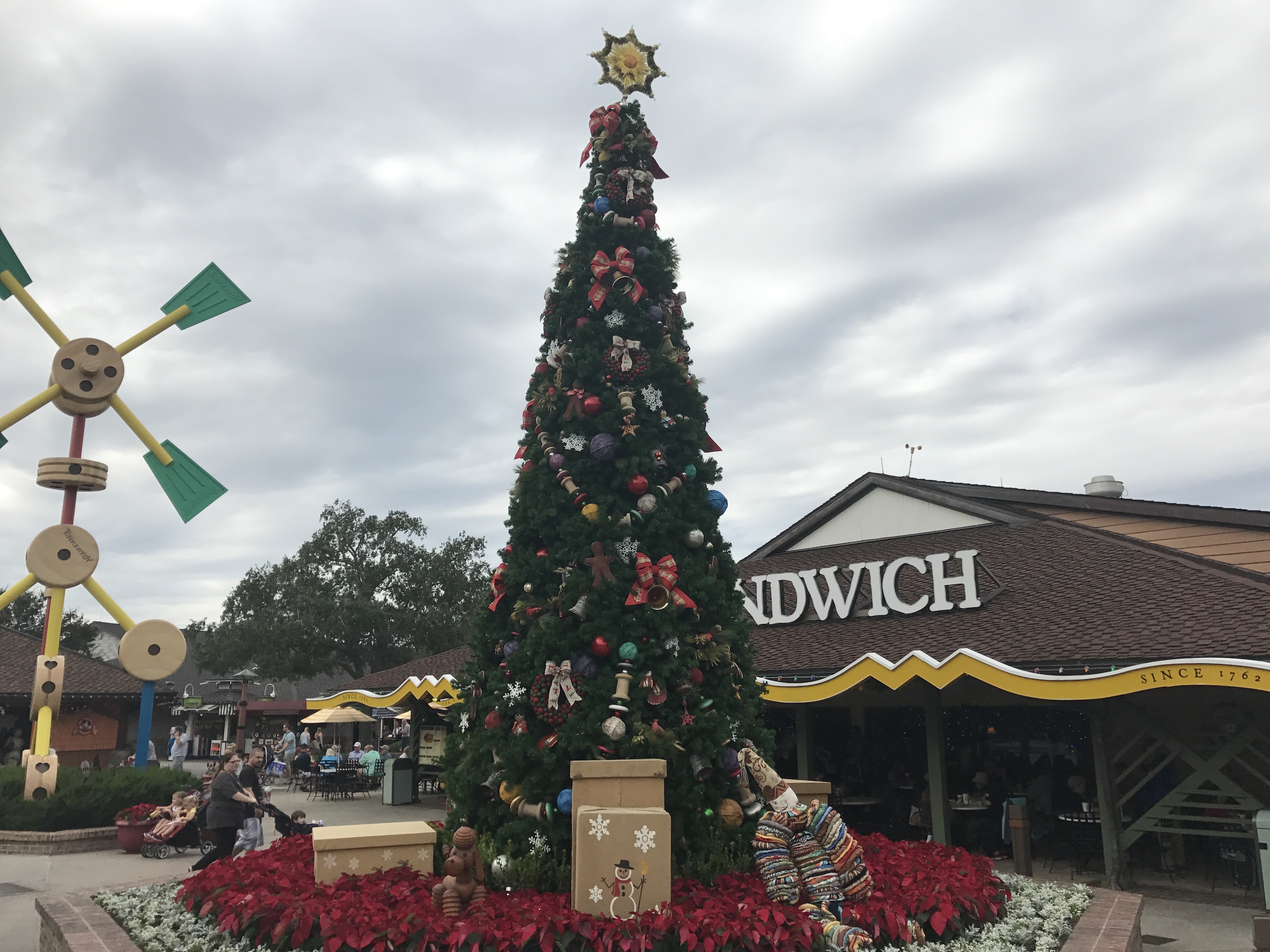 Last Friday I started this blog with an exciting day at the Epcot area hotels with Ryno, and special guest Brian. I promised you guys in the last blog that I would be some where different on Disney property for the next blog entry. Well I am back, and here to report to you another day at Disney. Today, Oliver and I spent a day at Disney Springs, and Disney’s Saratoga Springs Resort!

I arrived to Disney Springs, and parked in the Orange parking garage. I was a little early, so I decided instead of just sitting around in my car waiting for Oliver I would get out, and find something to do. I wasn’t really sure what I was going to do with this extra time, but when I stepped out of the parking garage I realized it was the first time I had been to Disney Springs since they put up all of the Christmas decorations. So I began running around all of Disney Springs like a mad man trying to get as many pictures as possible. I was particularly impressed by the decorations in the Town Center. I love the giant tree they have in there, and I especially loved the hanging garland because it reminded me of what Main Street U.S.A. used to look like before they stopped hanging garland for Christmas. Overall I was extremely impressed with how much Disney had decorated Disney Springs. Every inch of Disney Springs seemed to be covered, which actually kind of surprised me, because many of the actual theme parks don’t have that many decorations. Anyways half way though taking these pictures Oliver showed up. He wasn’t late, like I said, I just happened to be particularly early today. After I finished up taking these pictures I had to sit down for a little while I uploaded them to the DIS Unplugged’s Facebook page, so if you want to see them check them out there! While I was doing this Oliver was off shooting some video, but to be completely honest I forgot what he said he was filming. I’m sure what ever it was it’ll be great! We knew we would soon be getting a FaceTime call from either Craig or Ryno. If you don’t already know on Tuesday’s Oliver and I often FaceTime into the podcast, and report on what is going on, on Disney property. Today we showed the team the Christmas Tree Trail. The Christmas Tree Trail is essentially a walkway with differently designed Christmas trees that were inspired by many of the Disney movies. Oliver loved it, but personally I thought it looked extremely cheap. In my opinion it looked as if Disney went to Walmart with a thousand dollars, and bought a dozen fake Christmas trees, and then just threw a bunch of ornaments that matched the theming of the tree. Maybe I am being too harsh I just think Disney could have done a much better job.

After FaceTiming into the podcast Oliver and I had worked up an appetite. So we settled on Earl of Sandwich. We actually decided to make a vlog about our experience, so look out for that on our YouTube page! I won’t spoil too much we obviously want you guys to check out the vlog, but I will say it was worth the long line. After lunch we wanted to switch up our day a little, so I recommended we should go over to Disney’s Saratoga Springs. The rooms are really nice and spacious, but the layout of the resort is so confusing. The maps don’t seem to help, and I can never find my way around. So after walking in circles for 5 minutes Oliver and I finally found the lobby and the large pool. Out by the pool Oliver told me a little about what his experience as a lifeguard was. We then walked over to the Disney Vacation Club preview center that is actually located at Disney’s Saratoga Springs Resort. We really just wanted to take a peak inside to take some pictures, but unfortunately you have to schedule a tour, and they wouldn’t accept us as walk ins.

That about rounds up the day! I’ll be back with another blog after my next park day!