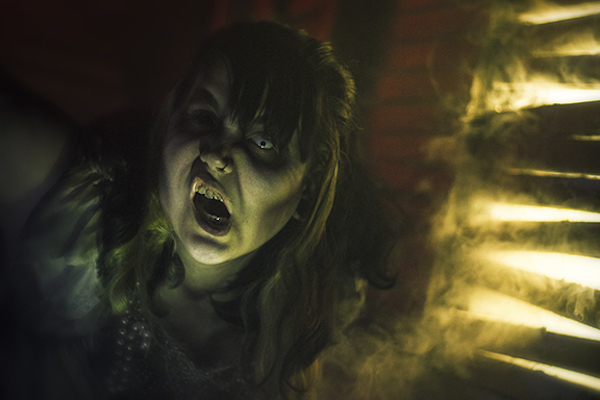 There is a funeral parlor in Old Town that belongs to the Ashdown family. Its history stretches back to the 1800s when these undertakers began offering quality funeral services. However, we are told that business went bad somewhere along the line.

To compensate for their dying enterprise, the Ashdowns adopted a new approach. Instead of waiting for new clients to come to them, they personally sought them out. And if their new clients weren’t already dead, they would be soon. It was a risky venture but a successful one, and the mortician company has survived all these years as a result.

Unfortunately, the souls of many victims have survived as well and continue to haunt the halls of this horror house. Their cries can be heard throughout, and their spirits seek retribution. As you tour the bowels of this macabre operation, it is a struggle to outlive the advances of the Ashdowns and the vengeful attacks of their dead clientele. Visiting Legend’s A Haunting at Old Town is a petrifying event. It is a combination of live actors, impressive sets, animatronics, and special effects that challenge your threshold of fear. Moving through the home, the storyline and experience progress in intensity until you are so panicked that your mind races to find the exit.

You pass through a waiting room, a viewing room, an office, a morgue, and an attic. Prepare to witness an autopsy and a lively wake as well. Each area has its own encounter that paralyzes you with fright before moving you into the next room.

The scenes are graphic and alarming with live actors who know their marks well. To make it through this haunt is truly an accomplishment because it is not easily done. One of the reasons that Legends is so effective in their mission to scare is because of how they organize the audience. Small groups no larger than six are taken in one by one. Everyone else waits outside until it is their turn to enter.

Forget the single file format of Halloween Horror Nights. The sense of protection from an unending conga line is stripped away. Outside of a few others with you, you feel alone, exposed, and vulnerable. It immediately puts you on edge.

The other bit of cleverness is that the attraction is laid out like a real home rather than a labyrinth. You actually stand and linger a bit in some of the rooms, and you can feel trapped at times. You aren’t safe moving on. You aren’t safe going back. You aren’t safe standing still, and there is an element of unpredictability at every turn.

It is also of note that the sets in the house are done well. There is a sense of texture in the details that is impressive. With special effects like fog, animatronics, holographs, and air blasts, it isn’t obvious from where the next scare is coming. What is obvious, though, is that the owners of this attraction have an interest in putting out a quality product that can hold in the theme park capital of the nation.

Due to the way Legends works with small groups, sometimes the wait is more than one might anticipate for a minor attraction. During peak seasons of mid-summer and the month of October, it isn’t uncommon to have a 30 or 40 minute wait. The demand for the house can be high. Luckily, this can be managed by planning a bit.

Visiting out of season or early in the evening can make a big difference. In fact, my group arrived on an October evening when it opened at 7pm. There already was another group waiting to experience the house; however, the wait was minimal because large crowds hadn’t gathered yet. I will tell you, though, that even if there had been a 30-minute wait, it would still have been worth the time spent in line.

It should also be mentioned that while Old Town is very family friendly during the day, alcohol is quite a bit more prevalent in the evenings. Alcohol is not permitted inside the Legend’s house; however, the patrons of the nearby bars sometimes pass in the street out front. It is unlikely that a problem would arise. In general, folks are incredibly friendly, and I have always had a good time during my visits to Old Town. I just felt it was worth addressing for those that might be caught off-guard by the adult vibe that exists in the evenings.

The last issue to present is that the Legend’s house is unable to accommodate physical handicaps. The attraction is in an older building with stairs, and it isn’t possible for a wheelchair to pass through. Also, due to the frightening nature of the attraction, there are other conditions for which the experience poses a risk. Bottom line: this is not an attraction for everyone, and those that have health concerns or other questionable conditions are advised to not enter. Legend’s A Haunting at Old Town is terrifying. I really enjoy a good haunted house, and this one is possibly the most frightening I’ve ever experienced due to the way that it operates. The people involved with the attraction know their craft and execute it well. Moving through, I didn’t feel like I was just observing a scary scene. To a degree, I felt as if I was living an event. At times, it genuinely got inside my head. It was 15 minutes of screaming and laughing. I could barely catch my breath by the time I hauled my behind through the exit. Through it all, though, I had a hilarious time, and I will be returning again.