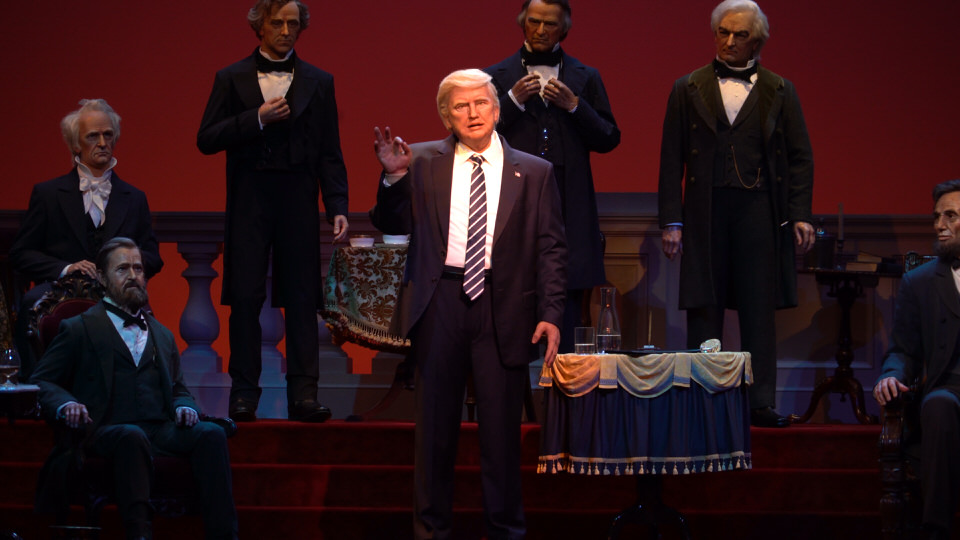 On Tuesday, December 19, 2017, The Hall of Presidents officially reopened after a lengthy refurbishment in which President Donald J. Trump was added along with a new video, score, narration, and upgraded technology. Although I didn’t make it out the soft opening the night before, I was able to experience the attraction three times on the morning of its grand reopening. I’ll preface my review by saying that I’m not a person who openly discusses politics. In fact, my stance is that of Linus van Pelt – “There are three things I have learned never to discuss with people: religion, politics, and the Great Pumpkin.” This review has nothing to do with politics, but instead, it will focus on the merits of the attraction. Let’s get started. Before making it inside the theater for The Hall of Presidents, the first changes you’ll see will be in the lobby. The entire area has been refreshed slightly and there is even more to see than ever before. Definitely take some time to go through and look inside all of the display cases and you may find yourself learning something new. The added presence of Walt Disney inside the lobby is also greatly appreciated. Moving onto the show, The Hall of Presidents is different right out of the gate. The program starts out with a dedication to Walt Disney before fading up from black and picking up in the aftermath of the Revolutionary War with a new, chilling score subtly playing in the background. Gone is the Declaration of Independence opening and a grander story of the war and how General Washington rose to power through his victories. Instead, the story jumps into why Washington was chosen to be the first President of the United States and how he set the framework for future Presidents to follow. A beautiful montage highlights all of the Presidents between Washington and Lincoln, and then Lincoln gets a chance to deliver the Gettysburg Address. From Lincoln, the story moves on to the accomplishments of Theodore Roosevelt and Franklin D. Roosevelt in two beautiful, moving segments. The final video segment includes a montage from some of the more modern Presidents starting with Eisenhower through Obama highlighting a significant moment during their time serving. This is very similar to the previous iteration of The Hall of Presidents but just spiced up a bit with new graphics and imagery. This leads to the reveal of all of the Presidents standing in front of an image of the White House and as the Presidents are announced you see how the White House has changed over the years. Finally, Washington stands up to deliver his short message about taking the Oath of Office and then President Trump speaks for the first time. President Trump recites the Oath of Office and then delivers his speech, which is themed around the American people. With one final message about the importance of the President of the United States, the show comes to an end after nearly 22 minutes.

In my opinion, The Hall of Presidents has always been a beautiful show, and I believe that this show is every bit as good as the last iteration, but they are two completely different shows. The Morgan Freeman narration in the last show told a story of patriotism. It is hard to beat anything narrated by Freeman, and the new show’s narration doesn’t quite live up to it. That being said, I believe the story in this new show is a lot stronger and dropping the exposition about Washington, the sequence on Andrew Jackson, and changing the Lincoln section to differentiate it from Great Moments with Mr. Lincoln at Disneyland are all positive changes.

The new technology put in place for this show makes it more visually impressive than it’s ever been before. The graphics in the first half of the story are brighter and vibrant and look brilliant with the seamless screens. There was nothing wrong with the slideshow aesthetic from the old show, but I prefer the more cinematic approach in this version. The score fits this show very well too and like any good score it blends perfectly with the visuals on the screen and is never distracting. The new background of the White House during the President section of the show is such a massive upgrade and it is hard to imagine it looking much better than it does. As for President Trump, the speech that was written for the show is completely neutral, but still has a positive, uplifting message, and I don’t think anyone can argue with that. In terms of his animatronic, there were some questionable decisions made during the design process. I will say, from the back of the theater the animatronic didn’t look too terrible, but as you can see in close-up pictures, there is not a strong likeness to the President except for the hair. Many have noticed that the facial structure looks very similar to Hilary Clinton’s, leading to speculation on what was happening at Walt Disney Imagineering, but I’m not going to comment on this. In my opinion, none of the recent Presidents have looked extremely similar to their animatronics, so there is no point in nitpicking at this one, but it is a big topic of discussion. The animatronic itself moves in a very lifelike way, much like the other animatronics that you find in Disney Parks lately. The thing to watch for is President Trump’s hand gestures during and after his speech. Disney may not have matched his face perfectly, but they nailed his mannerisms.

Finally, the one big change that I noticed during the morning of the grand opening was the addition of two security guards in the theater. In the three shows I attended, no one caused a disturbance and everyone was completely respectful. The first show was filled with minor applause, but by the third show the reaction from the crowd was overwhelmingly positive, and I can understand why. At the end of the day, it doesn’t matter where your politics lie or who you voted for. What matters is that we all understand the importance of the role of the President of the United States and how we’ve had many Presidents from many different backgrounds, but their purpose is always the same – to serve the people. Whether you love or hate our President, all I can say is give the show a chance. Disney has put together a very impressive and different production from what we’ve seen before with The Hall of Presidents. No video can truly do the show justice, so maybe take a chance and check it out during your next trip to Walt Disney World.