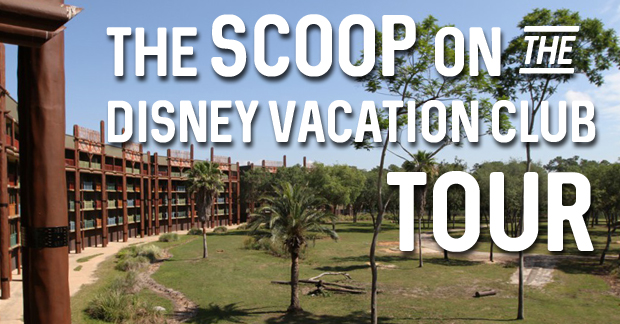 What do you do when you’ve got a few days off of work that you didn’t expect? You throw together a spur-of-the-moment trip to Walt Disney World of course.  My wife and I were in grad school at the time, and we even skipped our Friday classes to have some fun, but at least we didn’t miss any work! We packed up our things and drove 6 hours for a 4-day weekend in Orlando in mid-February. No kids, no friends, no family, just the two of us and the parks.

Growing up, we only went to Walt Disney World about every 6 years. Having just been to WDW for our honeymoon the year earlier, we ended up taking our weekend trip very casually. We went back to the hotel every afternoon, and we never had that “rush” mindset in the parks. So, when we were walking in the Asia section of Disney’s Animal Kingdom and a Disney Vacation Club cast member waved us down, we decided to see what she had to say. The DVC cast member took this photo of us in the Asia section of Disney’s Animal Kingdom.

Maybe you’ve seen these cast members. I don’t know how you could not see them. They’re everywhere! You’ll often see a little kiosk with binders on display and a cast member with a name tag that says Disney Vacation Club. If you flip through the binders you’ll see amazing photos of all of the wonderful Disney Vacation Club Resorts and Villas.

The cast member will probably invite you to take a tour. If given this opportunity, I highly recommend taking it. Even if you don’t feel like you want to lose your valuable park time or you’re not interested in the Disney Vacation Club, I still recommend it. Why? It’s a great break in the day to step back from the constant push and shove and just relax. If it’s the middle of the day, you can get out of the heat, and get inside where it’s cooler. But the primary reason is for the awesome perks that come along with the tour.

My wife and I have toured in both Walt Disney World and Disneyland. On the trip to WDW I mentioned earlier, we made arrangements to meet a driver outside of Animal Kingdom at a certain time. We didn’t have to go right that minute, we were able to enjoy the park for a few more hours and then wander out to meet our driver.  He took us over to the Saratoga Springs resort, I believe, to the DVC Preview Center.

There, we received light refreshments as we waited for a representative to speak with us. Then they ushered us into a small room where a sales rep explained all the details of the Disney Vacation Club to us. We even watched a brief video on the TV in the room. We were newly married and still in grad school; we had no intentions of signing up, but it was still great to hear, and there was zero pressure to join. After a half an hour or so, we made our way to the exit where we were treated with free ice cream and three FastPasses each that were good for just about every ride where FastPass was accepted. We had a similar experience several years later in Disneyland. We were hanging out at the Grand Californian mid-afternoon when a DVC member approached us in the lobby area. We got chatting and she asked if we would like to see the new Aulani model rooms. We said sure, so she called a vehicle for us, and 15 minutes later we were on our way to the DVC Preview Center that’s behind the Disneyland Hotel. At the time, we had a 10 month-old child, but not to worry, the DVC van had several child seats in it that we were able to buckle him into.

This tour was slightly different than our one at WDW. We received the light refreshments, brief discussion, and video again, but we were able to cut out the sales pitch after we told them we’d done this before and just wanted to see the Aulani model rooms. They took us to the rooms and told us all about Aulani. Our whole stay was about 20 minutes. They still gave us three free FastPasses each, even for our son, who couldn’t even ride a FastPass ride, so that was pretty cool. There was no ice cream this time, sadly. Overall, it was a pretty decent experience. If you feel you can spare the time, I’d definitely recommend taking the tour, if for no other reason than to get the free goodies that come along with it.

One word of caution: If you are seriously considering buying-in, please remember that it is a timeshare and you are purchasing real estate. It is not a decision that should be made lightly or on impulse. Don’t feel pressured to buy-in right then. Go home, let the wonder of your vacation wear off and then think it through rationally before making any serious decisions.