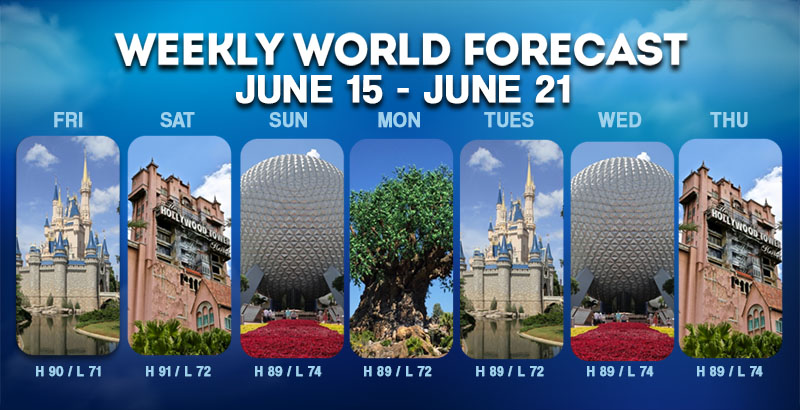 When I was a child, I would sit with my mother and work out the details of our Disney vacations and one of the biggest issues we had after choosing our dates, booking flights, and choosing a resort was deciding which park to visit on which day! We checked the weather, we checked available FastPasses, we checked dining availability and anything else we could think of to figure out in what order to visit the parks. I decided, “I should just share my thoughts with the world on my research,” so I created the Weekly World Forecast.

Friday, June 15 – I’m going to give today to Magic Kingdom. It will have early Extra Magic Hours, but that shouldn’t be a huge deal. It is technically supposed to rain (it’s Florida, so who knows?) and it’s supposed be in the 90s temperature-wise. That sounds like a really terrible combination and I usually recommend Hollywood Studios, but I am saying Magic Kingdom because it has more air conditioned spaces. There are enough indoor rides and lines that you should be alright doing those in the hottest parts of the day and then saving outdoorsy stuff for night time, or in the morning when arriving.

Saturday, June 16 – Toy Story Mania is currently closed, it’s going to rain, it’s very hot and humid, and I’m still going to give this day to Hollywood Studios — with caution. If you are just arriving to Disney, wait until Tuesday or Wednesday for this, but for the general population, today should be a good day. If I were booking your vacation (which I can, at www.dreamsunlimitedtravel.com) and you could somehow be comfortable with not getting to do Toy Story Mania, I would tell you that people who want to ride that are just going to wait and go to this park next week. Locals have no real reason to go here during the rain/heat and with a major ride closure. This would allow you to do the major thrill rides here with shorter wait times. As of me writing this, Hollywood Studios has every single FastPass still available during Saturday morning; that’s a good sign.

Sunday, June 17 – For Sunday I am going to suggest Epcot. It was a toss-up between there and Animal Kingdom because it will be cloudy most of the day but not raining. For whatever reason, these two parks get really hot and a cloudy day is nice there. I feel like Animal Kingdom has a little more to offer right now, because of Pandora still being so popular and you have locals to compete with on weekends as well as other tourists.

Monday, June 18 – For the same reasons as yesterday, the toss-up was between Epcot and Animal Kingdom. Now that people are back to work, or possibly leaving if they came for a long weekend and are now driving/flying home, you might have a better shot at having shorter wait times at Animal Kingdom.

Tuesday, June 19 –  Magic Kingdom is a good park for Tuesday because it should be kind of cloudy but not overly storming. It has long hours but not Extra Magic Hours, so you should still be able to have a full day at Magic Kingdom. It will be hot but a little wind should take care of some of that; I would still bring your leashes for the children just in case.

Wednesday, June 20 –  So, I was trying to get ideas for things to do with kids at Epcot because people say Epcot is boring. I love it, but the kids have spoken and Disney created Kidcot Fun Stops for them so they can have fun with Duffy the Bear while you stand in line for wine. I admit I was skeptical of Duffy at first and I’m not thrilled with his Shellie-May Clampett counterpart either but they have really grown on me. I love going to color a Duffy and getting people from all over the globe to write my name in their native language with flags. I also am usually the only adult participating so I would feel better about this if I could peer-pressure some other adults into coloring Duffys too. So Wednesday, take your kids over to Epcot and color a Duffy and post pictures in the comments below!

Thursday, June 21 – Finishing up the week I am going to say to go to Hollywood Studios. Toy Story Mania will be back open but it will have 2 days for the people who needed to do it for their trip to go ahead and get it done. This should allow your family to avoid the immediate rush.