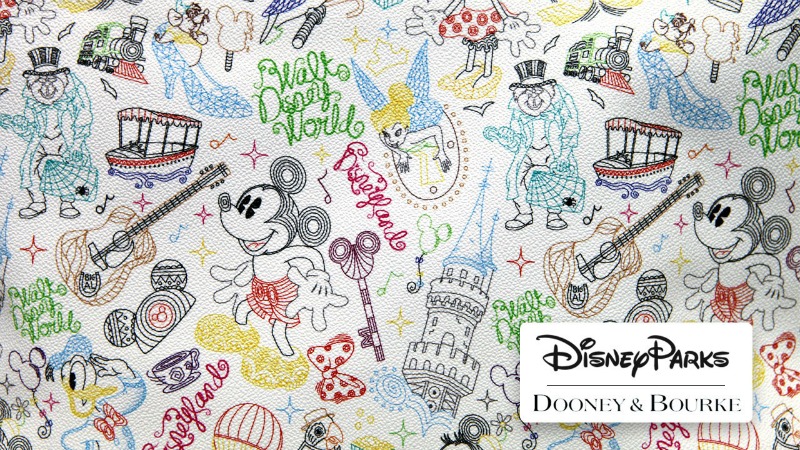 Do you remember years ago when the very first Disney Parks Dooney & Bourke design was released? As it turns out, that has been one of the most popular collections and it has recently received a bright and artistic refresh courtesy of Paola Gutierrez, Senior Graphic Design with Disney Consumer Products and Interactive Media Creative Group. “We wanted to update the ‘Disney Sketch’ collection, which was originally introduced more than eight years ago,” explained Paola. “The new collection called ‘A Walk in the Park’ was drawn in a coloring book style, and has a nice nod to memories from Disney Parks. Guests will still find beloved Disney characters like Mickey Mouse and Donald Duck. They will also find characters and icons from Disney Parks such as Big Al’s guitar from the Country Bear Jamboree or a Hitchhiking Ghost from the Haunted Mansion.”

There will also be a limited-release MagicBand in the ‘Walk in the Park’ design that will be presented in a specially designed box. There are two brand new designs to look forward to as well! The first one is an addition to the “Dream Big, Princess” collection with handbags inspired by Disney’s The Princess and the Frog. The handbag shown above contains an impressive image of Princess Tiana and will have a specially designed leather hangtag.

The second handbag is inspired by the Haunted Mansion attraction and will be part of a Madame Leota-themed collection.

“These handbags will be released on July 22 at the Marketplace Co-Op in Disney Springs. Guests attending this launch party will also have the opportunity to meet Ian Ray, Creative Director for Dooney & Bourke from 10:30 a.m. to 12:00 p.m. These collections will also be released at Disneyland Resort on the same day.”

You can find Dooney & Bourke handbags in select shops at Disney Parks, on DisneyStore.com, or via the Shop Disney Parks app on your mobile device.