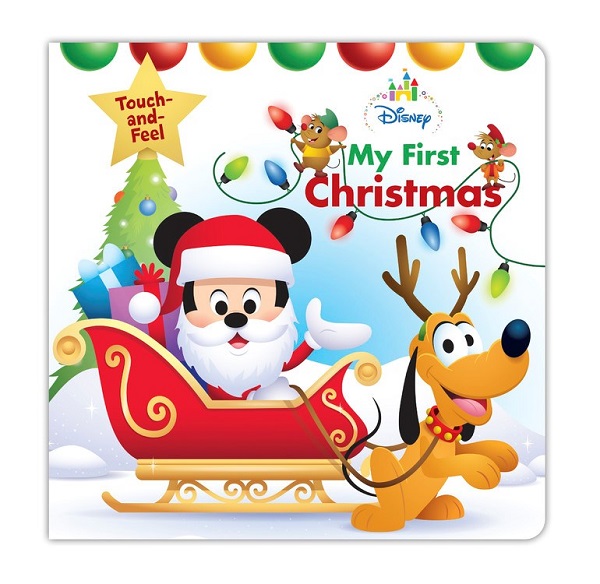 Who are the hardest people to buy for on your holiday gift list? Typically, its Disney fans. Here is a list of “must-have” books that should be in any Disney fanatic’s library or even your own

For the little ones, preschool and up, “Disney Baby My First Christmas (Disney Touch and Feel)” is a beautifully illustrated, 12-page book, touch-and-feel book with easy-to-turn thick pages perfect for baby’s hands. In addition to colorful Disney characters – classic and new – the pages have different tactile experiences such as a soft and fuzzy Santa beard, bumpy snowflakes and sticky candy canes. (Price: $8.99).

Greg Pizzoli gives the 12 days of Christmas a new twist in his new book, “The 12 Days of Christmas.” The main character is an elephant, aptly named Elephant, and she quickly learns there can be such a thing as too many gifts. As the twelve days go on, the gifts keep coming in this whimsically illustrated 56-page book. It’s a perfect book for any age, not just preschool through kindergarten. (Price: $10.00).

In a double header – for the Disney and Broadway fan, Disney Editions has recently released “The Lion King (Celebrating The Lion King’s 20th Anniversary on Broadway): Twenty Years on Broadway and Around the World ” by Michael Lassell and “My Pride (Broadway’s Record-Breaking Lion King): Mastering Life’s Daily Performance” by Alton Fitzgerald White.

Debuting on Broadway in 1997, Disney’s The Lion King musical is celebrating its twentieth anniversary and “Disney’s The Lion King: Twenty Years on Broadway and Around the World” covers not only the Broadway production, but every production around the world. This 224-page book traces the origins of the show from the blockbuster animated film to stage and includes stories from the creators and actors. The book also features never-before-published sketches and photographs from the many productions around the world. (Price: $50.00).

Part biography and part inspiration, “My Pride: Mastering Life’s Daily Performance” by Alton Fitzgerald White is an excellent book for biography buffs and those looking guidance in any aspect of their life. Holding the Broadway record for having performed the role of Mufasa, 4,308 performances, White takes the reader on a journey of not only what it’s like to break into and succeed in the entertainment business, but also a look at how he got there. It’s an amazing book that will make you pause and reflect on your own life. (Price: $24.99).

With three outstanding new books on The Walt Disney Company and the man himself, Disney Editions hasn’t forgotten the Disney nerd. “Yesterday’s Tomorrow: Disney’s Magical Mid-Century” by Don Hahn, is a fascinating look inside the mind of Walt Disney and his Imagineers. It’s an oversized, 176-page, hardcover book filled with stories about Walt’s varying interests including Disneyland, transportation, entertainment centers, the World’s Fair, and more. The book also features rare, never before seen photos and drawings. (Price: $40.00).

“Eat Like Walt: The Wonderful World of Disney Food” by Marcy Carriker Smothers, is by far one of my favorite books on Disney history. Yes, Disney history. It takes a unique look at Walt and Disneyland through food, what he liked, what was and still is served in the park. (Price: $35.00).

“Ink & Paint: The Women of Walt Disney’s Animation” by Mindy Johnson tells, for the first time, a complete and detailed history of the women who made a significant contribution to the success of the Walt Disney Company and in the field of animation. At 384 pages, it’s an extensively detailed book filled with photographs, diagrams, drawings and artwork – many of which have never been seen before now. (Price: $60.00).