The Bumpy Start to Disneyland Paris 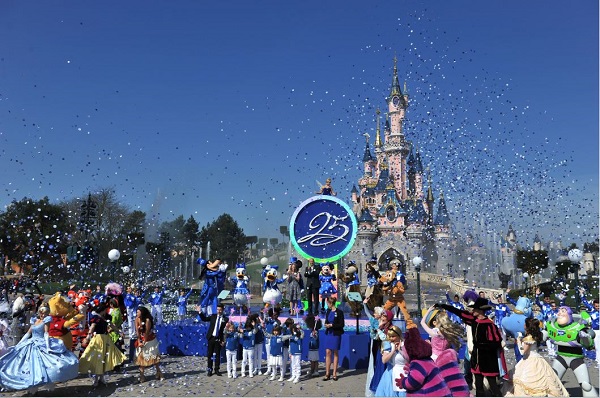 This April will mark the 25th Anniversary of the opening of Disneyland Paris. To celebrate this magnificent milestone, the park has planned some new and exciting events and experiences. On March 26th 2017, Guests at Disneyland Park began to experience the following special attractions and events including Star Tours: The Adventures Continue and Star Wars Hyperspace Mountain (Disneyland Park). In addition, a new parade made its way through the park, Disney Stars on Parade, where favorite Disney Stars, together with stunning new floats, create magic and happiness for all. Guests also enjoyed a new show daily show Mickey presents “Happy Anniversary Disneyland Paris” at Disneyland Park where Mickey Mouse will start the celebration by assembling as many of his famous Friends as possible for a huge anniversary party. Disney Princess fans enjoyed some of their most beloved Princesses as they host their own show The Starlit Princess Waltz at Royal Castle Stage (Disneyland Park). As exciting as all this sounds, Disneyland Paris has caused a number of headaches for The Walt Disney Company.

On February 10, 2017, Disney announced plans to increase their ownership of Disneyland Paris and eventually take full ownership of its only European theme park.

At The Walt Disney Company’s annual shareholders meeting Iger said, “We did make an announcement that we are attempting to buy in what is left of the public ownership of that entity. It was a business structure that was set up when we opened. It had public shareholders with separate trading stock. We believe that the best path forward, in terms of managing that business successfully — and creatively by the way — is for us to be the primary owners, or the sole owners really, of that business, because that will give us the ability to make the kind of investments that we’d like to make to continue its success.”

According to Orlandoweekly.com, “In 18 of the past 25 years, the 5,510-acre, two-park resort has recorded losses.”

In the early 1980’s, The Walt Disney Company begin talking about a theme park and resort complex in Europe. In 1981 they solicited international bids from various countries including Germany, Spain and France. Spain and France were the leading contenders – Spain for their weather and France for its central location.  France won out for a number of reasons: 1) access to the site by a large European population, 2) France – particularly Paris – was an extremely popular vacation destination and 3) Disney was hoping to take advantage of Europe’s generous vacation practices.

When the park opened on April 12, 1992, it was known as the Euro Disney Resort.  The Walt Disney Company, under CEO Michael Eisner, announced in May 1985 that it intended to build a European Disneyland park. The location, which was not announced at the time, would be selected by September. On December 15, 1985, Eisner and French Prime Minister Laurent Fabius signed a letter of intent to build a Disney theme park on 4,400 acres at Marne-la-Vallée, 20 miles east of Paris.

According to Legislative Council Secretariat, Euro Disney’s projected cost was estimated around US$1 billion with Disney’s initial financial arrangement to hold 49% equity in the project. The French government would put in a cash grant and a loan, as well as finance much of the infrastructure. The park was to be ran as a non-government concern. The final costs for the park were closer to US$5 billion, primarily due to design and construction changes.

In a Harvard Business School’s Euro Disney: The First 100 Days they wrote that Euro Disney’s projected attendance for the first year was 11 million visitors and projected operating income was $373 million. In reality, Euro Disney attracted 10 million visitors the first year and 9.8 million in 1993. Subsequent attendance growth was projected at 2% annually for 20 years, compared to 3.8% at other Disney parks. Additionally, the park did not meet its projected operating income budget either. In the 1993 Euro Disney Annual Report, Philippe Bourguignon, Chairman wrote, “Today, I find myself in the difficult situation of delivering unwelcome news, all the more so given the optimism of the pre-opening period.”

There were a number of factors that contributed to the difficulties Euro Disney experienced and its US$4 billion debt including a severe economic recession in France, unfavorable exchange rates and high interest rates (double the estimates). This caused, among other things, little or no sales of property and hotels (due to the collapse of the French property market) and lower guest spending. “Finally, the imbalance in Euro Disney’s financial structure has become such a burden that it is jeopardizing the very existence of the Company,” writes Bourguignon.

Euro Disney’s Phase I opening consisted of a theme park and lodging and recreation facilities. The theme park included 29 rides and attractions, as well as six themed hotels, a “Davy Crockett” campground, 27-hole championship golf course and a variety of shops, restaurants and live entertainment venues. According to the Harvard Business School, Euro Disney: The First 100 Days, report “Research Disney conducted on European travel to the United States showed that the three things tourists were most interested in seeing were New York, Disneyland and the western United States. As a result, the complex was the most ‘Western American’ of all Disney’s parks. Three of the six hotel properties, the ‘Cheyenne,’ the ‘Santa Fe,’ and the ‘Sequoia Lodge’ had distinctly western flavors. An attraction which had been called ‘The Rivers of America’ at other parks was called ‘The Rivers of the Far West’ at Euro Disney, and a ride which in the U.S. and Tokyo had been set in a New Orleans styled mansion was in France set in a mining town of the old west.” Other considerations given to Euro Disney was that although signs were in French and English, French would be the primary language of the park. They striven to insure Disney’s best-known characters and themed-lands had a European flavor, for example the Peter Pan attraction featured Edwardian-style architecture, Cinderella lived in a French Inn and Snow White’s home was in a Bavarian Village.

Other issues Disney encountered were the ire of the French (and some Europeans) not to serve wine or alcohol in the park. Those that wanted to have an alcoholic beverage had to go to Festival Disney, an entertainment complex outside of the theme park. They also tried to combat concerns that the French didn’t like to wait in line, they were not accustomed eating fast meals at off hours and other issues.

Staffing and training also posed another unique issue. Disney needed to hire and train 14,000 employees to fill 12,000 jobs before opening, as well as another 5,000 temporary jobs for its peak season. Prospective Cast Members had to get used to working for Disney. They [Disney] had a set of standards that had worked for them at their other in the U.S. and Asia, but Europe was different. Cast Members had to get used to working longer hours than at other French companies, Disney also encountered resistance around their strict grooming requirements (ban on facial hair, always keeping hair and fingernails neat), dress code, no colored stockings and a policy of “appropriate undergarments.” Although Disney was successful in staffing and training cast members for opening day, however within the first nine weeks a large number of Cast Members left Euro Disney. In May 1992, The Hollywood Reporter, stated that 3,000 employees had resigned due to unacceptable working conditions. Shortly after, Robert Fitzpatrick, chairman of Euro Disney, told The Wall Street Journal it was only 1,000 people (about half left on their own).

As a result of lower-than-expected attendance for the first year, Disney tried a number of plans to correct the situation including slashing hotel rates by 25% at their value resorts and slashing 300-400 Imagineering jobs. This typically happens though once a project is completed as a number of the Imagineers are contracted workers. According to Solaris.com Disneyland Paris Brief History, “In 1994 the company was still having financial difficulties. There were rumours [sic] that Euro Disney was getting close to having to declare bankruptcy. The banks and the backers had meetings to work out some of the problems involving the financial problems facing Euro Disney. It was in March 1994 that Team Disney went into negotiations with the banks so that they could get some help for their debt. As a last resort, the Walt Disney Company threatened to close the Disneyland Paris park, leaving the banks with the land.”

The company made some big changes in 1994 including a major financial restructuring to reduce its debt by US$1 billion including 24 months’ forgiveness from paying interest on approximately US$3 billion, a 3-year postponement on paying back the principal, among other concessions. In addition, Disney also agreed to wait its rights to management fees from 1992-1998 and slash their fees from 6% to 1% of park revenues. In 1995, the park was able to post its first profit of US$23 million.

As the years went on Disneyland Paris stayed relatively consistent, however it rarely made a profit.  Disney was determined to make a success out of Disneyland Paris, according to a recent story in Variety, Cynthia Littleton writes, “Disney has also pledged to invest as much as $1.6 billion in Disneyland Paris to improve financial conditions that have been ‘significantly and negatively impacted by the November 2015 events in Paris and the challenging business conditions that continued through 2016 in France and throughout Europe.”

When Disney announced their plan to take full ownership of Disneyland Paris last month Bob Iger said, “Today’s announcement reflects The Walt Disney Company’s continued confidence in Disneyland Paris and in France, and will enable Euro Disney to continue improving and investing in the Resort.” With The Walt Disney Company now in charge, expect to see some exciting new changes in the next few years.