Book Review: The Disney Story: Chronicling The Man, The Mouse & The Parks 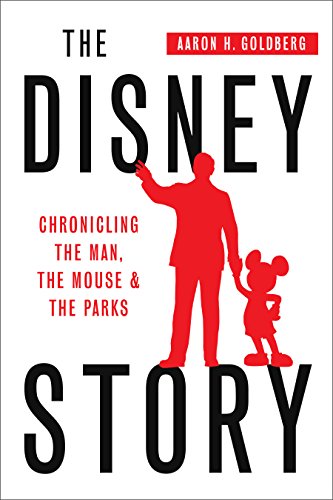 Goldberg’s book, The Disney Story: Chronicling The Man, The Mouse & The Parks, presents Walt Disney, The Walt Disney Company and the Parks decade-by-decade. It’s a well-written book that starts in the 1930s with Steamboat Willie and concludes in 2016 with the opening of Shanghai Disney.

What makes this book unique is that Goldberg supports the topics he covers with actual stories from newspaper and magazine articles told word-for-word exactly as these outlets reported. “Instead of my words telling the story,” says Goldberg. “You’ll get a chance to read the hundreds of other voices that told the Disney story over the decades, along with the most important voice of all, Walt’s.” The other thing that makes this book unique is that every quote and story that Goldberg features in the book can be found, in its entirety, online at www.thedisneystory.com.

Although he doesn’t, nor could he, cover everything that happened every year, Goldberg does an excellent job of including the major events in each decade. In the 1930s, Goldberg talks about the birth of Diane Disney and how on December 18, 1933, Walt had to leave in the middle of an award ceremony for him to rush to the hospital for Diane’s birth. He also discusses the introduction of Technicolor to Disney animation and the premiere of Snow White and the Seven Dwarfs.

One of the many interesting tidbits about the Snow White premiere is that the biggest names in Hollywood – Myrna Loy, Spencer Tracy, Mary Pickford and others – paid $5.50 each to attend the premiere! The 1940s, saw the Walt Disney Company going public, as well as Walt’s trip to South America, the release of Song of the South and Bambi, among other milestones. The 1950s and 60s were very big years for Disney and brought about a lot of changes for him [Walt] and the Company. Goldberg spends a good deal of time on Walt’s foray into television and the opening of Disneyland. He also discusses the popularity of Davy Crockett. Basically, Davy was the Elsa of his day.

The 60s gave us the introduction of Audio-Animatronics, Disney’s participation in the 1964-65 New York World’s Fair, the release of Mary Poppins, the announcement of the “Florida Project” (Walt Disney World) and sadly, the death of Walt Disney. The 60s chapter is full of amazing stories, but what I found fascinating was that if it wasn’t for Joan Crawford, the ”it’s a Small World” pavilion for the 1964-64 NY World’s Fair may have never come to fruition. The 70s cover a number of stories, including the opening of Walt Disney World and the passing of Roy O. Disney. Goldberg discusses his thoughts on the New York Times obituary headline about Roy’s death by saying, “in what is probably one of the worst newspaper headlines I have ever seen.” The 80s cover the opening of a number of new Parks including EPCOT, Tokyo Disneyland, the Disney-MGM Studios, the beginning of the Michael Eisner era and other events. The 90s went in depth about all the changes Eisner was making, as well as the renaissance of Disney Animation, but the most interesting story was the announcement from Disney’s Buena Vista Television for a nationwide lottery program. Yes, you read correctly – LOTTERY. Needless to say, gambling and children’s programming didn’t mix well and it was abandoned.

We finally reach the 2000s and in true Disney fashion, big changes continue to unfold. Goldberg has a lot of area to cover here and does an excellent job touching on what are considered some of the most important events in Disney history, including the downfall of Michael Eisner and the succession of Bob Iger, as well as the opening of a number of new parks under Eisner and Iger. We also see, under Bob Iger, the acquisition of Pixar, Marvel and LucasFilms Ltd.

The Disney Story: Chronicling The Man, The Mouse & The Parks is a must-read book for Disney fans of all levels. Additionally, spend some time exploring all the articles Goldberg links to on his website. They make for fascinating reading and will give you a new appreciation and understanding of the world of Disney.

Chronicling The Man, The Mouse & The Parks