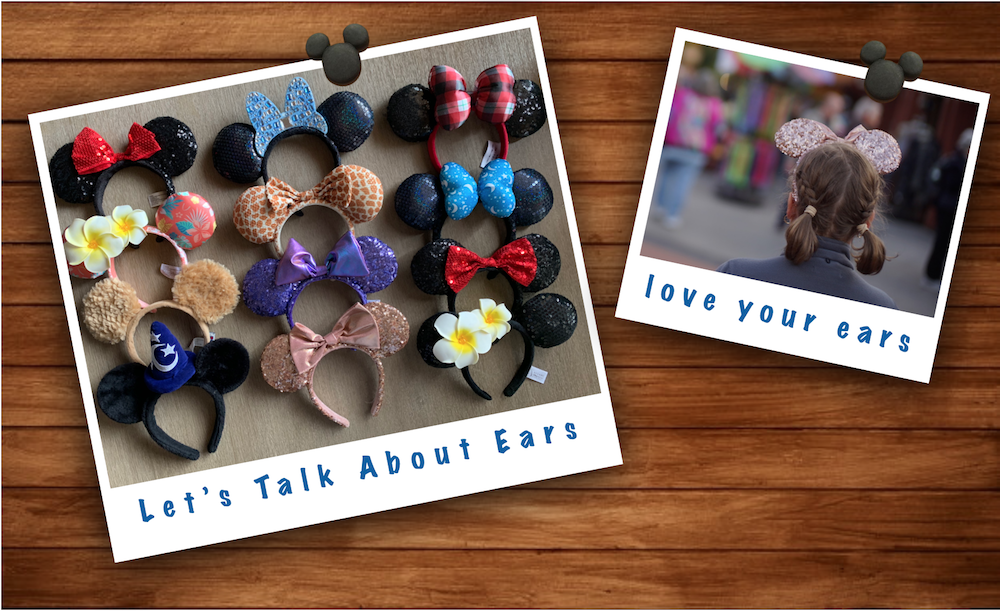 Even though Mickey ears first became popular in the 1950s with the Mickey Mouse Club, my first pair didn’t make their way into my Disney wardrobe until many years later. It was 1990 when my sister and I became the proud owners of the older style of ear hats, freshly embroidered with our names across the back.

While my sister wore hers with pride, I, the trouble-maker, itched and complained and fussed with the poisonous string of pure evil that dug into my neck like a torture device. Other people called it elastic, but to me, it was trying to quietly extinguish my life with every second that it pressed against the underside of my six-year-old jaw. When we returned home to Australia, the ear hat of death took its place on my shelves never to be worn again. I thought my time enjoying Disney headwear had come to a sudden and premature end. I was sad; I was disappointed. My head was lonely.

It wasn’t until many years later when I invested in my own destiny by purchasing the sparkly sequined version of the classic black with a red bow Minnie ear headband that I began to respect the legend of the ears.

My sister and I were some of the first to be wearing them, perhaps because they felt like they were made for children back then, giving you an unrelenting headache within the hour. It was important to press on though, embrace the indentations that were permanently carved into your skull and accept that once again, beauty is pain.

As presumed, the photos were worth it. I like to think that it was the unique sight of two sisters wearing these headbands at a time when hardly anyone did that started the revolution that is Disney ear fashion. Did we though? Of course not. As if two Aussie teens were going to change the marketing game of a corporation like Disney! Nonetheless, we wore them as though we were Gaga-style born that way.

Soon after, Disney began to introduce specialty ears, releasing new designs for special occasions, park anniversaries and eventually just because it was Tuesday. While Casey, the above-mentioned sister, managed to keep her ear collection in check, I, the wild and crazy one, chose to take a more elaborate and expensive route. I became drawn to new designs and colors and while I have never been a fan of the character-themed ears, a new bow color or festive sparkle will always catch my eye.

This obsession has been genetically passed down to my daughter as well. With all her tween mood swings and smart-arse remarks sometimes it feels as though we only have three things in common: blond unruly curls, hazel eyes and an unspoken respect for the Minnie ears. I’ll take it. Disney saves the day again.

For her, the life choice of being a themed headband wearer was cemented into place when she was 7 years old. Having just spent a week in Walt Disney World, we were making the journey home via Disneyland for a few days when every 10th person in the park stopped to comment on her glittering giraffe-print Minnie ears that were fresh, and exclusively, out of Animal Kingdom. Everyone had something to say; even cast members inquired with genuine curiosity and interest. The attention was enough to keep her toothless smile present the whole day. As you can imagine, they were never taken off from this point onwards — and with this, our joint collection grew

The beginning was easy: As kids we were only able to visit the parks once a year or so due to the whole living on an island on the other side of the planet thing, so grabbing a new pair here and there didn’t cause any problems at all. It wasn’t until this year that I found a downside to my glittering passion.

It was early November in 2018 when I struggled to decide which pair to take back to the parks. We were visiting both Disneyland and Disney World; I mean, you can’t wear the same ears to both coasts, right? I limited myself to picking only two options. Two. Brutal. With a tear in my eye and a sigh in my breath, I put the short list to an Instagram vote and closed my eyes as the internet decided my ear fate for 2018.

Within the hour, the votes were in. Classic Black Sparkles with puffy blue bow and Special Edition: Disneyland 60th. My daughter swooped in to steal my beloved Rose Gold ears from the pile and off we went carrying only three pairs between us. I felt violated by a crowdsourced verdict of my own initiation. I felt naked.

We arrived at Walt Disney World a week into our coast-to-(almost)coast road trip where I spotted the new holiday collection for 2018. Oh my, Disney, stop it already, those are too cute not to take home with me! Like a natural-born professional, I sift through the ears and select the pair with the most forgiving headband in an effort to survive the feeling of them resting spread-eagle on my massive noggin for 12 hours at a time.

Roll your eyes if you must, but these ones have a festive red band that none of my others have — so that’s new. And, they have this gorgeous tartan bow in the middle. And, I don’t care, I love them. That last point is accompanied by a matching festive finger gesture.

During our last trip to Aluani, A Disney Resort & Spa in Ko Olina, Hawai’i I was stopped in my tracks to see not one, but two exclusive sets of Hawai’ian-inspired ears that come complete with a pair of perfect little frangipani flowers.

The first is your standard sparkling black ear headband with two off-center flowers, perfect for nighttime or to compliment a more sophisticated look. The second is a beautiful, vibrant island pattern, mostly in tropical pink and blue tones featuring a flower and leaf design. These also come with two pretty little frangipani flowers well secured to the headband.

When confronted with such a sight, what else can one do other than simply buy both? The answer is nothing, there is nothing else to do but buy both.

And so the exclusivity returns to my Minnie ear collection.

Is there a meaning to this article? Not really, just that if having a selection of ridiculous character headbands that you will probably never wear anywhere else makes you happy, buy them and be happy. My husband manages to look at me as though I have just told him I want a third child anytime I appear remotely inclined on buying more. For those of you who are not privy to my two-hands, two-eyes, two-kids rule, that look is one of shock, horror, and the sudden onset back sweats for both of us if caught by surprise. Unless I grow a third of any of those things, another person ain’t happenin’ either!

A tip from one pro to many others reading along: Simply prefacing the new ear purchase with a throwaway comment about wanting another child/cat/dog/expensive Mickey Mouse bedspread is usually enough to draw all attention away from a little $20 investment in my happiness I am about to make. I can enjoy my new ears while my husband recovers from the cold sweats once he discovers it was just a diversion technique.